A silent wife is a suspicious and subservient wife.

That’s the message of Donald Trump over the weekend as he turned his ire, with trademark condescension, to the Khan family. Khizr Khan spoke of his family’s sacrifice when his son, a captain in the Army, was killed in Iraq in 2004. Ghazala Khan did not speak during her husband’s July 28 remarks at the Democratic National Convention but stood next to him. 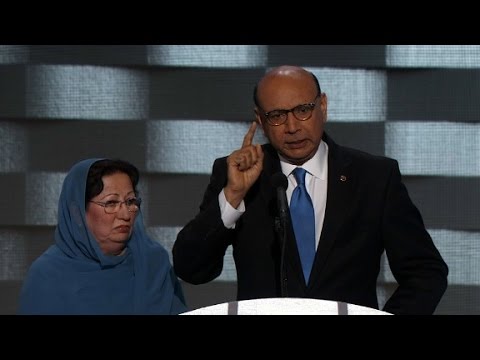 Her silence became the fodder for Trump's attack:

“If you look at his wife, she was standing there, she had nothing to say, she probably — maybe she wasn’t allowed to have anything to say, you tell me,” he said in an ABC News interview this weekend.

The implications of Trump’s rebuttal are clear: Ghazala Khan’s silence was a product of her gender’s place within Islam — and not a mother’s suffocating grief during an overwhelming public moment. (She has since spoken out with a Washington Post op-ed explaining why she didn’t speak.)

While Trump’s jab was seemingly intended as anti-Muslim commentary, he also managed to tap into the broader cultural zeitgeist, the gender riptides of wives and voice — or its complement, wives and silence. There are two dynamics at play here. The first is that voice matters. The second is that a wife's silence in relation to a husband’s outspoken voice demeans her worth.

Trump is hardly a champion of women’s rights. But his comment seized a cultural meme — our contemporary expectation that women should give voice to their own experiences, that our voices matter and should be heard. However, Trump appropriated this feminist battle cry against women in his take-down of one specific female target. His argument hinges on the premise that because Ghazala Khan chose not to speak, and because she allowed her husband to — in a de facto way — speak for her, that we should be suspicious of her and her values; that she is not modern, and therefore she is not one of us.

Silence is not always suspicious. It can also be indicative of strength.

After all, in Trump’s world, and in the lives of his defenders and detractors alike, voice is power and speech commands attention.

The flip side is that silence speaks volumes.

One does not have to be a visual studies scholar, nor a psychologist or a social worker, to “hear” Ghazala Khan’s “voice” during her husband’s speech. One just has to be open to a human experience. Her resolve, pain and strength not only amplify her husband’s remarks but contribute to their meaning.

Yet for Trump there is only value in voice when it makes a sound.

This brings us to the second conjugal dynamic that Trump’s comments raise: Wives who are silent don’t respect themselves. We are living in a time when vocal women, and wives, are having a moment. It's not just Hillary Clinton who is making this possible — it's also the high-profile convention speeches of Chelsea Clinton and Ivanka Trump that are showcasing powerful women's voices. And there's also the brash, stick-it-to-you bravado of Sen. Elizabeth Warren. (Of course, Melania Trump's outspoken debut backfired. But plagiarism will do that to you.) Today, society increasingly teaches women to speak up and "lean in." So, intentionally or not, Trump’s argument — while aimed as an attack on Muslims — also triggers the very American belief that speaking up for oneself is testament to voicing one's worth. And wives who choose silence transfer their worth to their husbands.

Still, silence speaks. And we must listen to it.

After all, Trump made a grave mistake and there is now serious fallout — even from his Republican peers — for attacking this Gold Star family. Because even as Trump tapped into a collective suspicion of quiet wives who stand next to vocal husbands, he is grossly misguided to conflate a mother’s grief with gender subservience.

Silence is not always suspicious. It can also be indicative of strength. Ghazala Khan’s “silence” tears through our screens and implores us to recognize her experience and feel her pain. It would be an act of inhumanity to be unmoved by the power of her presence. Words be damned.

Hinda Mandell Cognoscenti contributor
Hinda Mandell, a Boston-area native, is associate professor in the School of Communication at RIT in Rochester, New York.