Over the weekend, our president threatened to shut down the federal government if Congress doesn’t fund his Border Wall, a wall he promised Mexico would pay for — repeatedly.

We also learned that the Republican National Committee paid a quarter of a million dollars last month to the president’s private club, Mar-a-Lago, a flagrant violation of the emoluments clause of the Constitution, which forbids the president from using his office to generate profit.

Oh, and a private member of Mar-a-Lago was allowed to delay a $16 billion project to update the VA’s digital records system.

Which is to say, high-powered journalists interested in covering “real news” had plenty of grist for the mill. Instead, most of them spent weekend whining about comedienne Michelle Wolf, who appeared at the annual White House Correspondents’ Association dinner. 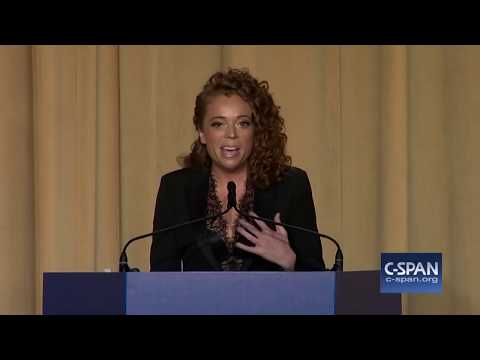 Is it any wonder the president’s hysterical shrieking about “fake news” resonates with his supporters?

The loudest voices in our free press are driven almost entirely by the pursuit of profit, not the truth. At the top of that list are the right-wing propagandists who get paid millions to exalt the grievances of their predominantly white, male audience — the folks who forged Trump’s base.

But it also includes the so-called “mainstream” media, who have acted as Trump’s loyal press agents from the moment he entered politics.

Michelle Wolf roasted lots of folks during her remarks, which was her job. But the comment that offended the assembled media A-listers most was the one they knew to be most disturbingly true:

"You guys are obsessed with Trump. Did you used to date him? Because you pretend like you hate him, but I think you love him. I think what no one in this room wants to admit is that Trump has helped all of you. He couldn't sell steaks or vodka or water or college or ties or Eric, but he has helped you. He's helped you sell your papers and your books and your TV. You helped create this monster, and now you're profiting off of him."

As much as journalists hate to admit it, our Fourth Estate has been in a tacit alliance with Trump all along.

Heck, they created Trump. The incessant coverage of his rallies and rants — remember all those feeds of empty podiums? — was what granted him the appearance of legitimacy. Without this attention, Trump would have remained a fringe figure, a demagogue and conman desperate to fan racial resentment into audience share.

Don’t believe me? Here’s how the chairman of CBS, Les Moonves, explained it in February of 2016, speaking at a media conference sponsored by Morgan Stanley:

“It may not be good for America, but it’s damn good for CBS … Donald’s place in this election is a good thing. Man, who would have expected the ride we’re all having right now? … The money’s rolling in and this is fun. I’ve never seen anything like this, and this is going to be a very good year for us. Sorry. It’s a terrible thing to say. But, bring it on, Donald. Keep going.”

Ultimately, Trump and his cabal will be held accountable only if we hold ourselves accountable.

Every reporter and pundit and politician who is wasting time defending or debunking Wolf’s routine — rather than focusing on the kleptocratic aims of this administration, or the simple fact that Flint, Michigan still doesn’t have drinking water — will be judged by history. Not just as peddlers of fake news, but as the failed guardians of democracy.

The president’s ardent enablers will never hold him accountable for his corruptions, because they elected a bully to make them feel safe, not an adult who would govern.

Therefore, the rest of us need to recognize our own complicity in this cycle. If we continue to focus on offensive tweets and comedy routines, our profit-mad media outlets will continue to feed us fake news.

Ultimately, Trump and his cabal will be held accountable only if we hold ourselves accountable.