Now that Joe Biden has formally announced his candidacy, the Democratic field is (let us hope) complete. I favor the candidates with the most ambitious plans to address climate change, income inequality and corruption. But I’ll happily support Biden if he’s the nominee, because he’s a genuine public servant.

Biden is something much more common: an old white guy who can’t accept that women find his pattern of unsolicited touching and hugging gross. What I find most revelatory is the way Biden attempts to apologize. I say “attempt” because many of the statements he considers apologies are not, in fact, apologies. They are strategic expressions of remorse that actually seek to disavow personal wrongdoing.

The video he released seeking to address the women whom he has made feel uncomfortable was a classic example. “The boundaries of protecting personal space have been reset,” Biden notes. “And I get it. I get it. I hear what they're saying. I understand it. And I'll be much more mindful. That's my responsibility.” 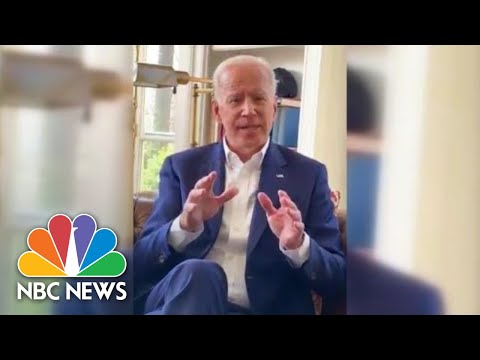 If you missed the apology, you’re not alone.

Biden has also been pressed to apologize for his behavior toward Anita Hill during the confirmation hearings of Justice Clarence Thomas — behavior overlooked at the time, but despicable when closely examined — and has played word games instead.

His campaign noted that Biden “had a private discussion where he shared with [Hill] directly his regret for what she endured.”

Did you note that tell-tale slip into the passive voice? Joy Behar, on “The View,” did. She pressed Biden to man up. "Here's your opportunity right now to just say you apologize, you're sorry. I think we can clean this up right now."

Wow. The way she was treated? Biden can’t even bring himself to say: “I’m sorry for the way I treated her.”

Why? Because, not very deep down, Biden isn’t really sorry: “I’m not sorry for anything that I have ever done,” he noted in a recent speech. “I’ve never been disrespectful intentionally to a man or a woman.”

As a man, I’m quite familiar with this move. The idea is to put the onus on other people’s sensitivity, not your own insensitivity.

To be clear: this isn’t an exclusively male tendency. But men are far more apt to issue these mincing mea culpas. I’ve spent a lifetime doing so. The history of my marriage can be measured by this pattern: I behave in some hurtful way, my wife points this out to me, I make excuses, counter-accuse, and finally express remorse, but often in a way calculated to frame the situation as a “misunderstanding.”

Why do I do this? Because men are socialized to believe that acknowledging you’re in the wrong is tantamount to surrender, to losing face. This is why male apologies so often have these little escape clauses:

I’m sorry if you were offended …

I’m sorry that you felt that way …

I’m sorry if I yelled, but I was reacting to your provocation …

What all this redounds to is the fragility of the wounded male ego. It may be that Biden is also being strategic, that he’s playing to centrist voters who don’t think he needs to apologize because they feel the reckoning wrought by the #MeToo movement has gone too far.

Which is to say: Biden is both exhibiting the fragility of the wounded male ego and pandering to it.

And why not? One of the darker truths revealed by the 2016 election is that a significant minority of the electorate is terrified of female ambition, of living in a world in which white men are actually held accountable.

How else are we to explain the ascent of the world’s most insecure bully, a man who is the walking embodiment of wounded male ego, who represents the perverse fantasy that refusing to apologize makes you invulnerable?

Every male presidential candidate ... enjoys a huge inherent advantage, thanks to the ingrained sexism of the electorate and our media

If Joe Biden wants his candidacy to stamp out the “aberration” of the current regime, he needs to drop the unctuous hedging and start acting like the leader of a party that pushes not only for equal opportunity, but equal accountability.

Every male presidential candidate — including those on the Democratic side — enjoy a huge inherent advantage, thanks to the ingrained sexism of the electorate and our media. This is why Bernie Sanders, for example, earns instant kudos for being unapologetic about his millionaire status. He was being strong. (It's also how Beto O’Rourke can joke about being a “part-time” parent; and how Pete Buttigieg, surging in the polls, can get away with being so thin on policy.)

The question that looms over the 2020 race, and over America as a whole, is this: Why can’t exhibiting humility and apologizing be a form of strength?

Steve Almond Cognoscenti contributorSteve Almond is the author of the novel “All the Secrets of the World.” He’ll be teaching several Workshops for Democracy this fall.