You may have heard The Rev. William Barber wow the audience at the Democratic National Convention with his call for a "moral defibrillator" to jump-start American ethics.

Now, Barber is taking his message on the road with his new Revival Tour. He's one of the organizers of the North Carolina Moral Mondays movement, where he held weekly vigils in the state capital calling for a progressive agenda.

Hear more in our View From The Top conversation series. 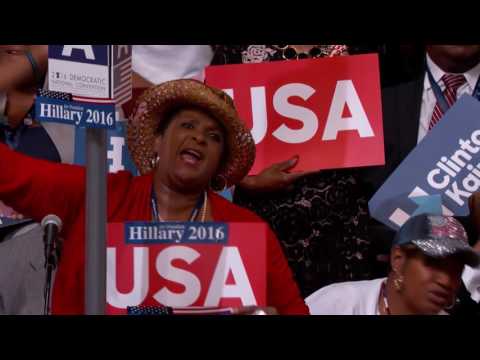 On his quote from his DNC speech, “when religion is used to camouflage meanness, we know we have a heart problem in America”

That is in fact counter — when they say they're going to put their support behind a candidate that's openly racist, and openly promoting xenophobia — that's deeply problematic. And we've seen that before in history. There were those who claimed to be religious, claimed to be Christian, who stood up against Dr. [Martin Luther] King, who, in the late-1800s stood up against those who tried to reform this country and try to move it away from the vestiges of slavery. So we've seen this before, and it has to be challenged.

"Every major progressive thing that's happened in America — from the ending of slavery, women's suffrage, the New Deal, the Civil Rights Movement — always had a deep moral underpinning."

“I wouldn't separate the two. I think that's a false dichotomy. The Bible is deeply political, but it's not left versus right or Republican versus Democrat. If you read the scriptures, for instance, Isaiah 10, it says, 'Woe unto those who legislate oppressive degrees.' That was a direct challenge to the political structure of 2,600 years ago. Or you get Jeremiah 22, where it says, 'Go down to the king's palace and tell him not to pass policies that hurt children and hurt women.'

So it's not a Democrat-versus-Republican politics, but it's calling us to move our politics to higher ground. We've seen this. Every major progressive thing that's happened in America — from the ending of slavery, women's suffrage, the New Deal, the Civil Rights Movement — always had a deep moral underpinning where people moved away from their particular parties and said, ‘There are some things higher, based on our deepest principles and deepest values.’”

"Well, we have a large contingency of young people in the Moral Monday movement in North Carolina. For instance, many of them were involved in civil disobedience. One of the ways you do it is you re-frame the imagination. Young people are not so much interested, again, in this left-right issue. They're interested in, ‘How do we deal with some issues that are just right versus wrong?’

The fact of the matter is we have this legitimate rage and outrage about the killing of African Americans, unarmed African Americans by police. It's not an anti-police position. It's actually a pro-police position, because bad cops make it bad for good cops, and good cops would be challenging bad cops. And so young people are saying, 'we're going to challenge racism.' But that's not the only racism. You have the false incarceration, the high incarceration rates of African Americans that are deeply different than our population rates in this country.

We not only must deal with those issues. We must deal with race in terms of policies like voter suppression. Policies, for instance — when you deny living wages, 54 percent of African Americans make less than a living wage. So we need a grown-up conversation about race. We need to ask this question, 'Why is it that in the poorest counties and areas of this country, they continue to elect candidates who are the most adverse to the policies that would help the poor? When in fact, you have 8 million more poor white people than you have black. You have five million more white people than Latinos that are poor.’ We need a grown-up conversation about race and class in this country. And our young people are pushing us to do that."

The Rev. William Barber, pastor of Greenleaf Christian Church in Goldsboro, North Carolina, president of the state’s NAACP and co-organizer of Repairers of the Breach. He is also author of the book "The Third Reconstruction." He tweets @revdrbarber.

View From The Top