As the nation celebrates Martin Luther King Jr. Day, the nation's first black president is getting ready to leave office.

Here & Now's Robin Young looks at the legacies of both men with Peniel Joseph (@penieljoseph), a scholar of African-American history and professor of public affairs at the University of Texas at Austin.

On his critique of Obama's presidency

"My criticism of Obama has to do with, really his policies and not going far enough. Because what King offers us is a real searing critique of the flaws and shortcomings within American democracy. But he also asked all of us to look at ourselves and see how we're participating in these machines of materialism and militarism and racism.

"And I think Obama, he's done great speeches, but I think in a policy sense, at times he has not gone far enough, whether it's, we think about the criminal justice system, mass incarceration, whether we think about talking about poverty. King dies in Memphis, Tennessee, he's assassinated helping sanitation workers who are on strike. Obama's had to be much more of a pragmatic politician than the kind of crusader for truth and justice and love that King was during his lifetime."

"[King] envisioned a more expansive democracy than the founders had ever conceived or imagined, and I think that's the greatness of King, that he saw greatness within the country, but he was willing to say that we all had to work for it..."

On Obama's and King's legacies

"I think [Obama's] had it both ways — on one level, he adopted the mantle of King for many voters. On the other side, he says he's president of all people. So I think when it comes to King's legacy, you have to embrace the entire legacy. I think what we are more comfortable with is picking and choosing, and saying, 'Well, we agree with nonviolence,' and then we stop short when King talks about economic redistribution.

"The greatness of King's legacy is that the idea is they transcend presidents and election cycles, and they force us to confront this idea of the beloved community, and this community that abandons war, that abandons violence, that abandons materialism, in favor of a real love ethic, which King said was connected to public policy and legislation and legal breakthroughs, but transcended those because we were gonna change minds and hearts at the same time." 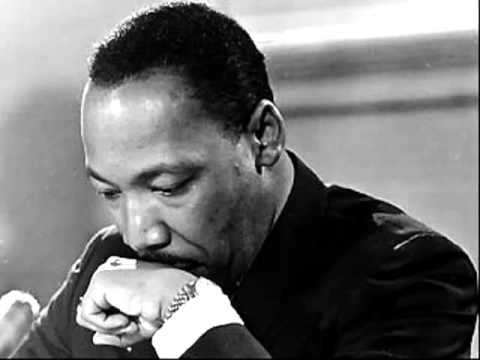 On King's 1967 speech about the Vietnam War, and how he came to embrace a "more dynamic militancy"

"This is the King who's really speaking truth to power. So this is a King who's being rejected by Newsweek, who's being rejected by Time Magazine, the New York Times, they say he shouldn't mix civil rights and Vietnam. And it is a King who never embraces violence, but actually understands and embraces aspects of the Black Power movement's radical critique of liberal, democratic capitalism in the United States.

"I think that that is absolutely in the Kingian tradition of that love ethic, and for King, justice was what love looked like in public. And so when we think about the Black Lives Matter movement — and really all these different social movements that have been coming out in Standing Rock and in other places — these are movements about radical humanism, and that's King's philosophy. Just because you put the word 'black' in front of 'lives matter,' it doesn't make it less universal, it makes it more universal, and in this case, you just get to the universal through the particular."

On King and the American democracy

"I think what King teaches us and reminds us when he talks about the 'great wells of democracy' from the 'Letter from the Birmingham Jail,' is that the United States, this democracy, is something that's always living, growing and breathing, and he envisioned a more expansive democracy than the founders had ever conceived or imagined, and I think that's the greatness of King, that he saw greatness within the country, but he was willing to say that we all had to work for it, and he was willing to call out the country's shortcomings, even though it's a country that he loved enough to die for and give his life for to transform it."

This article was originally published on January 16, 2017.