A 22-year-old Dutch man has an ambitious plan to try to clean plastic from the ocean by installing long booms in the water, near the so-called Great Pacific Garbage Patch, to collect trash swirling in the currents.

Boyan Slat founded the nonprofit The Ocean Cleanup in 2013, and he's managed to raise millions of dollars for the project, which is on track to get underway next year.

On inspiration for the project

"When I was 16 years old, I was diving in Greece and I realized I came across more plastic bags than fish, and thought, 'Yeah, I will clean this up.' And, that for me started this mission to invent a structure that could actually clean this up, and now we recently announced we can indeed do so and in just five years' time." 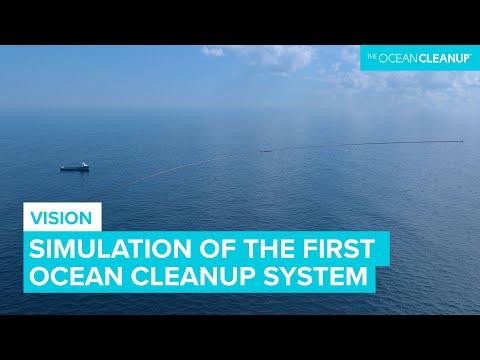 On how the collection systems would work

"At first it was, the world had a perception that it was sort of a solid mass of plastic, and in the past people proposed to clean this up with boats and nets, but the thing indeed is that it's very much dispersed. The plastic, it's not a solid mass, so doing so would cost many, many thousands of years and tens of billions of dollars to complete. So what I proposed was to, instead of going after the plastic, we let the plastic come to us. And over the past four years, our team has been developing a technology that uses very long floating screens, which are in a u-shape, and what we do is we, attached to this u-shaped boom, we have a suspended anchor, which is at a depth of about 1,500 to 2,000 feet. And what's the case is that the deeper you go in the ocean, the slower the current gets ... and by suspending this anchor in this deeper water layer, we are able to slow down the system enough so that the plastic moves faster than the system, hits these barriers and then gets concentrated.

"So, in a way we let the natural ocean currents do the hard work for us, and now we've been able to show that with a fleet of 50 or such systems, we should be able to clean up about half of this Great Pacific Garbage Patch in just the next five years.

"About once a month, a vessel visits each of these clean-up systems, almost like a garbage truck of the ocean, would bring the plastic back to shore where it would then be processed and recycled into new products that we would then sell, at a premium, of course, because we could sell it as being made out of ocean plastic. So there's this branding value to this material."

"With a fleet of 50 or such systems, we should be able to clean up about half of this Great Pacific Garbage Patch in just the next five years."

On concern that these systems would not be able to withstand nature's forces, and that we should rely on less risky ideas

"We are happy to acknowledge that, you know, it's a high-risk, high-reward project, and certainly it's not easy, but we're confident that with the right team — right now we have 65 scientists and engineers on staff, we work together with the best off-shore engineering in the world, here in the Netherlands, that we are able to make it work. And, of course, it's very much experimental right now, we're doing the tests, but through those tests we hope to get to something that will certainly work.

"But having said that, of course we also need to prevent more plastic from entering the oceans in the first place, but, that is not a substitute to cleaning up plastic from the deep sea because, once in those offshore accumulation zones, the plastic doesn't really go away by itself. With our expeditions, we have found plastics, really, dating back to the 1970s even ... It also gets more harmful over time. So, all of these large objects, they fragment down into these smaller and smaller pieces, becoming as small as that they would then be able to be consumed by fish and other wildlife, which is of course a very dangerous thing. So, by cleaning up what's already out there, we also, in a way, prevent the creation of these microplastics. Right now, just 3 percent of the plastic in the oceans is those small and hazardous microplastics, but this will of course become 100 percent, so it would multiply 30-fold if we wouldn't clean it up. So, I think we really need to do both: We need to both stop it at its source, and clean up what's already out there."

This article was originally published on May 30, 2017.