The challenge of getting children to read over the summer has long been an issue. So how do you make reading something kids want to do, instead of it feeling like summer homework?

Here & Now's Robin Young speaks with author Kwame Alexander (@kwamealexander) about his books "The Crossover" and "The Playbook," and inspiring children to read.

On surprising a young fan whose first read was "The Crossover"

"So I wrote this book called 'The Crossover,' and I was in Chapel Hill, North Carolina, doing a book signing for the new book, 'The Playbook.' And so after the signing, this woman comes up to me, and she says, 'Mr. Alexander, I have a letter for you. It's a letter from a 12-year-old boy who's in eighth grade.' And he's telling me how much he enjoyed reading 'The Crossover,' and how he had never read a book until he read mine. And it was a really touching letter — so touching that I decided I was gonna to show up at his school and surprise him. And when he came out of class, I just began to recite the poem..." 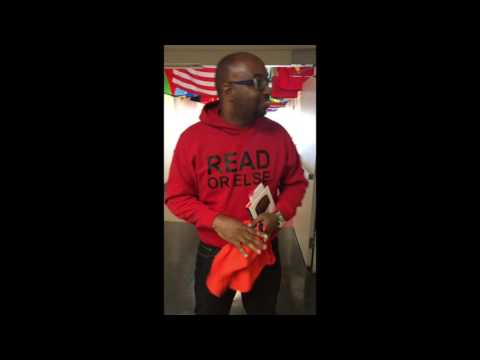 "It was like I was Lenny Kravitz or something. I was a rock star for that moment, and the kids were just electrified by the fact that the author of their favorite book was literally right in front of them... That's the best feeling in the world. Winning the awards, making a best-sellers list, are things that are life-changing for me. Seeing that kind of response, seeing the life-changing impact of words on a kid... That's the work, and that makes it all worth it."

On ways to get kids excited about reading

"I have an 8-year-old daughter, and I deal with that all the time. She wants to be on the iPad, or she wants to watch Netflix, and I get it. I like to think if you can find a book that offers entertainment and inspiration, I think that you can find a way to empower kids through those books. So I have this mantra that I believe: Books are like amusement parks, and sometimes you gotta let kids choose the rides. And so, we were on our way to Hawaii for vacation recently, and on the plane I had a copy of 'Out of the Dust' [by Karen Hesse], 'Roll of Thunder, Hear My Cry' [by Mildred D. Taylor] and 'March: Book Three' [by Andrew Aydin and John Lewis] for my daughter to read, and I was like, 'These are the books you gotta read. You need to read a chapter for every 15 minutes of screen time on this plane,' because it was a long flight. And she said, 'Well I wanna to read Raina Telgemeier's 'Ghosts,' and 'Smile,' and 'Sisters,' which are these amazing graphic novels. But my position was, 'You've read them 11 times. Now it's time to read something else.' And she said to me, 'You don't believe in the things you speak about. I thought you said books were amusement parks and sometimes you gotta let kids choose the rides,' and I was like, 'Oh no! She threw my words back on me!'

And I think — and she was right, of course. But here's the deal: You want kids to get excited and engage with books? Give them a book that they want to read. Give them a book that they think is gonna be awesome. Allow the literature to be a bridge to get them to appreciate all the books that you want. But it has to start with their imagination, their excitement, and I posit, that a great way to do that is through poetry."

"I have this mantra that I believe: Books are like amusement parks, and sometimes you gotta let kids choose the rides."

On what he was hoping to get across in "The Crossover"

"I was trying to talk about family, and friendship, and sibling rivalry, and jealousy and first love. Those were the things that mattered to me and my friends when we were growing up. And I posit that just because we don't see boys expressing themselves freely and willingly doesn't mean they're not thinking about this stuff. And so I want to write stories about those things that are inside of all of us, especially the boys, and of course, how am I gonna do it? Well, I gotta use a little bit of trickery, I guess. So I gotta frame the story in something else that I love that's authentic for boys in particular and kids in general, and that is sports: basketball, and tennis and soccer."

On a lesson for giving kids more confidence, as told in "The Playbook"

This article was originally published on June 28, 2017.