“Magic: The Gathering” turns 30 years old next year. As the world’s first trading card game, “Magic” continues to attract legions of fans and earned a whopping billion dollars last fiscal year. So as part of a long list of celebratory events and products, the company behind the game announced “Magic: The Gathering 30th Anniversary Edition,” 60 randomized reprints from the game’s first run in 1993, on sale in time for holidays.

“This price tag for this type of product just feels wrong,” says Ed Reagan, who runs “Magic: The Gathering” tournaments at Labyrinth Games and Puzzles in Washington DC. “They've gone a bridge too far.”

Reagan and the rest of the store staff are so opposed to the commemorative set, that they’ve decided to give it away. “As a premium store, we get a few copies of packs … and we don't think it's a product that we should be forcing people to pay that much money for. So we're going to give them out as prizes, and I hope other stores will do the same.”

Players are used to spending a pretty penny. A typical pack can cost upwards of $4 for 15 randomized cards. But in recent years, “Magic: The Gathering” has printed more special collectible products. “30th Anniversary Edition” is the latest, and most extreme, example.

Head Magic Designer Mark Rosewater didn’t answer a question directly about the pricing for the “30th Anniversary Edition” but says “‘Magic’ can be a very fun game and you can spend very little money on it.”

“But on the flip end,” Rosewater continued, “you can go track down and collect and stuff, and make your deck very exciting if you want. Investment is really left up to the player to let them invest as much as they want to invest.“

Company Wizards of the Coast did provide a statement on the new product: “As Magic: The Gathering celebrates 30 years as the premier trading card game, we’ve created a variety of experiences and products for fans to celebrate this milestone — from events like Magic 30 and MagicCon Philadelphia, to giving out nostalgic promos at prereleases and selling 30th Anniversary Edition. We believe 30th Anniversary Edition will be a highly collectible product that many players and fans will cherish and enjoy.”

But some fans are taking the company to task. “Accessibility is not the business plan,” says YouTuber Brian Lewis on his popular channel, “Tolarian Community College.” “Selling more and more expensive packs, with intentionally expensive cards is. That is the message that the ‘30th Anniversary Edition’ says to us.” 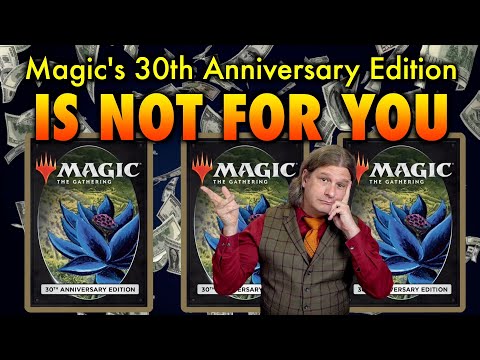 Players aren’t the only ones unhappy with the game’s trajectory. CNBC reported this week that Bank of America downgraded the stock of Wizard of the Coast’s owner, Hasbro — accusing it of “killing its golden goose.” “The primary concern is that Hasbro has been overproducing ‘Magic’ cards which has propped up Hasbro’s recent results but is destroying the long-term value of the brand,” wrote Bank of America analyst Jason Haas.

But while investors might worry about the health of this “billion-dollar brand,” many fans find community in playing it.

“The moments that always have me coming back are the friends that I get to spend the events with,” says former professional player Cedric Phillips. The game took him to tournaments all over the world, “I've been to Japan, I've been to Italy, Prague, Amsterdam, multiple places in Spain.”

Phillips now owns Coalesce Apparel & Design, a clothing company inspired by “Magic: The Gathering.” Even though he doesn’t play as much as he used to, he says the game’s ever-expanding scope (the company boasts over 25,000 unique card designs) keeps him coming back.

Many fans are also excited to see the game expand its diverse representation.

“A lot of the people that I play with are people of color and actually a lot of queer players as well,” says Tre Watson, a Black and nonbinary musician who composed a song for an official tie-in album. “We're always happy to see representation in characters, in the cards and everything.”

LGBTQ activist and artist Laya Monarez also saw “Ixalan,” a setting that came out five years ago, as a step in the right direction.

So while “Magic: The Gathering” has had its share of controversies over three decades, many players are still along for the ride. “It's gone through some ups and downs and some twists and turns,” says Cedric Phillips. “The game has grown to a degree that I don't think I ever really saw coming. It's immensely popular. It's still incredibly, incredibly fun. It feels like a new game every single time, which is great. And to me, it's just the best game in the world.”