The recreational marijuana law that takes effect Thursday does not propose any changes to existing penalties for driving under the influence. It's one area where State House leaders say they expect to add some requirements next year.

But deciding what to require may be difficult, because there’s no established way to tell when a driver is impaired by marijuana.

Unlike Alcohol, No Standard Chemical Test For Pot

To break it down, let’s start with what happens when police stop someone who appears to be under the influence. A patrol officer conducts a series of field sobriety tests and yes, suspects are still asked to walk a painted, pavement line.

If the suspect wobbles or the officer smells alcohol, the next step is a chemical test: the breathalyzer. Police can revoke the license of anyone who refuses. With the breathalyzer, there’s an established blood alcohol concentration level that signals impairment. In adults, it’s .08.

For marijuana, the field sobriety test would start the same way. But if a suspect is off-balance or the officer smells marijuana, there's no standard chemical test.

Brooks, who is also president of the Massachusetts Chiefs of Police Association, says he’s read about marijuana breathalyzer tests that are coming to market. But he questions whether they will be useful because there's no consensus about how much THC makes a driver dangerous.

"It’s not so much the machine that detects the THC, it’s the science and research that backs up what those results mean, and we don’t have that yet," Brooks said. 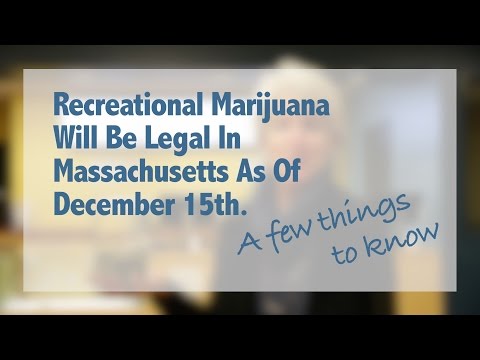 There are many reasons why chemical tests do not measure the effects of marijuana on things like brake and gas pedal coordination, distance perception and general attention. Marijuana may show up in urine, saliva or blood tests for weeks, long after the effects have worn off, because marijuana is stored in body fat. A regular and first-time user might have the same chemical test result but very different levels of impairment. And test results will vary based on whether you smoke or eat weed.

Dr. Igor Grant, chairman of the department of psychiatry at UC San Diego, says your blood count will peak within minutes of smoking, but then drop quickly as cannabis is absorbed into body tissue.

"At that point, you could have a relatively low level of THC in your blood, but the drug is still in your brain," Grant said. "So there could be a disconnect between the actual level of THC in the blood and how impaired you are."

Still, blood tests are part of legal marijuana laws in Colorado and Washington. Both states have a legal level of impairment — 5 nanograms of THC per milliliter of blood — that can be used to press charges. But limits based on blood tests are controversial. AAA, in a report released earlier this year, says the connection between blood concentration and impairment is arbitrary.

"The bottom line is, there is no .08 standard for marijuana as there is for alcohol," said Massachusetts spokesperson for AAA Northeast, Mary Maguire.

"We should move to a way of actually measuring impairment rather than measuring what’s in your blood or urine," Grant said. "Because at the end of the day, what counts is, are you actually impaired, not whether you’ve had exposure to something."

Dr. Grant's center is using driving simulators to study the connection between marijuana use and driving performance. He and other researchers say tablets seem to be a promising way to measure coordination and other skills marijuana may hinder.

In Massachusetts, police aim to test marijuana sobriety in 12 steps conducted by a specially trained drug recognition expert, or DRE. There are more than 100 DREs in Massachusetts, but most police departments don’t have one. So when a patrol officer suspects drug intoxication, a DRE meets the suspect at a police station.

The DRE exam, which takes about an hour, includes temperature, blood pressure, pulse and several eye exams. An office measures the size of a suspect's pupils and how they respond to darkness as well as bright light. There are balance tests. A suspect is asked to close their eyes, tilt their head back and look up after 30 seconds. Another test attempts to measure coordination -- asking a suspect to close their eyes and touch the tip of a finger to their nose.

"If you can’t touch the tip of your nose to your finger, you might not be able to slam on the brake and stop if someone came in front of you," said Officer Jason Callinan, a DRE with the Cambridge Police Department.

Suspects do not have to submit to the exam and unlike with alcohol, there's no penalty if they refuse. Callinan says the Legislature could change that.

If a suspect takes the DRE exam voluntarily, Callinan compares the results to a DRE matrix of drug-related symptoms.

"It's almost like a big jigsaw puzzle," Callinan said.

He writes a report that will be available if the case goes to court. Sometimes it’s accepted as evidence, sometimes not.

"If you come in as a DRE, some judges don’t think the science is valid and the DRE evaluation will be excluded," Callinan said. "Some judges accept the program, and you’ll be able to testify."

Supporters of the DRE program are looking for a test case that might go to the Supreme Judicial Court and validate, or not, the evidence DREs collect.

In the meantime, police chiefs say they need more DREs. Sometimes the symptoms of drug impairment have worn off by the time a DRE from another city reaches the station holding a suspect. Many police chiefs in Massachusetts say they expect an increase in impaired drivers once marijuana is legal in Massachusetts. But it's not clear that will happen. There are studies that find more accidents involving marijuana after legalization and some research that shows no effect.

"They almost overestimate the impairment they have," Grant said. "That’s why they typical joke is: Well, a drunk driver is speeding around and a stoned driving in the slow lane at half the speed they should be driving."

DRE guidelines say users typically exhibit the effects of marijuana for two to five hours. Potency, the amount of weed used and the way it is ingested all affect the duration.

Proponents of the legal marijuana law in Massachusetts say the best thing the Legislature could do to curb impaired driving would be to require that police video tape the entire encounter — from the alleged erratic driving through the field sobriety test.

"If there's any challenge to the arrest, then show the video to the judge or jury and let them decide if the driver was impaired," said Dick Evans, an attorney in Northampton who chaired the Yes on 4 marijuana ballot question committee.

Brooks says most police in Massachusetts do not have so-called "dash cams" and equipping them would cost quite a bit of money.  It's not clear if this is one of the requirements the state Legislature is considering to address driving under the influence of marijuana.

It may be some time before there's agreement on how to hold accountable those who drive while high. But there is widespread agreement on one point now: If you're impaired, don't drive.

"Driving is the most dangerous thing that most of us do every day," Maguire, with AAA, said. "Our first responsibility is to ourselves, our passengers and everybody else on the roadway and when we drive impaired, we’re endangering everyone."

Correction: An earlier version of this story said the new marijuana law doesn't mention driving under the influence. The law mentions DUI, but doesn't offer changes. We regret the error.

This article was originally published on December 13, 2016.