CHESTER, Mass. – Come back, Frank Wedekind. If only we could channel you back into the soul of one Steven Sater, whom you guided to such wondrous heights in “Spring Awakening,” the musical adaptation of your 1891 work he wrote with Duncan Sheik. (It’s now appearing at Gloucester Stage Company.)

Sater and Sheik are on their own now, with “Arms On  Fire,” which is receiving its world premiere (through July 7) at the likable Chester Theatre Company on the border of the Pioneer Valley and the Berkshires. This story of a Honduran man’s relationship with a Latina bombshell many years ago and his current friendship with a nouveau jive-talking hipster is not a musical, but a play with music, again by Sheik. Maybe it should have been a musical because the play itself is jaw-droppingly bad, with clichés and ennui fighting each other pretty much to a draw.

Its two central characters, Ulysses (Guiesseppe Jones) and Smith (James Barry), make Vladimir and Estragon of “Waiting For Godot” look like action heroes, though existential angst is not what the play’s concerned with. Smith, the hipster, is a young singer who stumbles across Ulyssses, an older factory worker who used to be a DJ. Ulysses is haunted by the love of his life, Josephina, and looking at the woman who plays her, Natalie Mendoza, it’s hard to blame him. Mendoza is the only one of the three who comes out of this with her dignity fully in tact, but then she’s mostly singing in the background and doesn’t have to contend with the dialogue or Buddhist mumbo-jumbo to any extent. (Sheik’s music is a pleasant folk-jazz sensual mélange, helped to a great extent by Mendoza’s arms-on-fire delivery.)

Here's a preview from our friends at the Globe: 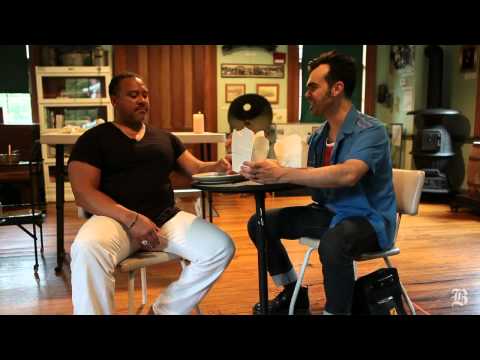 But even in Josephina’s case, Sater can’t rise above stereotype. Writers and directors have used Penelope Cruz, Salma Hayek, and Sofia Vergara to investigate and poke fun at the Latina bombshell and her place in contemporary sexual mores. Sater doesn’t do much more than chronicle Ulysses’ obsession with the femme fatale as he moves from stoicism to self-pity, recounting how he  chased her as she hitchhiked naked to the beach, put up with children there watching them make love, bristled as she offered them whiskey.

I wish she offered me whiskey. It’s obvious why she was always leaving Ulysses for other men – he’s a drip. He stands around stoically muttering “si” and other monosyllables to Smith’s psychotic rants, letting him walk all over him, too. And it doesn’t help that Jones delivers these “si’s” with less Hispanic affect than Queen Elizabeth. Either of them.

Barry has more luck with Smith, even though Sater saddles him with such moronic musings that he struggles for comedic footing throughout. “You can almost sympathize with the terrorists. I don’t mean sympathize sympathize but don’t you just want to bomb the [expletive] out of something.”

Oh, yes, I can think of something.

I don’t know that director Byam Stevens, who directed Sater’s “Plains of Ilion” to begin his tenure as Chester artistic director, could have helped much formalistically. He’s a talented director and the mutual loyalty he and Sater have for each other is admirable, though sometimes friends have to tell friends that their behavior needs modification. Or their plays a complete rewrite.

This program aired on June 29, 2013. The audio for this program is not available.