LENOX, Mass. – You can’t accuse Shakespeare & Company of playing it safe this year. Their two big Bard productions, “Love’s Labour’s Lost” and “Richard II” are hardly crowd pleasers, nor is Bertolt Brecht’s “Mother Courage.” Brecht does have Olympia Dukakis in the cast, which will no doubt draw audiences even if two of her previous appearances with the company, “The Lear Project” and last season’s “The Tempest” have been nothing short of terrible.

But I like what I see early in the season from S&C early in the summer, a pair of extremely entertaining productions, both “Love’s Labour’s” and Tom Stoppard’s translation of Gérald Sibleyras’s “Heroes.” Both feature the crack acting that is the company’s trademark, particularly among their veteran actors. (Both run through Sept. 1.)

The eminent critic Harold Bloom wrote “I take more unmixed pleasure from “Love’s Labour’s Lost” than from any other Shakespearean play … Shakespeare seems to seek the limits of his verbal resources, and discovers that there are none … Alas, I have never seen a production of this extravagant comedy that could begin to perform to its vocal magnificence.”

I don’t know if he’d find Shakespeare & Company’s an exception, but there’s vocal magnificence aplenty here, particularly by Jason Asprey as the King who makes his attending three musketeers take a vow of celibacy for three years, much to the dismay of Mark Bedard, equally impressive as the devil-may-care Berowne. They make all of Shakespeare’s poetry shine through and the comedic buffoons are also a joy to watch.

Here they are rehearsing: 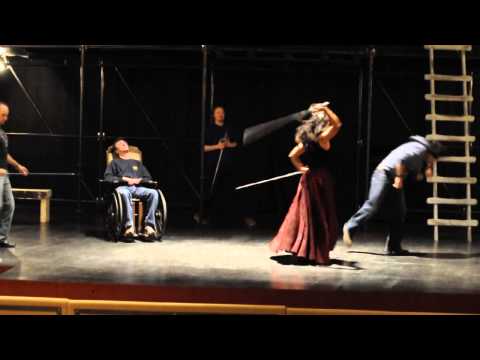 Director Lisa Wolpe, who makes excellent use of the Tina Packer Playhouse, has moved the action to the 1940s when women were starting to come into their own as decision makers. Unfortunately, the actresses don’t come into their own in the charisma department, which makes the four corresponding women seem merely mean-spirited and petty. Much of this is Shakespeare’s fault. Even Bloom would concede that these aren’t his most interesting characters and certainly not his most interesting females. Nevertheless, an earlier production by the company at the Mount had a cast in which the women and the men went at it, measure for measure. Paula Langton, though, is excellent as Holfofernes, the schoolmaster and ultimate MC. Wolpe uses ‘40s music superbly.

There aren’t any issues with the women in “Heroes” as there aren’t any. Jonathan Epstein, Malcolm Ingram and Robert Lohbauer are stuck on the terrace of a post-World War I convalescent home that will have many in the audience thinking of the assisted living and nursing homes of today. Can they attain anything of their past glory as their bodies and minds wither? Should they break out and rejoin the mainstream?

“Heroes,” though, is a comedy in which the authors channel their inner Becketts and all three actors prove they could do a pretty nifty “Waiting for Godot.” This one’s more accessible, though — it won the 2006 Olivier award as best new comedy. It’s hard to say where Sibleyras ends and Stoppard begins, but the latter’s love of language and absurdism — the statue of the dog is a major fourth character — is everywhere on display here.

Kevin Coleman is the director of the classy production. I’d rather see the company take on Stoppard’s own work, rather than his translations, particularly the plays that Boston theaters have shied away from — “The Invention of Love,” “Coast of Utopia.” This troupe has an obvious affinity for Stoppard, who keeps very good company with Shakespeare in Lenox.

Elsewhere in the Berkshires:

Barrington Stage Goes On The Town, And Behind Closed Doors

Chester: Arms On Fire Doesn’t Have Any Legs

Williamstown: What’s So Funny — And Dramatic — About The Sandwich?

This program aired on July 4, 2013. The audio for this program is not available.