“You think we're really brothers?” Lincoln asks his younger sibling, Booth, in Suzan-Lori Parks’ slightly disjointed, but potent and well-produced play, “Topdog/Underdog.” “I know we’re brothers,” Lincoln goes on to say, “but are we really brothers, you know, blood brothers or not, you and me, whatduhyathink?”

That’s the question that lurks with nasty inevitability at the heart of this often-uproarious but essentially mournful comedy, playing through April 9 at the Boston University Theatre in a production from the Huntington Theatre Company.

The show is a little episodic in nature, but directed with verve by none other than Tony-winning song and dance man Billy Porter (of “Kinky Boots” fame). The director is joined by a strong suite of designers. Leon Rothenberg oversees sound, Driscoll Otto orchestrates dynamic lighting and Clint Ramos furnishes both the costuming and another of the Huntington’s signature handsome set designs: a cutaway view of a box-shaped flat defined by tatty wallpaper and ramshackle windows, and girded by jaggedly upthrust shards that erupt from the ground like the very roots of the past to encircle the brothers and fence them in.

With the first glance it’s clear to the audience that these men are not given a level field on which to pursue their lives, mild as their aspirations might be. Should their lack of access and options eventually drive them to violence, will we be surprised?

There’s more than a hint of contemporary social commentary about this production of the 2002 Pulitzer Prize winner. Still, there’s another tale, old and mythic, beneath its trappings: that of Cain and Abel. But just who, in this telling, is destined to shed blood? In a story of small and large betrayals and mutual dependence, who will finally end up on top?

Lincoln (Tyrone Mitchell Henderson) is five years older, and that much more settled than his hot-headed younger brother, Booth (Matthew J. Harris). He’s slower in movement and speech, but he’s also a little more refined; he knows how to use chopsticks for Chinese takeout, whereas Booth resorts to a fork. Booth, however, is more animated — more of a player, so to speak, whether perfecting his nascent skills as a three-card monte hustler or unloading the fruits of a day spent shoplifting: two complete suits come off Booth’s dancing frame in a funny, felonious strip tease. Both brothers are charming, but Booth is the showman. He bears a striking resemblance to an old-time preacher at a lectern as he rehearses his three-card monte routine. You could easily imagine Booth doing tent revivals, or infomercials. 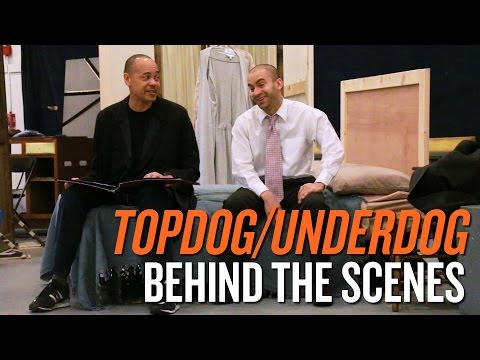 That doesn’t mean Lincoln is not the more capable con man. He is. In fact, he was once a supremely capable street hustler in his own right. But now he's made different choices, opting to set aside the wild ways of his youth and hew to the straight and narrow. He labors at a humiliating job as a human target at an arcade, earning less pay than a Caucasian in the same job would earn. Despite his focus on a life lived inside the law, though, the outlaw fires still burn deep inside Lincoln. When he dusts off his old skills, a ferocious and diabolical energy enters the room. Booth might have a preacher man’s raw ability to sell his audience, but Lincoln can perplex the eye, confound reason and make cards shift and shuffle with almost supernatural skill.

In naming the fraternal characters of this two-hander “Lincoln” and “Booth,” Parks isn’t simply gesturing at the knotty problems of “brotherhood” in the charitable religious sense — the sweet, but often hazy, idea that all people are equal, that we thrive when we join forces and look out for one another. That notion is here, of course, and Parks gives it stinging bite, but on a deeper and more abstract level the playwright is meditating on a central human conundrum. The brotherhood of man (for this is a male-centric play, devoted to the intricacies of male affection and rivalry) is eternally, fatally flawed by the human need to grapple and prevail.

From the start, Parks telegraphs her intention to include those tragic layers beneath the play’s comic hurly-burly. Upon his first entrance, Lincoln is not only dressed in the iconic stovepipe hat and greatcoat of his historic namesake, but he’s also wearing a fake beard and whiteface makeup. The double gibe here isn’t just racial in nature; it conjures the idea of ghosts, whether from the ranks of the dead or in the form of one’s own unresolved spiritual wounds.

Parks casts such a wide net over so many topics that the play incites more than it examines. The flipside, however, is there’s plenty of space for exploration and creativity, and both cast and director make full use of that leeway. Henderson and Harris have differing styles and distinct affects, but they mesh well. When they argue, when they play, and when they speak together in a tentative and mournful mood about the parents who abandoned them at an early age, they do seem like brothers — “really brothers,” as Lincoln puts it, and not just two people accidentally connected by parentage.

But it’s Porter’s direction that really puts a gloss on the show and amps up its voltage. Porter refuses to allow “Topdog/Underdog” to lapse into glumness or tedious bickering. The stage business seems, beat for beat, considered and choreographed; Porter lets his cast make their own choices, but he intentionally guides them through their paces. That directorial style doesn’t change an overall sense that the play consists of slightly mismatched pieces, but it charges those pieces with a kind of musicality. Each long, layered, and emotionally complex scene feels, sounds and looks just right in and of itself.