Three people were killed and nine others injured when a vehicle went careening through a crowd of people gathered for an auto auction at an indoor facility in Billerica Wednesday morning.

Middlesex District Attorney Marian Ryan said at a press conference that a worker at the Lynnway Auto Auction was behind the wheel of a 2006 Jeep Grand Cherokee when it suddenly accelerated.

"As this vehicle began to enter the building, following a pace behind the car in front of it, it suddenly accelerated, traveled through the inside of the building at a very high rate of speed, striking numerous people and ultimately was brought to a halt by crashing into a cinder block wall at the far end," Ryan said.

Ryan said there were several hundred people in the building at the time of the crash. She said the vehicle traveled the entire length of the warehouse, which she estimated was about the size of a football field.

Authorities said two of the victims were female and one was male, though they did not provide their names or ages. Of the nine people injured, Ryan said two had life-threatening injuries.

Ryan said the driver was in his 70s and was not injured. She said the investigation into the cause of the crash was ongoing. 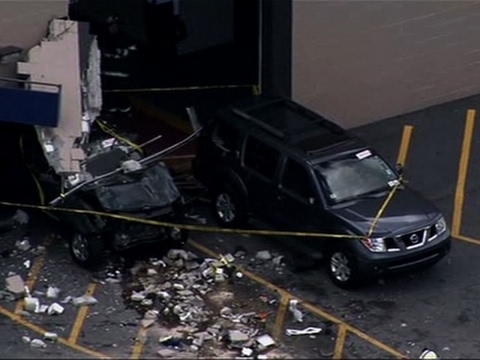 "The preliminary information we have right now suggests that this is a tragic accident," Ryan said during the press conference.

Earlier Wednesday, Massachusetts State Police said there was no evidence the incident was intentional.

There have been several terrorist attacks around the world in recent months where suspects used vehicles as weapons.

This article was originally published on May 03, 2017.