Big Papi is adding to his list of impressive accolades — this time though, it's off the baseball field and from academia.

Boston University announced Thursday that it will give an honorary Doctor of Humane Letters degree to former Red Sox slugger David Ortiz at the school's 144th undergraduate commencement this year.

The announcement comes days after Ortiz was awarded his first honorary doctorate on Sunday from the New England Institute of Technology, a private college in East Greenwich and Warwick, Rhode Island. Ortiz delivered the school's 76th commencement address at the Dunkin' Donuts Center in Providence. 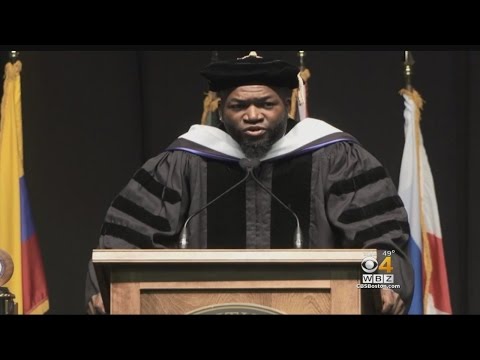 The 41-year-old retired last year after a 20-year career in Major League Baseball — 14 of which he spent with the Red Sox delighting a devoted fan base that continues to hold him up as not only a sports legend, but also, a Boston icon.

Ortiz gains this distinction along with this year's commencement speaker, NBCUniversal Chair Bonnie Hammer. The university will also present honorary degrees to Nobel Prize winner Mario J. Molina and longtime BU trustee and overseer Robert A. Knox, according to a statement from the university.

In addition to Ortiz's numerous baseball accolades, the statement from the university also notes his charitable work, including the David Ortiz Children's Fund, which aims to increase access to pediatric health care for children in New England and in his native Dominican Republic.