A taxi jumped a curb near Logan Airport Monday, sending 10 fellow cabbies to area hospitals. Police said the crash does not appear to be intentional.

State police spokesman David Procopio said in a statement the incident happened at about 1:40 p.m. near Logan's "cab pool" area in East Boston.

Boston EMS said 10 patients were transported to area hospitals. State police said all of the victims appeared to be cab drivers, and one victim was in serious condition.

The driver of the taxi remained on scene, and state police said he was being "cooperative." He has been identified only as a 56-year-old Cambridge man.

Procopio said the cause of the crash is under investigation. He added in his statement: "At this preliminary point in the investigation, there is no information that suggests the crash was intentional."

A police official who spoke with The Associated Press said the crash is believed to be a case of "operator error" in which the driver stepped on the gas pedal instead of the brake.

Video of the scene showed a white cab with front-end damage at rest against a building and near some picnic tables. The vehicle was surrounded by debris.

The incident Monday follows recent attacks around the world, including in London, in which vehicles were deliberately driven into groups of people. 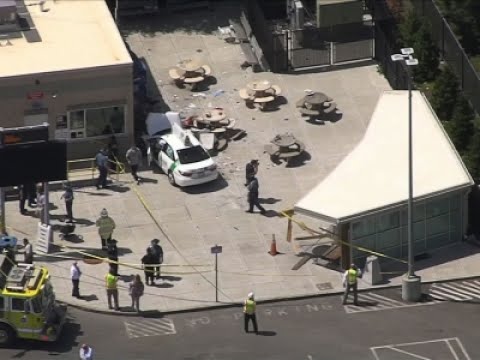 With reporting by The Associated Press

This article was originally published on July 03, 2017.