You know you’re in for a novel ride when an opera singer belts out, "Help me with this stih-ih-ih-ih-ing-king corpse!"

Those lyrics are in a new opera, known by the mouthful of a name, "The Nefarious, Immoral, But Highly Profitable Enterprise of Mr. Burke & Mr. Hare." It's premiering with the Boston Lyric Opera from Wednesday, Nov. 8, through Sunday, Nov. 12. As you could probably surmise from its title, the piece is dark, but also playful.

"Burke & Hare," created by two of contemporary opera's most prolific craftsmen, unearths a real, early 19th century murder spree. William Burke and William Hare killed more than a dozen people and sold their corpses to a surgeons' school in Scotland during a local cadaver shortage.

The opera’s set is fashioned after an anatomical theater, with the audience sitting in a circle around the action on stage, just like in the real medical schools that once filled Edinburgh’s Surgeons' Square in the early 1800s.

Designer Caleb Wertenbaker gives us a breakdown of the unique staging of "Burke & Hare" (for the best experience, use your desktop's cursor to move around the set or check this out in the YouTube app): 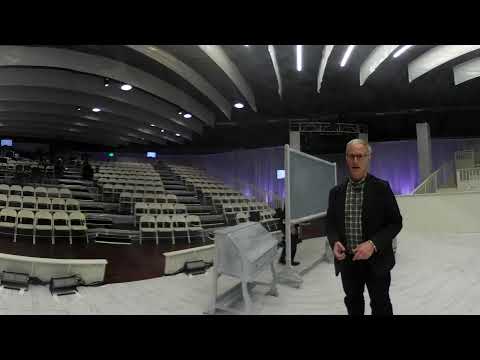 "Edinburgh was celebrated for its surgeons' schools, and there were all these edicts about how you could get 'teaching aids' — that means dead bodies," said composer Julian Grant, taking a break from a recent rehearsal.

Grant went on to explain that grave-robbing was illegal, “so there are these two ne'er-do-wells whose wives have a boarding house. One of their lodgers dies in his sleep before paying the rent. So they hit upon this marvelous idea of delivering the body to the surgeons' school. And of course they can't believe their luck when they get paid an astronomical amount of money for a dead body.”

The duo targets disenfranchised people from the poor end of town, Grant said, who are the sort of people nobody would miss — "they are dispensable. And then of course they get careless and the bodies start to pile up a little too thick and a little too fast."

When asked why he thought illicit body trade from the 19th century would make good fodder for an opera, librettist Mark Campbell replied, “We need a good story, we need characters that we want to follow.”

They found them in Burke, Hare and the cadaver-purchasing surgeon Dr. Knox — but also in the victims.

“The story is narrated from five of the victim's viewpoints,” Campbell said. “And that just carries us along. It also establishes an element of theatricality in the narration.”

Near the end of the opera those five victims — Donald, Abigail, Daft Jamie, Mary and Madge — rise and sing:

My corpse made more money than my live body ever did.

"What drew us to this topic I think was the desperation of the characters," Grant mused, "mixed with the kind of everyday humor of coping with a stream of cadavers and dead bodies and also with poverty and injustice.”

These are not exactly humorous topics, but for Grant and Campbell, dark comedy was key. There have been other tellings of this story — a few movies and poet Dylan Thomas wrote a screenplay about them that was never produced.

“I think if we had just made a documentary of these events it would’ve been pretty damn dull," said Campbell, who has written a number of operas about real events and people — including Steve Jobs.

The music adds to the effect, with an old-timey, standup piano, a police whistle and a metal spring in the chamber orchestra’s percussion parts.

“There is quite a lot of music for bass clarinet and double bassoon, it's even lower than a bassoon, and kind of poops away on the bottom register," Grant said. "So there's quite a lot of grotesquerie, I suppose.”

Cast member David McFerrin describes the opera as “macabre amusement.” He sings the high baritone part of the complicit surgeon’s assistant, Dr. Ferguson. For the BLO vocalist, the new opera’s dramatic and comedic powers are heightened by the fact that the plot is based on real, tragic events — including the sensational trial, public execution and dissection of Burke for the crimes.

“It’s a horrendous story, it’s a story of serial killers,” McFerrin said at a rehearsal. “So perhaps the removal of time softens that a bit. But I think the opera brings out — within the comedy — the horror of it. And the way that it’s being told through the eyes of the victims. These are real people.”

Like a lot of kids in the U.K., the composer grew up with this story (it's even been immortalized in a nursery rhyme). He hopes the new opera and its cast of characters raise moral questions about who gets to place value on human life.

At the same time, he says, “It's very difficult to sort of say that Burke and Hare are the baddies, and the doctor and his assistant are the goodies. They're not. They all seem to be deeply, deeply flawed and they've all got something to hide."

Now audiences can re-live the historical characters' dilemmas while laughing, perhaps uncomfortably, which is exactly what the creators behind "Burke & Hare" are after.