Pregnancy is a profoundly life-changing, exciting, emotional experience for a lot of women. But the idea of bringing a baby into the world can also be really scary, especially for mothers-to-be struggling with homelessness, abuse and drug addiction.

Now some of them are finding solace through a unique program, called the Lullaby Project, which helps them write songs to their children before they’re even born.

Caitlin Gillespie remembers exactly what she was doing when she got the big news.

“I found out I was pregnant when I got arrested,” she recalled candidly. That was about a year and half ago.

The then-32-year-old was stealing to support her decade-long drug habit. It started her junior year of college with opiates and pills. Then Gillespie moved on to what would become her drug of choice: heroin.

Gillespie overdosed six times. She tried to quit, but couldn’t. Gillespie and her boyfriend were homeless for two years, living under the Zakim Bridge in Boston when they learned she was three months along. She recalled how her mind raced as she sat in the South Bay Correctional Facility.

“How was I going to do this?” Gillespie asked herself. “You know, I'm in jail. I have nothing. I have no one. I mean, my family had pretty much stopped talking to me.”

There was something inside that made her feel like having a family could change everything. “But at the same time, you know, [there was] fear of the unknown and not knowing what was going to happen,” she shared. “So it was a really difficult thing for me to get through.”

Gillespie’s fears made it hard to connect with the baby growing inside her. Then her social worker told her about a novel project at Boston Medical Center, where Gillespie went for her prenatal care. It matches struggling pregnant women and new mothers with musicians to help them write and sing lullabies to their babies.

Hesitant thoughts like those are common, according to violist Elizabeth Moore.

Moore is a member of the local, musician-led ensemble Palaver Strings, which introduced the national Lullaby Project to the hospital. She and her colleague Kiyoshi Hayashi gently guided Gillespie through the process.

First, they asked her to write a simple, honest letter to her daughter, Harper Rose.

“She had written a part in the letter about imagining Harper's first words and first steps,” Moore said, “and the whole first verse ended up being based around that idea. And it turns out Caitlin loves to sing and is a complete natural.”

Here's the first verse and chorus:

Baby steps and your first words
I’ll be there for you by your side
To comfort you, sing lullabies
Rock to you to sleep when you cry.

Gillespie says she had one main point that she wanted to get across to her daughter.

“Any choices she made — whatever she chooses to do in life — that I would be there, no matter what,” she said.

And that shaped the second verse:

Pink tutus and ballet shoes
Hockey sticks -- whatever you choose
I’ll hold your hand as you grow
I’m here for you, won’t let you go

The musicians have been recording the lullabies they’ve shepherded -- eight so far -- with help from a grant through the local nonprofit The Record Co. and local writer, producer and engineer Matthew Brady. That way the moms-to-be and their families can listen back to their songs while they’re pregnant.

Here's a few other songs recorded with the Lullaby Project:

Moisès Fernández Via, founding director of the Boston University Medical Campus' Arts Lab and a concert pianist, told me he remembers all of the lullabies. He thinks that when the women hear what they’ve created it helps them get in touch with a part of themselves that perhaps they’ve lost in the process of trying to overcome their obstacles.

“In some ways, I think it touches them because they have to admit that they never thought that it would be possible, or that they forgot that side,” he said.

The Arts Lab, a collaboration between Boston University’s School of Fine Arts and the medical campus including Boston Medical Center, programs a variety of therapeutic programs that support patients and staff through music. For the Lullaby Project, Fernández Via, social workers and nurses identify women who would benefit most from the process.

He recalled when Gillespie sang her lullaby for the first time in front of the group and a silence fell over the room.

“And it was a silence of just acknowledging that something true has happened. We just have tasted someone's heart, and someone has just offered that to us,” he remembered. “It just so powerful, and so brave. I just think these moms are heroes.”

For a lot of the moms, Fernández Via says just showing up is herculean. Public transportation, money issues and childcare can be insurmountable. He also gives credit to the 14 young Palaver musicians for giving their time to the program. He calls them “a group of young people, young musicians that are not so busy and worried about promoting just themselves.”

The name Palaver is inspired by the phrase “palaver hut,” which in Liberia is a location for conversation and conflict resolution. Early on, the ensemble performed concerts for the Liberian Education Fund, and have expanded their support of other social causes including aging issues for LGBT senior citizens through their Life Songs project and immigration issues.

Palaver Strings and Gillespie have performed her lullaby in front of live audiences many times. Here in Boston, in Maine and also at Carnegie Hall where the growing Lullaby Project originated at the Weill Music Institute.

More than 60 mothers, ages 16-44, have written personal lullabies there. A study commissioned by the institute shows the diverse cross-section of participating women reported feeling more connected to their babies, partners and families because of the experience.

Gillespie confirmed the Lullaby Project definitely helped her bond with her baby.

“Especially when I sang it, and then heard it played back, and every time that I would play it for someone it became more real,” she said. “And then I think even more so once I had her, and played that song, and remembered those feelings that I had before I wrote the song and how different I felt when she was actually there.”

Now Harper Rose is 10 months old and looks like the young girl character Boo in the animated film “Monsters Inc.” Sitting in Fernández Via’s office at BMC, Gillespie asked her baby if she wanted to sing with her. Harper Rose belted out a “nah, nah, nah.”

Gillespie told me her daughter is giving her a reason to stay clean.

You could hear the sentiment in the song:

“For anyone with addiction, like, it's not the drugs,” she said, “we choose the drugs because there's something missing.”

These days Gillespie, Harper Rose and Harper’s dad live together in temporary housing. The new mom recently got a job waiting tables and she’s training to be a yoga teacher.

Have a listen to Gillespie's song: 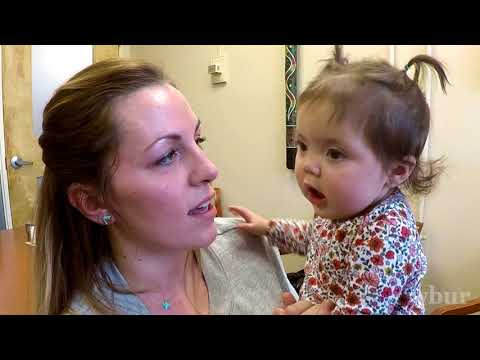