There’s a moment deep in “Hype Man: a break beat play” in which a white rapper struggles to understand why the people of color with whom he works insist that their experience of the world is fundamentally different from his own.

After all, they all shared the some upbringing, didn’t they? “Same public schools, same bus,” he insists. “[D]rank the same water, raised on the same welfare.”

But one of his musical partners notes the key distinction: “You can walk outta here and never think about race again,” she tells him.

And there’s the rub, for anyone born into the dominant role in an unequal social power dynamic. White people talking about race, men talking about sexism … we — and I do occupy both categories — can make our best effort to understand what it’s like for someone on the other end of a system that is built to enforce inequality. But it’s always an exercise in empathy, not of shared experience. I can try to understand the predicament intellectually but I’ll never actually feel what it’s like. And so I’ll never fully understand.

This disconnect is at the heart of Idris Goodwin’s play, which is seen in a riveting world premiere by Company One Theatre at the Boston Center for the Arts through Feb. 24. The tightly drawn, stylishly realized one-act takes a close look at a hip-hop trio whose chance for a big break is threatened when one member pushes his partners to take a public stand in response to the latest police shooting of an unarmed black youth.

The group’s leader, that aforementioned white rapper, resists the move, complaining that the life story of the deceased young man is “not my experience.” Questions of race, gender, privilege, cultural examination and creative freedom are picked up and tossed around adroitly as they threaten to blow up this union of friends and musicians.

Michael Knowlton is Pinnacle, a white emcee who grew up among African-Americans but remains an outsider working with a historically black art form. Kadahj Bennett is Verb, his longtime friend and the titular hype man — the person in a hip-hop crew who works the crowd and interacts closely with the rapper as a supporting vocalist. Rachel Cognata is Peep One, the crew’s relative newcomer, who crafts the beats and produces their tracks.

Verb’s act of defiance — wearing a T-shirt that calls for justice for the slain youth, echoing the “I Can’t Breathe” T-shirts worn by several NBA players last season in response to the suffocation of Eric Garner by police choke hold — seems relatively tame, particularly in light of Kendrick Lamar’s very pointed references to police shootings in his performance to open this year's Grammy Awards broadcast.

But the price the group pays in “Hype Man,” including calls to boycott their shows and local police refusing to work security details at them, directly recalls the real-world response by various police groups to Beyoncé’s performance at the Super Bowl two years ago and then to NFL teams whose players have taken a knee during the national anthem to protest police brutality and racial injustice.

These actors do excellent work here, fully embodying their characters. Bennett finds surprising humor, Knowlton vividly evokes Pinnacle’s confusion and inner conflict and Cognata becomes an audience favorite, speaking up for all the women who struggle to get their musical voices heard in the testosterone-fueled world of hip-hop. Goodwin has a great ear for vernacular, and the three actors dance through the script’s internal rhythms with deft naturalism. Under Shawn LaCount’s precisely timed direction, they move organically from intense verbal confrontations to smoldering silences and back again.

The whole show crackles with energy and feels propelled by beats, but what can’t be overstated is the importance of its musical interludes. While Goodwin, who has recorded a series of hip-hop albums, wrote the lyrics for the show’s several raps — performed convincingly onstage — the actual music is unique to this production. Bennett, who doubles as music director and performs locally with the group Dancelujah, crafted the attractive beats himself during a workshop process last fall. The songs are available on Bandcamp, and Company One even worked with local producers HipStory to create a video for one song. 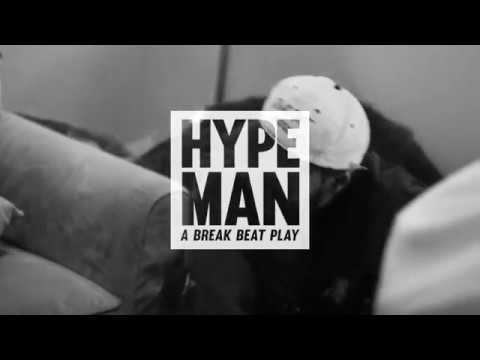 Something “Hype Man” gets right, where other overtly politically minded plays often go wrong, is that its action is rooted in the engrossing relationships among its three characters. Yes, Goodwin sets the story firmly against questions about social responsibility in the face of injustice. But the piece only rarely feels didactic. Even in exchanges that perhaps too-neatly summarize social theory familiar to folks who have investigated these issues, these characters’ words feel born from their own experiences rather than pulled from a syllabus.

“Hype Man” feels both urgent and, in its topical material, sadly familiar. Its beats and its messages will leave you nodding your head, reminded that in the combustible combination of poetry and politics, a single spark can illuminate.

Company One's “Hype Man: a break beat play” is at the Boston Center for the Arts through Feb. 24.