Ayanna Pressley has yet to make inroads into Rep. Michael Capuano's lead in the race for the Massachusetts 7th Congressional District.

That's the finding of a new WBUR poll (topline results, crosstabs) of registered voters likely to vote in the Democratic primary there.

"We saw a very similar margin when we polled this race back in February to what we see today," said Steve Koczela, president of the MassINC Polling Group, which conducted the survey for WBUR.

Back in February, Capuano had a 12-point lead.

"We're also still seeing the dynamic where Ayanna Pressley is running about even or even perhaps slightly ahead in Boston, where Michael Capuano polls such strong support in surrounding communities that that's enough to give him a solid edge in the race," Koczela said.

But Koczela said Pressley could still mount a successful challenge to Capuano if more young and nonwhite voters turn out at the polls.

"What typically happens in primaries is they're pretty low-turnout affairs," he said, "and we see that although this district is majority-minority, in the past the majority of voters who have turned out for primaries have been white and they tend to skew much older."

Pressley leads among voters under 45.

"I think she's more representative [of] a change compared to what I've heard about the other candidate," said Aliza Stern, 41, of Boston.

Forty percent of voters polled say they would prefer a candidate who has been around awhile, with experience in how Congress works. Forty percent say they prefer someone new to Congress with fresh ideas and perspectives.

"I hope that the same way I'm planning on going out to vote that more people, really, instead of just complaining about the way politics are, that they actually make a difference and get out there and vote because I think unfortunately we're in a rough situation now, and if we don't vote to make a change for who is in office it's going to be a real problem for our country," Stern said.

When she says she wants to see change, Stern says she means not just in the White House eventually, but also in Congress now.

The district encompasses parts of Boston, Cambridge and Milton, and all of Chelsea, Everett, Randolph and Somerville.

Pressley also leads among nonwhite voters. Among African-Americans, she leads by 23 points.

"I think that we need to be proactive and throw caution to the wind and vote in some new blood," said Judith Scott-Hammerquist, of Boston.

Pressley has argued that in her life experience as an African-American woman, she represents the voters of the district better. Most voters, 55 percent, say a candidate's gender should not be a consideration when deciding whom to support.

Capuano leads among both men and women.

"We need to be more inclusive and have a greater diversity in our congressional representation," said Scott-Hammerquist, a retired paralegal. "I like Mr. Capuano and I think he's done a somewhat decent job, but I think with the Trump administration, we're in for the fight of lives, and we need to get some new energy into the Democratic Party."

Both candidates are extremely well-liked. Sixty-five percent of voters hold a favorable view of Capuano.

Fifty percent of respondents hold a favorable view of Pressley, and she has room to win over more: 26 percent still have never heard of her.

"I think the difference is one of emphasis and not of content," Buermann said.

Forty-four percent say the candidates' positions are somewhat or very similar, with another 37 percent saying they don't know or refuse to answer.

Pressley is trying to distinguish herself from Capuano by proposing to abolish U.S. Immigration and Customs Enforcement. But that does not appear to be a popular position: Only 21 percent of registered voters surveyed say they want to abolish ICE.

A few other findings:

The live telephone poll surveyed 403 registered voters in the 7th district over the past weekend. It has a margin of error of 4.9 percentage points. 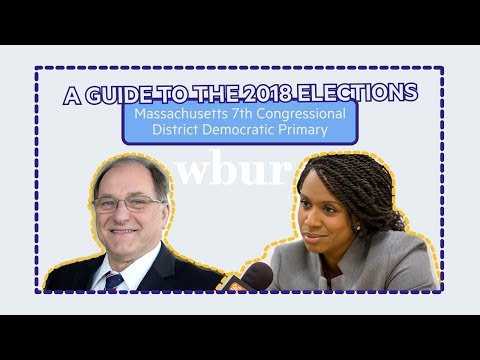