The conflicting red, white and blue signs that claim to speak for Massachusetts nurses are everywhere: "Nurses say NO on 1" and "Nurses say YES on 1."

So which is right? Well, it turns out they both are.

A WBUR poll of 500 registered nurses shows 48 percent plan to vote for the ballot question that would establish nurse-to-patient ratios in state law, and 45 percent say they'll vote against the measure. Seven percent are undecided.

"Nurses are split on the question," says pollster Steve Koczela, president of the MassINC Polling Group, which conducted the survey (topline results, crosstabs) for WBUR.

Why the split? Koczela says the answer is in the range of experiences among nurses in Massachusetts.

"Nurses who say they're going to vote no are more likely to be very satisfied with their job, they’re less likely to say they feel overloaded or have too many patients, and they're less likely to have seen negative consequences as a result of high staffing ratios," Koczela says. "On the yes side it's pretty much the opposite."

Take Kelly, a nurse at a teaching hospital south of Boston. Kelly, like most of the nurses we spoke to who are voting yes, asks that we just use her first name because she fears retaliation from hospital administrators who are urging nurses to vote no.

There’s no consensus among nurses, though, about how many is enough. Forty-one percent of those surveyed say all or most of the six nurse-to-patient ratios spelled out in the ballot question are appropriate, from 1-to-1 in intensive care to six patients per nurse after a birth with no complications. But 38 percent of nurses don’t agree with many or any of the proposed ratios, and 20 percent don't know or declined to say.

There's also disagreement about whether the state would have enough nurses to make the law work. Many hospitals already assign nurses at the proposed patient ratios, on average, but the ballot question says hospitals have to maintain those ratios at all times. A state report estimates Massachusetts would need as many as 3,101 additional nurses to cover the required ratios.

Fifty-six percent of nurses say the state doesn't have that capacity.

It might mean hiring from nursing homes, home care programs, or "they’re going to have to pull nurses away from mental health beds, and the state is short on mental health beds already," says Caitlin Hamel, who works in an ICU northwest of Boston. Hamel says the ballot measure is not realistic because the ratios would take effect on Jan. 1, giving hospitals less than two months to staff up. She's a no vote.

About half of nurses surveyed say if the ballot question passes and overall health costs rise, hospitals are likely to close units or close altogether.

"If this law passes, this could be multiple $10 million impacts to our operating budget," says Michael Gaudreau, an RN who manages two units at North Shore Medical Center. "So I’m fearful of closure of our hospital and other community hospitals." Gaudreau plans to vote no as well.

Some nurses on the yes side call the closure talk a scare tactic.

Ann, an ER nurse from Taunton, says hospitals will be better off with ratios because fewer nurses will burn out and leave. Ann, who is also worried about employer retribution, is voting yes. She says her hospital has the money for more nurses; they spend it on overtime shifts daily.

"I work at least eight hours overtime a week," Ann says, "and I get a text almost every day about short staffing."

If the question is approved and costs do increase with mandatory ratios, 71 percent of nurses say it’s very or somewhat likely that hospitals will pass the expense along to insurers, which means premiums will rise.

"You know, trickle down," says Jennifer Carr-Loveland, who works in a cardiac unit at Massachusetts General Hospital. "It will have to come from there, there’s no other way to pay for the costs."

Carr-Loveland says a state report that estimates costs would increase as much as $949 million a year caught her attention.

"It's quite a bit of money," Carr-Loveland says with a shaking laugh.

Thirty-eight percent of nurses say they think that nearly $1 billion estimate is too high. Others say some additional spending might be worthwhile. Half of nurses say mandatory ratios would improve patient safety, 19 percent say it would get worse, and 29 percent expect a mixed outcome or no change. 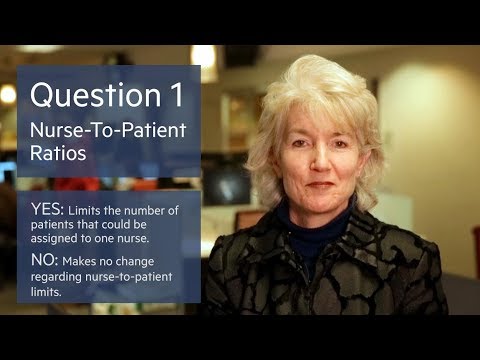 One in four nurses say they've seen a patient harmed during a time when a nurse was assigned too many.

Heidi Unger-Dowd, a nurse with almost 40 years of experience, will vote yes, remembering the times she feels she's let patients down.

"I’m not going to say that someone has died or anything, I don’t have that personal experience," she says, "but I do have the experience of patients and family members getting very angry with you because they feel like they’re not getting their due time from you."

Unger-Dowd works at Brigham and Women’s Hospital, where she’s a member of the Massachusetts Nurses Association, the union spearheading the Yes campaign. Among union nurses, support for the ballot question rises to 60 percent, with 33 percent opposed.

The split among nurses on the ballot measure mirrors a divide among the state's voters seen in several recent polls.

That's frustrating for nurses who’ve been lobbying to set patient ratios for more than two decades at the State House and now through the ballot question. While only 15 percent of nurses say a ballot question is the best way to establish nurse staffing rules, many nurses say the vote will feel like a referendum on their work.

"I’m really upset about it, I’m ready to cry, it’s just so upsetting," says Kerri, a nurse who joined Kelly, the nurse from earlier, at a coffee shop after work. "I just feel like we’re at a loss and we’re kind of defeated."

Kerri is another yes voter who worries her hospital will retaliate. She already feels attacked on social media for liking a post in support of Question 1. This ballot question, it seems, is dividing nurses on and off the job, as well as in polls.

"It’s so sad that something that — although it might not be the best way to do it — was created to try to protect nurses and protect patients is so divisive among the people it was meant to protect," Kelly says.

It will be a while, she adds, before things calm down, regardless of what voters decide about nurse-to-patient ratios on Nov. 6.