One of the hottest tickets on Broadway this season is Network, the stage adaptation of the 1976 movie about a news anchor who cracks up on the air and the executives who exploit his ravings for ratings.

Ivo Van Hove is directing the stage show. He says he first saw Network in a Belgian movie theater when he was a young man. "My memory of it is that it felt like science fiction," he says. "Something which was impossible, which could never ever happen. When I read the script, now a few years ago, I thought well, this is the world that we live in today. So this was also the challenge, of course, how to make this work that was a little bit of a parody in its time — how to turn it into a tragedy." 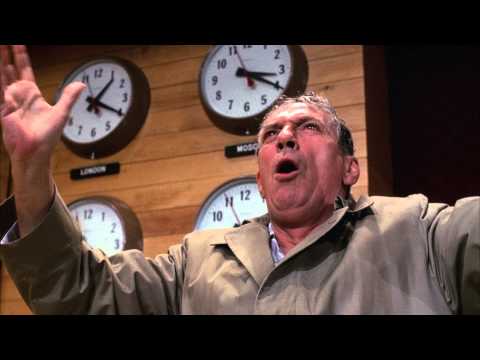 In Network's climax, anchor Howard Beale hears a voice ordering him to go on the air and tell his audience the truth. In his pajamas, he rushes into the newsroom and on to the set to share his epiphany, and in the film, actor Peter Finch starts right in with his revelations: "I don't have to tell you things are bad," he yells. "Everybody knows things are bad. It's a depression. Everybody's out of work. Or scared of losing their job ..."

But here, the play differs from the film. Actor Bryan Cranston — as Beale — rushes into the TV studio, then spends seemingly endless silent minutes grasping for words. Cranston says it's "like the experience of waking up from a vivid dream, and we think 'oh, this is indelible!' And you start to try to recall it, and it dissipates, like fog. And so he collapses from that. And out of that despair and public humiliation comes the speech." Cranston actually wells up with tears when he finally speaks.

In both the screen and stage versions, Beale's rants touch a nerve with his television audience and his ratings spike. The network executives seize the opportunity to build an entertainment program around his newscast: The anchor becomes a celebrity, and infotainment is born. Keep in mind, screenwriter Paddy Chayefsky predicted this more than 40 years ago, and it won him an Oscar.

In his dressing room before a recent matinee, Cranston said Chayefsky's prescience was frightening. "One of the speeches, if you recall, was 'Only three percent of you people read books. Only 15 percent read newspapers." The numbers were likely never that bad — but according to the most recent study, roughly half of all Americans still prefer to watch the news on TV, with the Internet not far behind. "Remember Howard Beale also says, 'Don't look to us for the truth, because we just tell you what you want to hear,'" Cranston says.

Director Van Hove says that in the stage adaptation of Network, the medium has become the message. As the action cuts between characters, the dialogue is recorded by actors with cameras, and broadcast live across huge screens that wrap around the set. One scene is even shot outside the theater, and follows a conversation between two actors on 44th Street as they walk into the building and onto the stage.

Van Hove says he wanted to make the audience feel the intensity of being in the middle of a live TV show. "If you have been in a live TV show, it's always a pressure cooker," he says. "There's a countdown, and it's 7 o'clock, it has to start. You cannot wait. You cannot say 'Stop, I'm not ready. Let's do it again.' No, there's no doing it again. You do it once and it's over. And that thrill I wanted to give. And at the same time, another thing became for me important, that there would be cameras everywhere. It's as if the world became a television studio."

The play began at London's National Theater in 2017. Cranston says its message resonates on both sides of the Atlantic. "The idea of anger driving policy. Of fear and demagoguery as a real motivation for change, whether you view it as good or bad, i.e. Brexit, or Donald Trump becoming president. There's tremendous upheaval going on."

He says that over the course of Network's trans-Atlantic run, he's learned the value of expressing anger. "You think that, 'What is that going to solve?' But in truth it does. It releases the pressure valve. Somewhat. On some people just a little. On others maybe a lot. There's intrinsic value to that. To the human condition."