93-year-old Steven Nowicki skied the Thunderbolt when he was a kid. Now he waits, perched on a walker-chair at the front of the Thunderbolt Ski Museum, a recently installed exhibit in the shadow of Mt. Greylock.

"I give them everything," Nowicki says. "My boots, my skis, everything. They’ve got everything here."

Visitors can touch the seal skins Nowicki and his friends attached to the bottoms of their skies to climb the mountain, and they can feel the dull edges on the thick wooden skis they used to come back down. A mannequin in the corner wears Nowicki's favorite sweater. Long before his body became stooped and frail, someone snapped a picture of him wearing it.

"Oh yeah, that was my favorite," he says with a smile.

In the fall of 1934, the Civilian Conservation Corps cut the Thunderbolt Ski Run into the eastern face of Mt. Greylock, the highest peak in Massachusetts. The Class A racing trail was soon attracting city dwellers by the thousands to the town of Adams.

"That's when the trains used to run here," Nowicki remembers. "Then the farmers would come with the sleighs and the horses and bring them up there. Oh yeah, there’d be thousands of people. Every race, yep."

The Thunderbolt also attracted championship skiers — Olympians from places like Harvard and Yale and the Dartmouth outdoors club. The speed records from that era still stand. "Pretty well gone now," Nowicki says of the men against whom he skied. "I’m beating them all."

The championship skiers of the Thunderbolt might have been forgotten if not for high school biology teacher, amateur documentarian, and history buff, Blair Mahar.

"It's nice to always remember where you came from as you're trudging into the future," Mahar says.

Many of Adams young ski champions served in the 10th Mountain Division during World War II. Steven Nowicki had always wanted to fly, so he piloted B-24 Liberators.

But Mahar says, it wasn't World War II that spelled the end of the races on the Thunderbolt. It was a force far less menacing.

In 1936, the world's first chairlifts were installed at Sun Valley in Idaho. Before long, ski resorts from Tahoe to the Alps offered an easier way to get to the top.

When you ski the Thunderbolt, it’s like going back in time. ... No ski patrol. No lights. No groomed trails. No safety net, you’re on the mountain and that’s it.

"So, you know, nobody wanted to walk up a mountain when you could ride up the mountain," Mahar says.

Of the four New England Class A trails cut by the CCC in the 1930s, the Thunderbolt is the only one that never became part of a major ski area. A proposal to build a tramway to the summit was defeated in 1941. Developers got as far as pouring the concrete footings for chairlift terminals in the '70s, but over the decades, all attempts to develop the Thunderbolt failed.

"When you ski the Thunderbolt, it’s like going back in time," Mahar says. "You hike up, you take your run. No ski patrol. No lights. No groomed trails. No safety net. You’re on the mountain and that’s it."

The last major championship on the Thunderbolt was held in 1948. Nearly 60 years later, Mahar produced a documentary called "Purple Mountain Majesty." By then, locals and backcountry enthusiasts were schussing down a trail overgrown by brambles and sticker bushes. The movie reminded the people of Adams of the town's great skiing history. And it made them sad to see the course in such disrepair. As the 75th anniversary of the first championship race on the Thunderbolt approached, locals decided to do something about it.

"The trail had grown in, wasn’t really anybody doing anything much," Mahar says. "And then we began cutting it and kind of reclaiming it and, yeah, reclaiming that race."

Blair Mahar and his friends didn't just bring back the Thunderbolt. They brought back the races. So, on a bright, sunny Saturday that seems much warmer than its 10-degree forecast, Steven Nowicki has come to the base of the trail to send off a new generation of ski racers on the 80th Anniversary Thunderbolt Ski Race.

Many of the 100 racers are wearing brightly colored spandex suits. Their skis and snowboards are designed with the latest technology. A small white drone hovers overhead, ready to take video of the mass start.

It's an oddly modern scene for a bunch of racers getting ready to step back in time.

Today's race is being run randonee style — also called ski mountaineering, skimo, and rando. Racers start at the bottom and are timed on both the uphill and the downhill. Today's course loops the Thunderbolt twice.

The sport is big in Europe, but most American ski resorts frown on the practice. 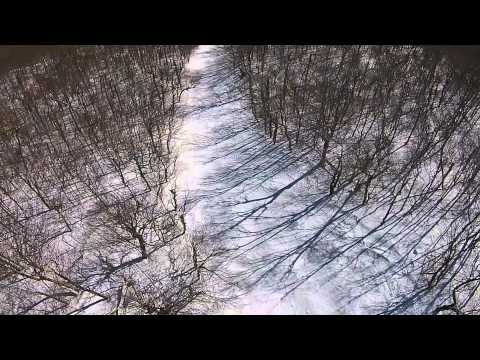 After about an hour, racers start arriving at the summit in twos and threes. They rip off their climbing skins (made of nylon and mohair, not seal) and shove them inside their racing suits. Before they can even catch their breath, it's time to head back down.

"Some people are sick of, you know, standing in the lift line, freezing their butt off on a ski lift when you can stay as warm as you want on the way up and hopefully go ski some nice, soft snow," Jeremy Arnold, this year's champion, says after the race.

It took Arnold 55 minutes to climb the nearly two-mile trail and about six minutes to ski back down. In Steven Nowicki's day, racers weren't timed on their way up. They rested at the top and raced down one by one. Nowicki's best finish was just over three minutes.

At Mt. Greylock, skiing up is the way it's always been.

"You have a lot or respect for people who came before you, you know, and pioneered it on big wooden skis," racer Bob Yates says. "This is cheating compared to what those guys were on. They were the real deal. We’re just running around in bright nylon, you know?"

After the race, skiers and locals gather for Thunderfest — an event inspired by the return of racing to Adams. There's even a local brewery pouring pints of Thunderbolt IPA. Steven Nowicki uses his walker to navigate a large patch of ice in front of the stage. He hands medals to the top finishers. The crowd cheers like he's a rock star.

After four decades of relative obscurity, the Thunderbolt is once again bringing visitors to Adams. Not by the thousands, at least not yet. But the annual event is growing.

Mt. Greylock is a state reservation, and the Thunderbolt is now protected from development. The people of Adams say that's just the way they like it.