This story is part of Only A Game's special episode about the past, present and future of the NCAA. Find the full episode here.

The news broke on a Tuesday morning, a little less than two weeks ago. It started with a few tweets. The details were broadcast through the rest of the day.

"The FBI is charging 10 people with fraud and corruption ..."

"The picture painted by the charges brought today is not a pretty one ... "

"It could be one of the biggest scandals we’ve ever seen in sports. ... It’s a game changer."

College coaches were accused of taking bribes to funnel players to particular agents and financial advisers. Players’ families were also being paid. Adidas was involved.

But what’s really interesting about how this story unfolded, is that almost immediately after the news broke, people said, "Hey, we shouldn’t be surprised about this totally unprecedented FBI investigation."

Sports commentators started pointing a finger at "the system."

"We all know this system is corrupt. Every one of us knows it," WFAN New York's Mike Francesa said.

Pretty soon, people were talking about the very thing that the NCAA calls the "bedrock foundation" of college sports.

"If there's going to be a death penalty, it needs to be to amateurism," Fox Sports' Jason Whitlock said. "Give amateurism the death penalty, then you have a chance at creating a system free of a lot of this corruption."

The college sports industry brings in about $10 billion in annual revenue, mostly through football and men’s basketball. What do college athletes get? Scholarships — that can be yanked after a year — and maybe, if they can balance academics with their jobs as athletes, an opportunity to get an education.

The college sports world can be divided into the haves and have-nots. The top revenue-earning schools come from what are called the Power Five conferences, which boast the best college football teams. The school’s get the bulk of their sports revenue from TV deals, sponsorships and donations. And they spend a lot of that money on skyrocketing coaches’ salaries and multi-million athletic facilities. Meanwhile, the least profitable schools come from conferences comprised of historically black colleges and universities.

And there’s something else going on here, and it’s important. Because in the two sports that bring in virtually all of that money — big time college football and men’s basketball — more than half the players are black. And studies suggest whether you’re black or white affects how you see this issue.

Because the majority of whites support the amateur model. They don’t want to see players get paid.

And the majority of blacks oppose it. They think players should get a bigger piece of that $10 billion dollars. And anyone who tells you that amateur sports aren't about money hasn’t been paying attention. Look at how sports commentators describe college athletes:

"You get a good player at 12 and you know what he is? He’s a property. He’s money," Francesa says.

Players not getting paid while everyone around them profits. It’s how the NCAA’s always done it.

But when you’re watching the big game on TV, and you see the color of most of the players out there, some say it sends a message. And the message is ...

Blackistone's been thinking about amateurism and black athletes a lot. He makes a strong argument that this is an issue that disproportionately affects black families. Not only that, but Blackistone says, the NCAA ...

"Sets it up as a sort of plantation system, where you have workers who work the crops — crops that bring in all the revenue to the overseers. It may be a strong commentary, but I think it's an apt comparison."

Where Does The Money Go?

You might ask, where does all that money go?

Well, if you’re a Clemson fan, you probably have a pretty good idea. 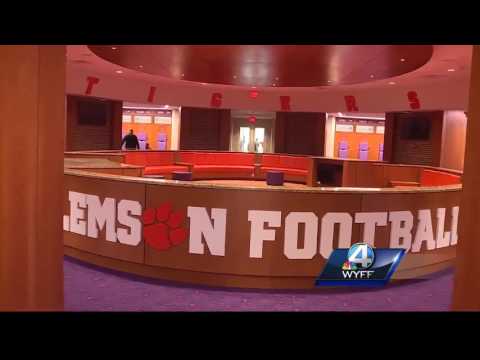 It’s also part of the arms race in college sports.

And so is this: Dabo Swinney, Clemson’s head football coach, makes more than $7 million a year.

Schwarz has spent the last couple decades looking at how college sports operate.

To keep winning and bringing in revenue from TV deals, branding, ticket sales and donations, you’ve got to get the best players.

"When someone’s in the living room with a recruit and they’re trying to sell them on School A versus School B, the normal way you would do it is, 'We’re going to pay you more,'" Schwarz explains.

Still, there’s more money left over and that’s where corruption comes in.

According to the FBI, there were two different schemes involved in the latest NCAA scandal. One involved bribery. The other has been classified as fraud.

With the bribery, assistant coaches were allegedly paid up to $100,000 to push players toward corrupt and unqualified money managers and advisers.

With the fraud scheme, Adidas funneled money to young players and their families in exchange for commitments to schools sponsored by Adidas, which hoped they'd have a long relationship with the company.

It makes sense for federal prosecutors to go after the assistant coaches for bribery. But with the fraud scheme, if it wasn’t for the NCAA’s strict commitment to amateurism, Adidas could have paid players and their families on the up and up, assuming the recipients declared the income.

Check out more from Only A Game's episode on the NCAA here.