This is Part 3 in our episode on the origin of the forward pass.

Everybody knows Notre Dame made the forward pass famous, right? That moment was re-created in a 1940 movie, "Knute Rockne, All American." 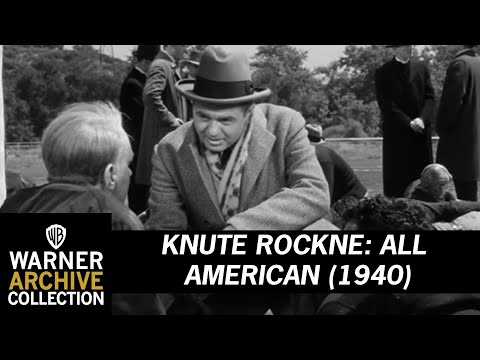 On the autumn day in 1913 chronicled in the film, Knute Rockne begs his coach to give the forward pass a try.

"Coach, let us use the forward pass. I know it will work," Rockne, played by Pat O'Brien, says.

"I'm not so sure. We've never seen it in the game," his coach replies.

"Neither has the Army. What can we lose?"

"All right. It's your idea, Rock. If you think you can put it over, go ahead."

The camera pans to the crowd.

Certainly rousing. But not entirely accurate.

"I just can’t believe that people are going, 'Oh, my god! Notre Dame won by throwing the football,' " says Kent Stephens, curator at the College Football Hall of Fame.

Stephens acknowledges that nobody builds up its own mythology like Notre Dame. His explanation for the popularity of the forward pass is more nuanced.

"There’s gradual changes, opposed to this overnight sensation that changes everybody’s opinion on everything," he explains.

OK, gradual changes. But a case can be made that if you want to pin a medal on somebody for popularizing the forward pass, you might choose Benny Friedman.

Friedman was born in Ohio in 1905, a year before the forward pass became legal. For years it was rarely employed. According to Murray Greenberg, who has researched the life of Benny Friedman, one reason for that was the ball itself.

"It looks a lot like a rugby ball — more round than the slender, oval, spheroid ball that we’re used to seeing today," Greenberg says. "They couldn’t grip it properly. It was almost shot-putted down the field."

Well, sure it was, except when it came time for Benny Friedman to get his hand on that big, round ball. Friedman’s family was from Russia. He was an Orthodox Jew, and he was determined to shatter the stereotype of the Jewish man as pale non-athlete. He took up competitive bodybuilding. He succeeded like a champ. In every photo, he looks terrific.

Among the muscles he strengthened were the ones in his hands. To do that, he developed various exercises.

"He would lift chairs from the bottom of a chair leg and flip them," Greenberg says. "He would spread his fingers out on the corner of a table and press as wide as he could to increase his grip size and strengthen his grip."

By the time he reached high school, Benny Friedman was throwing a football more accurately and with more confidence than passers who’d preceded him. He led his high school team to the Cleveland city championship.

'Why Wait 'Til Third Down To Pass?'

When it came time to choose a college, he picked one of the places where football would eventually matter a lot.

"And he really took over the Michigan football program by storm," Greenberg says. "He wasn’t concerned about passing on first or second down, like everybody else. He knew he could do it. He used to say, 'Why wait 'til third down to pass? That’s when everybody’s expecting you to do it.' "

Benny Friedman awed no less an authority than Knute Rockne, who once claimed the passer could "hit a dime at 40 yards." Friedman made All-American twice and was named the Big Ten’s Player of the Year in 1926.

Going pro in those days was an iffy proposition. Friedman joined the Cleveland Bulldogs, which, in short order, became the Detroit Wolverines. In 1928, as a Wolverine, he led the NFL in touchdown passes. He had nine. Nobody else had more than five, so nine was enough to convince the owner of another team that Friedman was worth pursuing.

"Tim Mara’s New York Giants were struggling, big-time. Nobody was coming to games. And he really needed something to stabilize his franchise," Greenberg says. "And he started thinking, 'This guy is so sensational, and on top of that, he’s Jewish. Imagine if I had this player, this Jewish player in New York City, what that would do for my team?' "

The problem was that the Wolverines knew what they had in Benny Friedman. They weren’t about to trade him to the Giants. So Mr. Mara did what he had to do.

"The only way he could see getting him was to actually buy the entire Detroit franchise," Greenberg says. "And he did."

The tactic was extreme. The payoff was immediate.

"Because people started coming to the games. They started coming to see Benny Friedman play," Greenberg says. "The red ink that the Giants had been running for several years turned to black right after Benny’s first season."

No Hall Of Fame Lock

Throughout that first season and into the next two with the Giants, Friedman continued to make believers of coaches and fans who’d been dubious about the forward pass. He finished his career by playing three seasons for the NFL team in Brooklyn and retired as a player in 1934, after being named First Team All-Pro in four seasons.

So maybe he should have been a lock in 1963, when the Pro Football Hall of Fame inducted its first class, right? Because by 1963, everybody knew the forward pass was more fun than anything else in football, right? But quarterback Friedman was no lock.

"He was not," Greenberg says. "And year after year went by, and years rolled into years rolled into decades. And he just was not included in the Pro Football Hall of Fame, which was extremely important to him. I think there are some athletes who really, maybe don’t care that much about something like that, but Friedman was very, very proud of his ability, and he really, really wanted that honor."

Ironically, that pride — and the way Benny Friedman sometimes expressed it — may have had something to do with his exclusion from the Hall of Fame. He told people what he’d done and how significant he felt it had been, which some regarded as unseemly.

Decades later, he made enemies by blasting the players and owners who decided that men who’d retired from the league before 1958 shouldn’t be included in the pension plan. There has also been speculation that one of the qualities that made him so attractive to Giants owner Tim Mara, his Jewish heritage, accounted for the refusal of bigoted Hall of Fame voters to support him. Prejudice is sometimes hard to prove.

As a young man, Benny Friedman had been triumphant, handsome and successful, and revolutionary in terms of football.

Old age was not kind to him. He was not well in his retirement. Eventually diabetes and a blood clot led to the amputation of a leg and, at the age of 77, he’d had enough. After leaving a note that said he refused to be "the old man on the park bench," Benny Friedman shot himself in the head. That was in 1982.

And then in 2005, thanks in part to the efforts of some of the football players and others who knew him for his good work when he’d coached football and headed the athletics department at Brandeis University, Benny Friedman made it into the Pro Football Hall of Fame. He was inducted with fellow quarterbacks Steve Young and Dan Marino.

"And so you could say, it took him a long time and he never got to see it himself, but at least his bust rests in good company," Greenberg says. "I like to say that if Benny were here, given his, shall we say, 'confident nature,' he might say Steve Young's and Dan Marino’s busts are in good company, being next to his. But, you know what? He wouldn’t be entirely wrong."

Read more about the man who did so much to popularize the forward pass in Murray Greenberg's book, "Passing Game: Benny Friedman and the Transformation of Football."