On the eve of the 2018 Winter Olympics, let us look back at one of the most dramatic moments of the most recent Summer Games.

It transpired during the opening ceremonies in Rio’s most celebrated soccer stadium, the Maracana.

Because television wanted prime time for this prime-time event, the TV audiences in the U.S. weren’t going to see the parade of athletes until an hour after it had happened.

"We knew an hour in advance that Pita Taufatofua was about to take over the world in a very odd way," says Ben Cohen, who was in Rio covering the games for The Wall Street Journal.

Cohen was among the first U.S. citizens to see Pita enter the arena, wearing nothing above his waist but a glistening coat of coconut oil and a necklace made of sharks’ teeth. 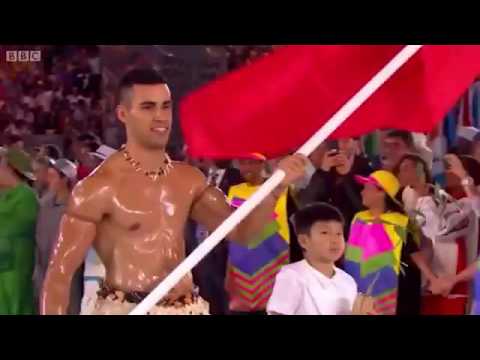 "And we sort of became obsessed with him ever since that night," Cohen says, "because it’s not every day you see an extremely shirtless, extremely oiled man holding a Tongan flag and becoming a global celebrity on one of the world’s most extraordinary sports stages."

For the next two weeks, Pita — a previously unknown taekwondo athlete — was a celebrity inside the Olympic Village and beyond.

Every time he walked through the Village, a runner, a jumper, a swimmer or a volleyball player would beg him to pose for a selfie. He was offered future opportunities to model, to act and to pose some more without a shirt.

But Pita was busy preparing for his second act in Rio: his opening round taekwondo match against a fighter from Iran.

"We thought that there might be some interest in him after the opening ceremony," says Joshua Robinson, who went along with Cohen to cover the match for The Wall Street Journal. "So we decided that we were going to own this story and just flood the zone. So we sent three people."

"They were chanting 'Tonga, Tonga,' " Robinson recalls, "and he was waving the Tongan flag."

Pita’s match lasted just six minutes. The loss eliminated him from the tournament.

But the story doesn’t end there.

Continuing His Olympic Story — In The Winter Games

I recently reached Pita on Skype, just after he’d checked into a tiny hotel room with really spotty Wi-Fi in Germany. Pita was traveling with a Chilean and a Mexican. Until a few months ago, the three had never met. The reasons for all this will soon become apparent, if not entirely rational.

Pita explained he was not particularly disappointed that he’d lost his only match in Rio.

"Absolutely not. I mean, 50 percent of everyone that fights in the taekwondo tournament loses their first match," he says. "It’s the nature of the game. And the guy was better than me on the day. And he deserved to win. I’m just happy that I fought my best."

And the chants of "Tonga, Tonga" that accompanied that country's only athlete at the Games as he became one of the few losing competitors ever to provide a crowd with a victory lap?

"That was a bigger win for me, because now people know where Tonga is," he says.

Or at least some people do. And in case you don’t, Tonga is an archipelago in the southern Pacific Ocean. Think Samoa, only further south. Which means there’s no snow there — which wouldn’t matter, except that Pita had such a good time at the 2016 Summer Olympics that he decided he couldn’t wait until 2020 to do it again. He wanted to compete in the upcoming Winter Games in South Korea.

So he turned down all those modeling and acting offers. And he figured the most difficult sport for a huge Tongan to master would be cross-country skiing. So, since a little over a year ago, that’s what he’s been trying to do.

"These are the worst things ever made," Pita says. "I tell you: the amount of concrete that I've eaten, no one should ever go through that process."

But Pita has gone through that process. And the process has moved him a little closer to his goal of competing at the Winter Games.

"After the Sochi Games in 2014, the International Ski Federation decided, in an effort to expand its field to warm weather nations, it decided to allow points accrued in roller skiing events to count toward cross-country skiing," Cohen explains. "So it is possible to qualify for cross-country skiing at the Olympics by getting most of your points while on roller skis."

"That's like qualifying to play basketball in the Olympics by building up points playing shuffleboard," I say.

"I think you'll have to take your beef to the International Ski Federation, though."

And as it happens, over the past year or so, Pita has roller skied well enough so that all he needs is one vaguely decent result in a race on actual snow to make it to South Korea.

"To me, that's the Olympic spirit. It's not all about gold medals and just destroying each other. It's actually about bringing up each other."

Unhappily, his most recent attempt to achieve that result in Poland last weekend did not go well.

Maybe the ski broke off the boot because ... well, I’ll leave it to Pita to explain why his equipment isn’t perhaps Olympic quality.

"I've been racing on rental skis in all these races," he says. "And it turns out that the professionals have 30, 40 pairs of — one ski for soft snow, one ski for hard snow, and I've only got one ski. So I guess it makes the decision easier, which one to use."

Happily, Pita hasn’t been alone in his quest to get the last result he needs to qualify for the Winter Olympics. He’s been traveling to races across Europe and training with the aforementioned Mexican and Chilean. The latter actually has some experience in the sport. He skied in a sprint event at the 2014 Games in Sochi.

Robinson says the Tongan rookie has been trying to learn from the veteran.

"I saw him give the other two a lesson on how to wax skis properly," Robinson says. "And Yonathan, the Chilean, starts pulling out these little tubs of ski wax, telling Pita how much they cost, sometimes 40 or 50 bucks a pop. And he had 10 or 15 of them in his duffel bag, saying, 'Well, this one is for wet snow. This one is for dry snow. This one's for hard snow.' And Pita went very quiet because all he had was one pack of wax that he bought on eBay. And it was for snowboards."

Pita and his two mates call themselves "the exotics." They’ve pushed each other to train hard — sometimes as often as three times a day, including skiing after dark.

During those sessions they light the trails with the flashlights on their iPhones.

Pita maintains that they each bring different talents to the partnership.

It’s a grand and heartening vision, that is. But on a less spiritual plane, a gold medal would be welcome. Pita estimates that his quest has put him in a hole that’s $30,000 to $40,000 deep.

"I think I need to win the gold medal and sell it just to get back to zero," says Pita, who has been trying to raise some money for his quest through GoFundMe.

Pita has this weekend and the next to race well enough somewhere so that the International Ski Federation will OK his participation in the games. Success doesn’t seem likely, but maybe, as Pita has suggested, "success" as traditionally defined isn’t the whole point. Trying one’s best is part of the point, as is pursuing a goal about as unlikely as it could be.

Robinson feels Pita's adventure offers us a perspective too easily buried under the noise generated by the commercial spectacle of the Games.

"I think it's easy to be cynical about the Winter Olympics, and the Olympics in general, now," he says. "Fewer and fewer counties want to host them. There seems to be a constant hurricane of scandal, especially after Sochi with Russian doping. And when you look at Pita's story, there's nothing of that about it. He's trying to take an under-represented country to the Olympics because he enjoyed being there and because he felt he wanted to take on a new challenge. That's really what it should be about."

That, and whether — if Pita makes it to South Korea — he’ll wear a shirt during the opening ceremonies. I couldn’t help myself. I had to ask.

"Who knows? Anything could happen. It’s the Olympics," he says with a laugh.

For much more on Pita Taufatofua's quest to reach the Winter Olympics, check out Ben Cohen and Joshua Robinson's recent story for the Wall Street Journal: "Remember the Shirtless Tongan Flag-Bearer? He's Now a Cross-Country Skier."