Former Secretary of State Rex Tillerson delivered the commencement speech at the Virginia Military Institute Wednesday. In it, he urged graduates to "confront the crisis of ethics and integrity in our society and among our leaders in both the public and private sector." We'll listen to the remarks. 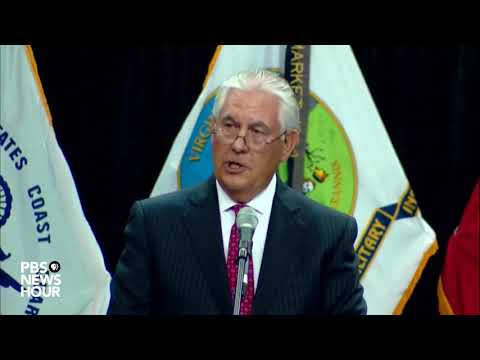 A government structure and a societal understanding that the freedom to seek the truth is the very essence of freedom itself. You shall know the truth and the truth shall make you free. It is only by a fierce defense of the truth and a common set of facts that we create the conditions for a democratic free society, comprised of richly diverse peoples that those free people can explore and find solutions to the very challenges confronting a complex society of free people.

If our leaders seek to conceal the truth or we as people become accepting of alternative realities that are no longer grounded in facts, then we as American citizens are on a pathway to relinquishing our freedom. This is the life of nondemocratic societies comprised of people who are not free to seek the truth. We know them well. Societies in Russia, China, Iran, North Korea. You can complete the list. A responsibility of every American citizen to each other is to preserve and protect our freedom by recognizing what truth is and is not. What a fact is and is not. And begin by holding ourselves accountable through truthfulness and demand our pursuit of America’s future be fact-based, not based on wishful thinking. Not hoped for outcomes made in shallow promises but with a clear-eyed view of the facts as they are and guided by the truth that will set us free to seek solutions to our most daunting challenges. This is also that foundational commitment to truth and facts that binds us to other like-minded democratic nations that we Americans will always deal with them from the same set of truths and facts. And it is truth that says to our adversaries we say what we mean and we mean what we say.

When we as people, a free people, go wobbly on the truth even on what may seem to be the most trivial of matters, we go wobbly on America. If we do not as Americans confront the crisis of ethics and integrity in our society and among our leaders in both public and private sector. And regrettably even at times in the nonprofit sector, then American democracy as we know it is entering its twilight years.

The Hill: "Tillerson warns military grads of 'growing crisis in ethics and integrity' " — "In a commencement address at the Virginia Military Institute in Lexington, Va., Tillerson said that Americans had a responsibility to confront leaders who mislead the public or promote 'realities that are no longer grounded in facts.'

"'If our leaders seek to conceal the truth or we as people become accepting of alternative realities that are no longer grounded in facts, then we as American citizens are on a pathway to relinquishing our freedom,' he said."