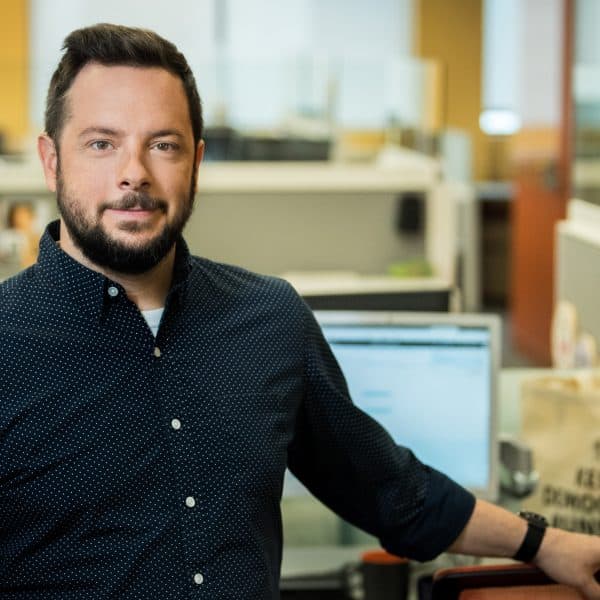 Ben Brock Johnson is the executive producer of podcasts at WBUR, where he helps direct strategic and editorial initiatives involving on-demand audio across the organization. Ben also co-hosts the podcast Endless Thread, serves as a tech correspondent for Here & Now, and is a guest host for WBUR programs including On Point.

Previously Ben was the host of the national daily program Marketplace Tech from American Public Media and Marketplace, reaching two million listeners around the country. At Marketplace, Ben also conceptualized and launched APM’s premier digital-first podcast, Codebreaker, in partnership with Business Insider. Codebreaker was hailed as the first completely bingeable podcast, pushing the envelope of the medium with embedded secret codes in each episode, requiring the listener to unlock subsequent episodes by cracking codes. Ben’s reporting was regularly heard on Marketplace with Kai Ryssdal, The Marketplace Morning Report with David Brancaccio, The BBC, and published in The New York Times

Before joining Marketplace, Ben worked at Slate, writing about culture and technology for the site’s Future Tense blog and Slate’s news blog The Slatest. He also managed an original content partnership between Slate and YouTube, directing the creation of daily news videos covering politics, technology, science, and culture, helping the company amass 35 million subscribers to its YouTube channel.

Ben previously worked for WNYC as a producer, reporter, and digital editor, both for The Takeaway and the WNYC newsroom. Ben brought some of the first reporting of Occupy Wall Street to New York Public Radio’s airwaves, spending the night in Zuccotti Park and following the protests and the movement through the fall of 2011. Before his career in radio, Ben worked as a print journalist, serving as a city desk editor, cops reporter, a music critic and features writer at the Staten Island Advance, Tribune Media Services, and The Day in New London, Connecticut.

Other important information: Ben worked as an undocumented worker selling bags in Florence, Italy, for a month when he ran out of money while traveling Europe; he lived in a yurt in his parents' backyard during high school, and his favorite method of entering a body of water is a pirate dive. His timeline has never been polluted by a subtweet, his best hat is made out of wool socks, and his secret to nachos he learned from his grandma: “cheese on EVERY chip.”