Subscribe to the Kind World podcast here - and send us a message to share your story of kindness.

Lauren Watson remembers what it felt like to be 19 years old. She can still see that energetic tomboy skateboarding and playing bass in an an all-boy band. And she remembers the day her best friend came over with his learner’s permit, excited to practice driving.

The two set out on winding roads in the Australian bush near where Lauren lived. They came to a turn, and Lauren’s friend accelerated instead of braking.

"We lost control of the car," Lauren says. "We were on a dirt road, and the car hit a tree. I had a lap seat belt, and I didn’t have enough support to hold me back into the seat. So my torso went all the way down and all the way back up again, and that’s what broke my back."

The break paralyzed Lauren below the chest. She was flown to Sydney by helicopter and spent eight months in the hospital. When she came out, her world had changed.

"I would go places and I’d be the only person in a wheelchair. People would either sort of ignore you, or sometimes they’d talk down to you. They don’t mean to; they don’t really know how to respond. You can feel just so separate."

Over time, she gained some patchy sensation and movement in her legs, but she was tired of the constant fight with her incomplete paraplegia. Hitting a plateau in physical therapy "would make me feel horrible about myself," Lauren says. At one point, depressed, she didn't leave her house for three months.

Twelve years after the crash, Lauren still felt isolated, but that was about to change.

She was shopping at a mall one day when she came across a girl suspended from the ceiling, entwined in a large metal hoop.

"She was spinning, doing the splits, hanging upside down."

It was a demonstration of aerial acrobatics.

"I’d never actually seen it before, and it was beautiful. And I thought, Wow. If I could do that, I could probably do anything."

Something switched on in Lauren in that mall. The challenge fueled her. She couldn’t walk, but she needed to soar.

Lauren went home and called every aerial acrobatics school she could find near where she lived in Queensland, Australia. Each time she revealed that she was in a wheelchair, the conversation came to an end.

Then the phone rang. It was Tammy Zarb, who owned a local school.

"Roll yourself in, and we’ll see what you’ve got," Tammy told Lauren. 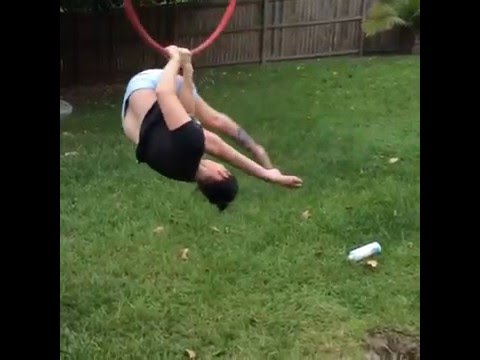 She was signing up for a challenge. The first step of aerial silk acrobatics -- climbing a fabric that hangs from the ceiling -- seemed impossible. After six months of struggling, Lauren tried gripping the silk with her thighs instead of her feet.

This video was taken nine months after Lauren had started training: 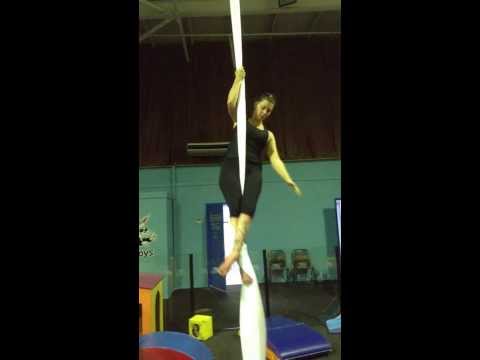 "The first time I did it, I just looked around and I’m like, people have to see this!" Lauren remembers. "People have to witness that I’m actually doing this!"

Tammy turned to see Lauren feet off the ground, dangling from the silk.

"Everybody in the room almost fell over. They were like, 'Oh my God, it’s Lauren, and she’s up there!' " 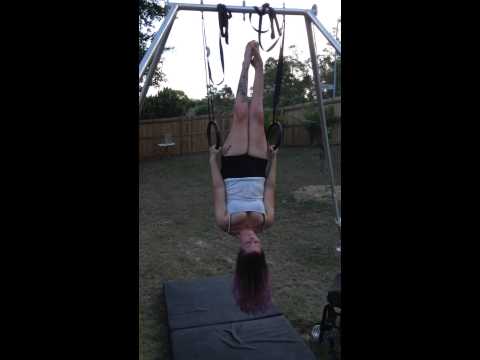 All this hoisting, spinning and stretching did something to Lauren outside the gym. She was in less pain and had more mobility, and when she needed to reach something on a high shelf, she found she could stand up long enough to grab it.

Tammy remembers one particular day, two years after she and Lauren had met. She looked over at the far end of her studio and saw Lauren practicing alone.

"It was almost like nobody could see her, just moving by herself. I think that was one of the most beautiful moments that I have seen. That’s when I thought, Yup, she’s definitely ready to perform and tell her side of the story."

Lauren started choreographing a solo for the school show, where she performed for the first time.

"It’s terrifying, but as soon as you get out there, it disappears. Your mind is clear for those couple of minutes. Like you’re daydreaming. Then everyone claps and you walk off and you feel amazing! Or you roll off. After that, I kind of haven't stopped."

"Lauren has a gifted way of making the audience forget that her legs don’t work, because you’re so taken in by it," explains Tammy, who says Lauren is on her way to becoming a professional aerial performer.

Lauren knows it was because of the kindness of one person.

"She just gave me the biggest opportunity of my life," Lauren says — because Tammy said yes, when others turned away.

We want to hear your stories of extraordinary kindness. Send Kind World a message, find us on Facebook or Twitter, or email kindworld@wbur.org.

You can subscribe to the podcast to make sure you don't miss an episode. This story includes music by Satellite Ensemble and Chris Zabriskie.