When we think about what makes us happy, we often focus on things or achievements, such as a getting a raise at work or having a nicer place to live. And indeed, getting what we want might improve our moods for awhile, but according to  Dr. Elizabeth Dunn, a social psychologist at the University of British Columbia,  the science suggests that being generous with others is a more effective way to feel joy.

“When we use our resources to benefit other people, we actually can end up being happier ourselves,” Dr. Dunn said. In a global study, Dr. Dunn and her colleagues found that people who give to charity tend to be a lot happier on average than people who don’t.

“In order to match the benefit to happiness of giving to charity,” Dr. Dunn said, “you would have to have about twice as much income.” This was true for participants in every income bracket.

But what if you don't necessarily get that warm glow from giving to charity? That doesn't mean there's something wrong with you. Instead, it might help to rethink the way you give.

Dr. Dunn spoke to Kind World about the benefits of giving and ways to view it a source of joy rather than an obligation.

(This interview has been edited and condensed for clarity)

On the Right and Wrong Ways to Give:

Elizabeth Dunn (ED): “Back in the day, in our evolutionary past, we were living in relatively small groups where everyone would have known each other. It would have been so vastly far removed from me entering my credit card into a website to help somebody on the other side of the world. So there is a bit of a disconnect between some of the giving opportunities that we face today and the kinds of helping behaviors that human beings evolved to enjoy."

"If we want to find joy in giving to others, then there's a few sort of key ingredients that really seem to make a difference in turning good deeds into good feelings. The first one is connection. We're more likely to experience joy from helping others if we really feel connected with the people or the cause that we're helping. Second one is impact. If we can see the difference that our good deeds are making, that seems to really unlock the emotional benefits of generosity. And finally, there's choice. The quickest way to strip the joy of giving away ... is to make people feel like they've been forced to give.” 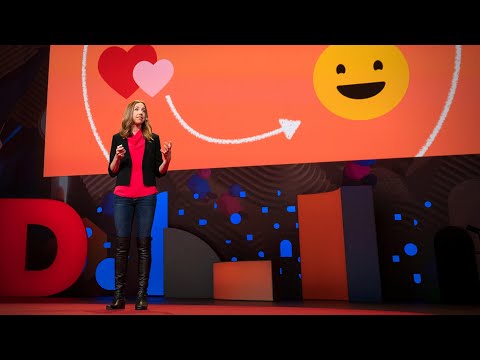 On Giving During the Pandemic And Other Crises:

ED: “With the economic downturn that seems to already be upon us, many of us are going to be facing tough decisions about what to give up. It's tempting to think, ‘Well, you know, I'm not doing as well now. I can't possibly help others.’ I think a really striking finding that we've come to from our work is that even when people are struggling to meet their own basic needs, they still derive joy from helping others. So don't give up on helping others just because the times are hard on you.”

“I think we're heading into a pretty challenging time. So it's just helpful to come back to this fundamental piece of knowledge, which is that we as humans have evolved to find joy in helping one another. And we can draw on that. We can get through this by doing our part to help each other. As hard as it's going to be, I think there's gonna be some amazing, joyful moments and some incredible feelings of connection that arise out of it.”

On How We Can Learn to Become Givers:

ED: “I think every time we sort of start to look out for ourselves, we can potentially ask, ‘Is there some way that I could use whatever I'm doing right now to help others as well?’ So, for example, I was actually at a conference just as the outbreak was beginning and I went to the drugstore to get hand sanitizer for myself, but I decided to buy about another 50 bottles. And I just gave it out to everybody for free, because I realized that this was just a small thing that I could do. It didn't cost that much. It wasn't that hard.”

On How To Think About Happiness:

ED: “The really wonderful thing about the human emotional system is that whatever happens to us, we get over it. So as bad as things might get, we will adapt to them. As terrible as we might feel initially about something, things get better. On the flip side, nothing makes us happy forever.”

“One thing we learned from happiness research is that you're never at the end of the journey. Nobody gets happy and just stays there permanently without continued effort and some challenges. Happiness isn't the destination you get to and stay forever. It's more of an ongoing journey that you have to think about at each fork in the road.”