Since about 1812 — the year when Old Ironsides, the USS Constitution, sank the British frigate the Guerriere off the coast of Nova Scotia in the War of 1812 — a textile plant in the central Massachusetts town of Webster has been churning out cloth. At one time it wove the fabric.

These days, instead of weaving, it prints various patterns on cloth woven in China. On Friday, Cranston Print Works, which has defied the odds for decades, will close. In so doing, it gives up the title of the oldest textile plant still operating in the country. 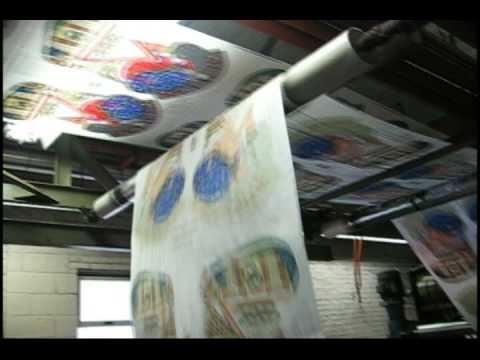 The plant, which still rolls out 20 million yards of printed cloth a year for people who sew at home, once employed more than 700 people. But as it follows other companies and shifts fabric-printing operations overseas, the 72 production workers remaining after decades of attrition will lose their jobs. Forty-five people will stay on in warehouse, distribution and administrative positions in Webster.

Generations of families worked at Cranston Print; there were courtships, marriages and babies. Among the workers is Francis Burke, who says the plant has been in his family's blood for seven decades.

"My father before me was superintendent of this print division," Burke says. "I've had uncles work here also, some of them have retired from here. So yes, it is in my blood, I guess you could say. And the company has supported me; my children have gotten scholarships to go to college from the company. In hindsight, it is part of my family. The majority of my life is spent here."

Burke has been here for 35 years. He closes out his career as a screen printer. With his ink-splotched hands and shirt, we speak on a catwalk aside a 60-foot-long machine printing designs on cloth. On this day, running over and under 11 furiously spinning rollers, is a floral Christmas design that will hit the stores in July.

After so many years at the plant, Burke thinks about fabric in a much different way than most of us. "If I see a woman walking down the street, or a man walking down the street, I’ll tell them, 'I printed that design you’re wearing,' he says. "And, you know, I’m proud of that. And I go into Wal-Mart and I walk through the sewing area, looking at cloth. I'm sure people wonder why I'm there."

Burke takes the shutdown stoically, saying he was ready for retirement anyway. But he says he feels sorry for some of the younger workers. "This industry does not have any openings. People have been trained in this business for years, and they're going to have to change their careers entirely," he says.

On another part of the production floor, we met Cranston Print Chairman and CEO George Schuster. Schuster says that as recently as the early 1990s, Cranston was the largest printer in the world, with not just the Webster plant but two others in Rhode Island and North Carolina. Most of their products were sold to the womens' apparel industry. "And then U.S. trade policy began to erode our industry, just like every other industry in America — a deliberate choice to move our manufacturing of America abroad," he says.

"I think that's a tragic error, but be that as it may, it happened. As that occurred and our market shrank, the remaining market was the home sewer. And we had to close first our Rhode Island plant in '96, then our North Carolina plant in '98. And this plant continued to service the home-sewing market. We held off as long as we could, but we finally had to reach that day when that business model of actually printing here, with the large fixed costs in America and our trade policy, finally caused us to close the plant."

Schuster isn't holding out much hope that a textile plant like Cranston Print might again flourish in the U.S. at some point in the future. "We'd never say never, but once a plant is hollowed out — a plant like this, with all the equipment and so forth — is sold off , the capital investment needed to bring it all back would be overwhelming, an obstacle probably too high to surmount," he says.

Cranston Print Works occupies a place in the industrial history of America. When the mill in Webster started in about 1812, it was owned by the Samuel Slater family, which nearby in Rhode Island built the first successful water-powered, cotton-spinning mill in North America. The Webster mill was powered by water coming out of Webster Lake.

Later, the plant was owned for a time by the Rockefeller family, and more recently printed millions of yards of camouflage fabric for the U.S. military during World War II. Cranston Print also has a genuine Paul Revere-made bell in its bell tower. The Revere bell, and some of the plant's history, will live on in a company museum in Rhode Island. But the history made by the thousands of people who made their lives here will likely fade, as the sound of the machinery fades out.

Paul Mario is one of those workers. He’s walked to work from his home nearby for over 33 years. "I started June 9, 1975," he says. "I know the exact date, it’s almost like your anniversary. And I bet you a lot of these people know the exact date they started, because — when you’re here 25, 30 years — it’s a long time."

Paul Mario operates what's called an aging machine, which runs newly printed cloth through a bath of acid steam, to both fix the color to the fabric and to bring out the color, which goes in rather dull and rolls out quite vivid.

Mario says he's been working the aging machine ever since it was put in 15 years ago. In fact, his ideas helped in the design of the machine. He acknowledges that, in a way, the machine is like something of a baby to him. "I’m gonna miss it. I know this machine inside and out, I really do. I’ll come back every now and again to visit it before they take it away anyway," he says, laughing.

Paul Mario is one of the Cranston Print workers offered a job in the company distribution center. So his short walking commute won’t change — neither will his commuting partner. Twenty-six years ago, along with cousins and an uncle, his sister worked for Cranston Print Works and introduced him to a another worker, who became his wife. She’s been here for 31 years.