Eighty-five-year-old Ruth Coleman sits in a wheelchair, immobilized by advanced Alzheimer’s disease. Her eyes are closed and her head is tilted back. Her daughter, Susan Coleman, holds her hand. Susan has asked Threshold Choir to visit the nursing home here, where her mother is slowly dying. Three women sing to Ruth.

"She’s much more quiet today," Susan says. "But so much of the time when (the choir members) come to sing to her, Mom will have been saying nothing, really not responding that much. And her eyes haven’t been open this morning yet and now they are opening. And sometimes she'll try to sing along. 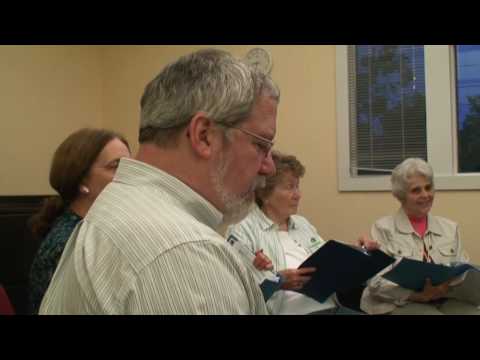 "It just really touches her on a level that most things don’t anymore. It’s wonderful."

As the singing continues, Ruth taps her foot — not in time to the music — but it’s the most movement she’s done all day, her daughter says.

The choir honors an ancient tradition of singing to people who are struggling. "We help to open a door to this person," says Peg Lorenz, who had been a hospice volunteer for more than a decade when she joined the choir.

"We help to kind of allow them the energy to move into the next phase of their existence, which is beyond death," Lorenz says.

Another singer is Pam Espinosa, who started the all-volunteer local choir three years ago after she was diagnosed with breast cancer and faced her own mortality.

"When I was thinking if I might die, how would I want to go out?" Espinosa asks. "I come from a very musical family so I can imagine being sung to by my family."

Espinosa started Threshold Choir at Indian Hill Music, a nonprofit music education and performance center here in Littleton, after reading about the first group in California. The hospice choir movement has blossomed in New England with groups in western Massachusetts and Vermont. The philosophy is that the singers don't perform, they share songs when invited by the family.

"This is a very precious time, for not only the patient, but for families, so it’s not appropriate to be there with a large group," Randazzo says.

To prepare for the intense experience, the choir rehearses with someone reclining in a lawn chair in the middle of the circle. On a recent night, they asked me to sit in the chair to see what it feels like.

Four women surrounded me in the chair and sang softly. I closed my eyes and felt like I was floating with the music. I experienced it in a way unlike anything I’d ever experienced, with the live voices so close to my ears. I felt the vibrations as much as I heard them.

The choir has a repertoire of original songs and hymns, but they’ve also sung artists requested by the family, such as Patsy Cline and The Beatles. During the recent visit to see Ruth Coleman, her daughter asked them to sing a song that brings her mother back to childhood, like "My Old Kentucky Home."

Susan sits close to her mother, stroking her hair. "People go back in Alzheimer’s," she says. "They go back someplace and that’s where she is. And so that’s the kind of time-frame for her, the country, Kentucky."

The choir has visited Ruth several times as her disease has progressed, but typically they are called to the bedside of a person only once.  Randazzo remembers one visit very well — on New Year's Eve.

"The family was planning to turn the machines off for their mom," she recalls.

The dying woman was in the intensive care unit, surrounded by her husband, children, clergy and the choir. There were tears, smiles and an intense connection, Randazzo says.

This story originally aired on June 8. It re-aired Dec. 28.