Considering that there is no store called “Elephants-R-Us,” where can a zoo find toys for the biggest, smartest and most playful animals in their care? For the Buttonwood Park Zoo in New Bedford, the answer has come from an unlikely place — the world of art.

The partnership was on display a few weeks ago when an army of tattooed, pierced and creative students from the Massachusetts College of Art and Design rolled out their one-of-a-kind, handmade educational toys for elephants: jumbo versions of a rainstick, popsicle, hackysack and more.

The students had been brainstorming and building for months, but the idea for the collaboration started two years ago when videographer Christen Goguen and I, Vicki Croke, first visited Ruth and Emily, the two Asian elephants at New Bedford's tiny zoo.

In the course of writing a book about elephants in World War II, I'd learned a lot of elephant facts, but I wanted to get to know real elephants. Buttonwood Park Zoo's director, Dr. William Langbauer, or Dr. Bill, as he is known, is one of the world’s leading elephant experts. And he introduced me to the elephants affectionately known as “the girls.” 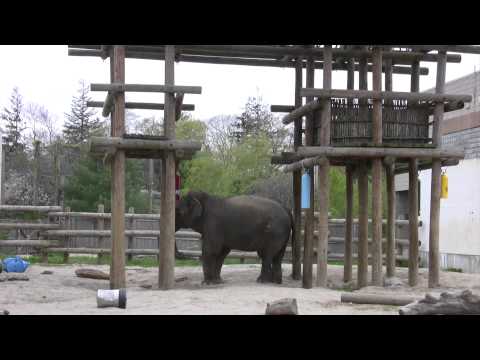 “Emily and Ruth are two of the sweetest elephants I've ever met,” Langbauer said. “Both of these elephants are as placid and sweet as you can get.”

They also both have interesting stories. Ruth, 54, had been considered a “striker,” or a dangerous elephant, when she was rescued 26 years ago from a garbage dump in Danvers. Rehabilitating her was a challenge, but Bill Sampson, Buttonwood Park Zoo’s head keeper, was up to it — and he learned a few things along the way.

“Slowly, over time, I realized that I was getting a better response if I was just a little kinder," Sampson told me. “They’re really emotionally sensitive animals, and if you’re in good with them and they like you, they’ll want to do anything for you.”

Emily, 49, is a little more remote. Langbauer describes her as an engineer.

"She’s very curious, but more about the environment than other animals," Langbauer said. "She likes to take things apart.”

Emily nimbly uses the so-called “finger” at the end of her trunk to do many things, including unscrewing nuts and bolts on her enclosure. The keepers have to constantly take inventory of the hardware to see what she has been up to.

And Emily does something else that's very curious: she drums. Using her trunk, she rhythmically thumps on anything that gives a resonant sound: doors, dumpsters and real drums.

Tipping the scales at about 8,000 pounds each, the girls can consume 200 pounds of food a day. They are eating machines, but more Veg-O-Matic than great white shark — they can fit whole watermelons in their mouths.

Even the way they drink is amazing. They pull water up into their trunks — about a gallon of it at a time — and then they firehose it into their mouths. It sounds just like a toilet flushing.

The Buttonwood elephants’ physical world isn’t very big and it’s not very exciting: a concrete barn, a sandy yard with a small stand of telephone poles with thatched lattice to provide shade, and a moat.

“One of our challenges is to give elephants the same sort of environment that they have in the wild,” Langbauer explained. He is currently negotiating with the city of New Bedford to gain more acreage for the girls. The amount of space he figures these elephants need is within reach.

In the meantime, Ruth and Emily’s keepers are always trying to increase what they call “the psychological space.” A little over a year ago they told me they'd thought of the perfect elephant toy: a metal cube, like the foot stand they use to give the elephants pedicures.

This gave me an idea. I phoned Chuck Stigliano, then the head of the sculpture department at MassArt, with an unusual request.

“We referred to you as the elephant lady,” Stigliano said. “How often do you get a phone call where someone says, ‘Do you want to make toys for elephants?’ ”

That’s how the class “Toys for Elephants” was born in the MassArt curriculum — and it’s been a hit ever since.

“There are people lining up to take this class. It's gotten a lot of attention at the school and everybody wants to know about it.” Stigliano said.

The First Day Of Class

At the start of the semester this year, just as the year before, the students came to the zoo to meet the elephants and get some advice from the staff. “Dr. Bill” Langbauer and “Keeper Bill” Sampson — referred to by the students as “The Bills” — told them many things about what the elephants like to play with and how the animals probably perceive their world. But their best advice was for the artists to follow their instincts.

Then Sampson interrupted: “The suggestion is, go for broke. Go ahead, let your imaginations run wild.”

The encounter with the elephants and the elephant experts had the students feeling energized.

“What does the elephant want to do? What can we do that the elephant will want to play with, that will help the elephant?” student Mike Aviagnos mused. “In this environment they’re being taken care of and this is a great place for them to be, and so if we have the opportunity to help make it better, why not?”

Ultimately, these young artists were charged with making toys that would be entertaining, safe and fun to break, if not indestructible. Over the semester, they gave it their best shot.

On a bright sunny morning, as students, professors, zoo staffers and reporters swarmed the elephant yard, the completed toys were toted in on a backhoe and everyone got to work.

First, the "pachysack" was rolled in — a pretzel of 17 tire treads bolted together.

Nearby, attached to the side fence on a pivot, was a rainstick built from steel tubing. It’s the right diameter to hold an orange or apple in each end, to entice the elephant.

“Spin it over and make it rain,” Aviagnos said. “There’s about ten seconds of nuts and bolts [inside.]”

Front and center in the elephant yard was an eight-sided wooden barrel with trunk-sized holes.

“The 'octo-log' is the premier pachyderm percussion," in the view of Alex Stoltze, who helped design it. "It is an elephantine rattle, it can be used as a feeder. It is the wonder toy, in my humble opinion.”

After much welding and hammering, the "elephant spelling bee" was hung on the fence near the rainstick. It’s a chartreuse-colored metal box with the word “Elephant” cut out. There’s a bolt in the slot the letters make and food drops out as the elephants move it around, tracing each letter. Marta Szpilewska, who made it, was happy to see it up.

“It looks fantastic!” Szpilewska said. “I’m so happy with it!”

On the opposite side of the yard, a team went to work bolting a large, red steel box onto a log structure left over from last year’s toys. It’s called the "dial-a-snack." When the two rotating discs inside the box are lined up properly, a trunk can reach in and snag food from the back chambers.

It took hours to make sure these toys were strongly secured — after all, Emily is nearly a safe cracker — but finally, to the relief of the elephants, keepers, spectators and students alike, the barn doors were opened and the elephants stepped out.

It was a slow-motion version of Christmas morning as Ruthie and Emily lumbered over to each toy. At first they stuck together. Emily took a good look at the "pachysack," then Ruth did too. As Emily moved in on the "dial-a-snack," Ruthie began to explore the other toys. Both girls took their time, pausing often to scoop up sand with their trunks to throw on their backs.

A giant snowball of frozen fruit from a student-made mold called the "icy munch-munch" was a big hit. Emily extracted almost every treat. The girls seemed to enjoy a longer-lasting toy too: Each elephant was able to toss the 300-pound "octo-log" like it was, well, like it was a toy.

“We love the elephants, you know, we want to entertain them,” Alexis Decamp said, speaking for all her classmates. “It's kind of like a privilege to be making these things for them.”

“I think it went awesome!” Langbauer said. “Our elephants are always trying to solve problems, and these toys give them another way to try to figure out the problems, but in ways that are less destructive but still enriching.”

And how about the elephants? The most telling moment this day was a quiet one, when Ruth left Emily and the toys behind to visit with head keeper Bill Sampson who was standing outside the fence, near the Elephant Spelling Bee.

“Hey, Ruthie, you’re not supposed to be coming to see me, you know that don't you?” Sampson said quietly to her as he rubbed her trunk. She responded with elephantine sounds of contentment, a low rumble and a funny trumpeting call that sounds a little like a Bronx cheer. Sampson spoke back to her both in English — “You're a good girl, Ruthie" — and in his own version of elephant talk.

Eavesdropping on this conversation between old friends reminded me of what's really important for these captive elephants: the bonds they form.

The zoo staff reports that the Octo-Log seems to be the elephants’ favorite — they still play with it every day. But there will be more toys coming their way since MassArt plans to continue offering the class at least once a year.

Vicki Croke's books include "The Lady And The Panda." She is the former "Animal Beat" columnist for The Boston Globe.