I’m not a creature of habit, not of good habits anyway, but over the past two years I’ve developed a healthy new one. Once a month I go to the Coolidge Corner Theatre for the Goethe Institut Boston’s late Sunday morning screening of a new German language film. My routine: take-out coffee at Peet’s, a movie, and brunch afterwards.

The Goethe Institut Boston’s New German Films series at the Coolidge offers an impressive selection of solid to excellent films that Boston filmgoers may not otherwise have a chance to see. (Full disclosure: I've had professional relations with both institutions.) A couple of my favorites are representative of the “Berlin School” of filmmakers: “Barbara” (2012), directed by Christian Petzold, which went on to open here commercially, and “The Robber” (2010), directed by Benjamin Heisenberg, based on a story about real-life bank robber and runner Johann Kastenberger.

On Sunday, February 24 at 11 a.m., the series, in cooperation with Swissnex Boston, presents “The Foster Boy” ("Der Verdingbub"), a feature film by Swiss director Markus Imboden. A major box-office success in Switzerland, “The Foster Boy” shines a light on a sad chapter in Swiss history when thousands of orphaned, illegitimate, and impoverished children were sent to live with farmers and serve as cheap labor. These children came to be called the Verdingkinder, “discarded children.” The practice, which began in the early 19th century and continued until 1950, was prevalent in German-speaking, Protestant Swiss cantons.

Max, played by talented newcomer Max Hubacher, is a Verdingbub, a “discarded boy.” An orphan, he is exploited and abused by farm family members, themselves stunted and debased by lives of grinding poverty. Every bit as appalling as the relentless abuse is the authorities’ willingness to turn a blind eye to it.

All that sustains Max are an accordion and his friendship with another “discarded” child, a teen-aged girl, whom the family also mistreats. A talented musician, Max dreams of going to Argentina. A kind teacher takes up Max’s cause, and it’s hard to believe that her neat, bright 1950s apartment exists in the same world and century as the farm family’s dark hovel. 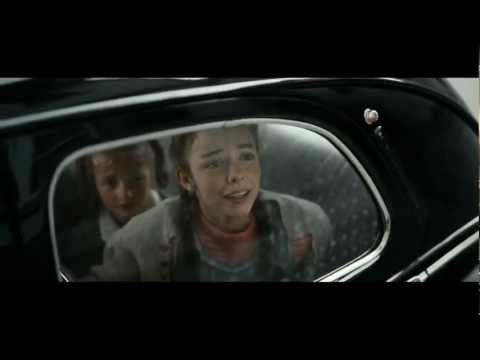 Switzerland’s approach to its difficult social and economic problems was no aberration. Between 1854 to 1929, New York and other East Coast cities shipped tens of thousands of orphaned and poor children west on “Orphan Trains,” to live and work on farms in rural America. From 1869 until the late 1960s, a British child migration program known as Home Children sent over 100,000 children from the United Kingdom to Australia, Canada, New Zealand and South Africa. Still, the Swiss practice is shocking and is a far cry from the Switzerland of the beloved “Heidi” children’s books.

Disturbing subject matter notwithstanding, it’s a treat to watch films like “The Foster Boy” and others in the series that I knew so little about beforehand. Having read no reviews, heard no word of mouth, or seen any trailer 10 times over, I go to them with an open mind, and it’s up to me to get my bearings and find my way through the films. Also, it’s satisfying to pick up on and consider the common themes that emerge, the legacy of a divided Germany being a major one.

In this regard, the series, run by Program Coordinator for Film Karin Oehlenschläger, supports the Goethe Institut’s mission. A world-wide organization, the institute promotes knowledge about German culture, society, and politics. There are also films at its beautiful Back Bay location at 170 Beacon Street as well as screenings with other local cultural organizations, colleges and universities. Director Detlef Gericke-Schönhagen regularly teaches film courses as part of the Goethe Institut Boston’s comprehensive German language program.

Upcoming films and dates include:

April 28, Hannah Arendt (2012), directed by Margarethe von Trotta (The director has been invited to attend the screening.)

All films screen at 11 a.m. at the Coolidge Corner Theatre. The series ends in June and starts up again in the fall.

Kaj Wilson hosts The Breakfast Film Club at The Coolidge Corner Theatre. She is the former artistic director of The Boston Jewish Festival. Reach her at kajwilson@yahoo.com