Do you believe in Magic? Lots of kids do, and there's a place they can go to perfect their prestidigitational inclinations: “Magic Camp.” This intimate look into a little-seen world by former aspiring magician turned filmmaker Judd Ehrlich follows a group of mostly boys through a weeklong workshop at Tannen's Magic Camp. The kids will also compete, reality show style, while learning the tricks behind the tricks from seasoned professionals who will evaluate and guide them through the week.

The quirky opening credits feature magicians-in-training arriving at what looks like Harry Potter's Hogwarts — a leafy green campus of cobblestones and gothic spires; it's actually Pennsylvania's Bryn Mawr college. As they show up lugging their trunks full of magical gear — rings, ropes, balls, fans, scarves, cards, and in one case, thimbles — we wonder, who are these kids?

That proves the most interesting question. "If you can't be a dork here, where can you?" says one 13-year-old to another while casually manipulating cards in defiance of the laws of physics. It's a poignant and revealing comment; many of the kids here are introverts, loners, who perform magic as a way to feel powerful. Each of them aims to craft a unique act based on exactly who they are and what fascinates them. They will perform that act at the end of the week under the scrutiny of teachers and peers. It's a vulnerable — and often funny place to be.

The film zeroes in on a few key characters. One teenager is a devout Christian who sees magic as an expression of his faith — Christ as the ultimate magician who did the impossible. Another performs magic as an escape from the sudden, involuntary tics of Tourette Syndrome. Last year's winner of the Magic Camp competition has great technique, but it barely masks a sadness that might be explained by his father's traveling and his mother's early death. There's a young woman who sees herself as a pioneer in the world of magic — reversing roles and being "The Magician" instead of the ornamental assistant who is routinely sawed in half for the delectation of the audience. (Can anyone think of a famous female magician?!!) 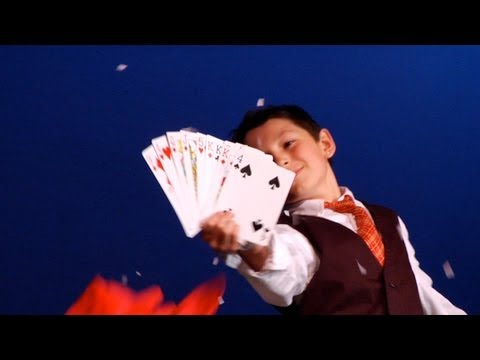 By the end of the week, one 12-year-old has succumbed to homesickness, another has suffered a family tragedy, while another has had a pivotal insight about what direction his life should take. All of them have struggled, practiced their sleight of hand into the wee hours, reveled in the camaraderie of like-minded "nerds," and finally, laid it all out there—under cover of magic—before a live audience.

We have gotten strangely close to these kids over seven days through the gentle scrutiny of this wise filmmaker's unobtrusive camera. Without giving too much away, Ehrlich has lifted the curtain on these budding magicians so that we see, through the tricks of their trade, exactly who they are. That’s no small trick.

“Magic Camp” is playing for free as part of the Outside the Box Festival this Sunday, July 14, at 2 p.m. at ArtsEmerson's Paramount Center, Bright Screening Room in conjunction with the Boston Jewish Film Festival. It's followed by a Q&A with director Judd Ehrlich. To secure a seat and see North Shore native Evan Northrup’s special pre-screening magic show, plan to arrive at 1:30 p.m.

Joyce Kulhawik is an Emmy Award-winning journalist, President of the Boston Theater Critics Association and member of The Boston Society of Film Critics. You can read her reviews online at JoycesChoices.com.

More Outside The Box:

13 Bands To See For Free At Outside The Box Fest

A Winning Bet: Shakespeare On The Common Goes Vegas

This program aired on July 12, 2013. The audio for this program is not available.