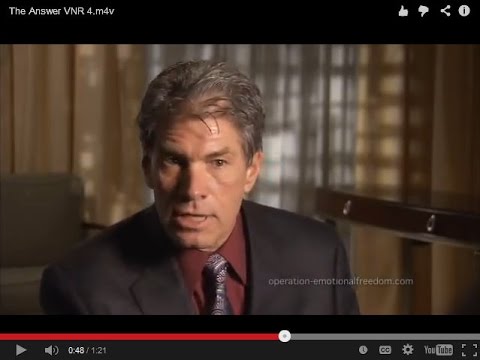 A couple of years ago, we wrote about an intriguing but kind of fringey therapy involving tapping different body parts as a way to treat post-traumatic stress syndrome and chronic pain.

Called "Energy Psychology," "Emotional Freedom Technique" or simply "tapping," the practice uses exposure and desensitization to “defuse” painful emotions associated with trauma. By tapping a series of acupuncture points on the body, and repeating certain phrases related to the negative event in an accepting way, the emotional intensity of the bad memory deflates, the theory goes, and the grip of trauma melts away.

Harvard Medical School psychiatrist Rick Leskowitz, director of the Integrative Medicine Project at Spaulding Rehabilitation Hospital and a longtime practitioner of the technique, called it "the most impressive intervention I’ve encountered in 25 years of work.”

Now, it seems, tapping is getting a bit more respect.

In addition, two new research articles by Dawson Church — one an overview and another on the results of a clinical trial evaluating Emotional Freedom Techniques for PTSD in war veterans receiving mental health treatment — have been released, offering further evidence for the effectiveness of the practice. (The overview piece is scheduled for publication in August but will be available online shortly.)

And an effusive Huffington Post piece in May by Larry Burk, M.D., a certified energy health practitioner  declared: "The Tipping Point for Tapping: EFT Goes Mainstream:"

The global reach of EFT got taken to the next level in February when the World Tapping Summit, sponsored by HuffPost blogger Nick Ortner and his sister Jessica, had about 500,000 people online from all over the world learning the latest tips for free from 20 of the top tappers. Included was my teacher, Carol Look, author of Attracting Abundance with EFT, who was one of the therapists in the Operation: Emotional Freedom pilot project for veterans. The abundant EFT blessings continued when Nick's book The Tapping Solution was published by Hay House and shot up the bestseller lists.

Considering the epidemic of trauma around the world, it is important for everyone to learn to tap and heal themselves, not only health care professionals, but also laypeople. Many of the leading tapping teachers are lifestyle coaches, such as Cheryl Richardson, who prompted me to learn EFT in 2002. When Cheryl heard I was already doing acupuncture and hypnosis at Duke University Medical Center, she suggested EFT would be the perfect combination of both techniques. My very first use was for a Duke student with severe hives after a serious car accident, which resolved completely in one short session.

As Leskowitz told me in an email: "EFT is on its way to being recognized as the treatment of choice for PTSD - quicker and more effective than anything else, with improvements not typically seen in standard medication or cognitive-behavioral therapy."

Readers, what do you think? An effective new therapy? Placebo effect? Please let us know.

This program aired on July 23, 2013. The audio for this program is not available.