BOSTON — In his brief time in office, President John F. Kennedy faced some of the most consequential issues in American history: the civil rights movement, the Cuban Missile Crisis, the construction of the Berlin Wall. Historians are still studying Kennedy's leadership during those momentous events, but perhaps the most tangible evidence of JFK's legacy is the Peace Corps.

At 2 a.m. on Oct. 14, 1960, then-Sen. Kennedy delivered a brief speech on the steps of the University of Michigan's student union. He challenged the audience of students who had waited hours to hear from the presidential candidate.

"How many of you who are going to be doctors, are willing to spend your days in Ghana?" Kennedy asked. "On your willingness to do that, not merely to serve one year or two years in the service, but on your willingness to contribute part of your life to this country, I think will depend the answer whether a free society can compete. I think it can! And I think Americans are willing to contribute. But the effort must be far greater than we have ever made in the past."

Kennedy's remarks that night kicked off an effort to create the Peace Corps volunteer program, which was officially established when JFK signed Executive Order 10924 on March 1, 1961, just 38 days into his presidency.

"Life in the Peace Corps will not be easy," Kennedy said in signing the order. "There will be no salary, and allowances will be at a level sufficient only to maintain health and meet basic needs. Men and women will be expected to work and live alongside the nationals of the country in which they are stationed — doing the same work, eating the same food, talking the same language."

Over 210,000 Peace Corps volunteers have served in 139 countries since Kennedy described his vision for the program.

Among those volunteers are Lisa Frederick, of West Springfield, and Emily Jones, of Dedham. Frederick, president of the Boston Area Returned Peace Corps Volunteers, served as a health extension volunteer in Mali from 2004 to 2006. Jones served in Togo from 2010 to 2012 as a girls education and empowerment volunteer. She is now a student of community development and public policy at Harvard's Kennedy School of Government.

Both Frederick and Jones described their Peace Corps service as Kennedy originally imagined it.

"I worked at a local health center, trying to educate young mothers on prenatal and postnatal care for their children," Frederick said. "I lived in a mud hut my first year, without running water or electricity."

“It’s very integrated community development, where you’re not just doing this technical expertise, you’re doing cultural sharing," Jones said. "It’s not always as tangible — the benefits — but then, down the road, you can see that it’s more durable.”

One of the three goals that JFK established for the Peace Corps was "to help promote a better understanding of Americans on the part of the peoples served." Frederick felt that she not only achieved that goal, but expanded her own horizons by learning about Malian culture.

"The little bit of television and things that get over to Africa, especially, are bad soap operas sometimes, and rap music and Celine Dion," Frederick said. "I think it definitely gets them to get a sense of what real Americans are like and that, for Americans too to understand, for me, that families and people are all the same no matter what country you’re in."

Kennedy's push for public service also left an impression on his alma mater. The Harvard Graduate School of Public Administration was renamed the Harvard Kennedy School of Government in 1966.

Marvin Kang, of Singapore, is getting his master's in public policy at the Kennedy School with the help of Singapore government's public service fellowship, which covers the cost of his undergraduate and graduate degree. He will return to Singapore next year to work for the government for six years.

“I think that particular quote had a huge impact on my decision to come to the Kennedy School, as compared to a lot of the other schools, to do the same program of public policy,” Kang said.

Colin Jones, of Amherst, is also a student at the Kennedy School and a veteran of AmeriCorps, a cooperation for national and community service. He noted the immense host of challenges, domestic and international, faced by the millennial generation.

“We have to look back at periods of time when challenges like this were faced and that was the hand that JFK was dealt,” Colin Jones said. “We have to start to see people in the world that we don’t think we can talk to and we have to break those barriers down. JFK wrestled with that in his relationship with the Soviet Union and we have to wrestle with that in our relationship with the Middle East and other regions in the world.”

“There’s so many good quotes,” said Emily Jones, enthusiastically sifting through a pile of papers on which she had scribbled some of JFK’s greatest hits.

Colin Jones looked over and selected one from Kennedy's 1962 "moon speech" at Rice University.

“That’s the challenge of our generation," added Emily Jones. "To try to decide, do we want to go the easy route and be just for ourselves? Or do we want to be for others too, and strengthen the entire community for the long term?” 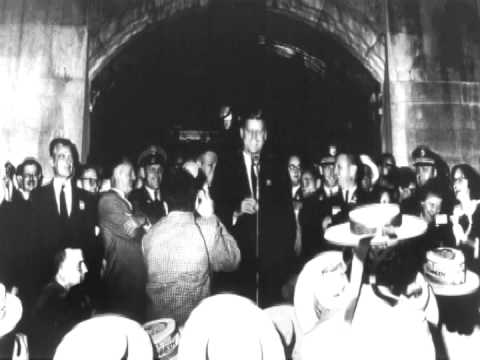 This program aired on November 12, 2013. The audio for this program is not available.