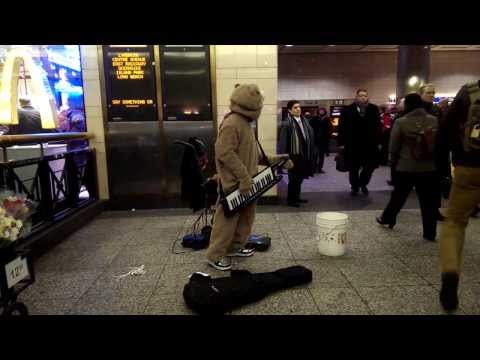 It was probably only a matter of time before some enterprising and talented street musician decided to don a teddy bear costume so that he might make funky work of pop jams on the keytar (that’s a keyboard-guitar hybrid, duh), winning over MBTA commuters and Faneuil Hall tourists alike.

Apparently, it was also just a matter of time before some jerk sucker-punched him in the nose. That perpetually smiling visage, plush and forgiving, evidently proved too tempting for some knuckle-happy knucklehead.

The anonymous man behind Keytar Bear, as he is known, reported to Boston Magazine in an article published on April 29 that he was attacked on two occasions. The first time, he says, someone threw a Snapple bottle at his keytar, damaging the instrument, and then taunted him from a distance. The second alleged attack occurred when a bystander, after taking a selfie with the performer, socked him in the face, breaking his nose. On May 1, an eight-second video surfaced, which appears to show a man hitting the costumed musician in his furry mask, before it abruptly cuts off.

Word quickly spread on social media about the attacks, and Abigail Taylor, a Keytar Bear fan, decided to raise some money for the injured musician.

“I was having this discussion on Twitter, with a couple of my friends, and they were like, ‘He must be feeling like he never wants to play in Boston again. ... Boston looks like such a jerk right now! Can you imagine what that looks like?’ ” Taylor remembers. “And I was like, no, we’re not like that. We’re not just one meathead who punched someone in the face. We’re a community that is supportive of our artists.”

Taylor is organizing a May 8 benefit — originally to be held at Workbar in Cambridge, but due to the great outpouring of support now scheduled for the larger Middle East Downstairs in Cambridge. She also launched an Indiegogo campaign, designed to raise enough money to pay for a new keytar. The campaign surpassed its $2,500 goal in the first 24 hours. All the money collected at both fundraisers, says Taylor, will go directly to Keytar Bear, no strings attached.

“It didn’t matter to me how he spent it, I just wanted him to know how much Boston cared about him,” explains Taylor, who says the musician has been supporting himself through creative pursuits for the past three years. “Now it’s well over five grand. I’m nervous about it, for sure. He’s kind of been living day to day for so long that he doesn’t even have a bank account. So right now I’m struggling with trying to get him a trustee so that we can get him this money without it being a danger to him to have it. He’s kind of a target now.”

Nevertheless, Keytar Bear will be making an appearance at the benefit concert, along with local electropop band Freezepop, the Dirty Water Brass Band and DJ Chris Ewen of the popular dance night "Heroes" at Zuzu in Cambridge. They will be in good company. Keytar Bear is a charismatic entertainer, prone to impromptu dance breaks during his performances, and a rather dazzling keytarist, unencumbered by the scruffy paws that cover his hands. Countless YouTube videos show him positioned next to an amp, taking brisk, whimsical solos over songs like “Locked Out Of Heaven” by Bruno Mars and Michael Jackson’s “Beat It.”

In response to the outpouring of public support, the musician released a statement. It reads, in part: “To the person who hurt me, I forgive you for punching me and breaking my nose after taking a photo with me downtown last week. ... I have decided not to file a police report immediately so you can have a chance to step up and take responsibility for your actions before the police come knocking on your door.”

Taylor explains that Keytar Bear’s decision, thus far, not to file a report is fuelled by his distrust of the police. “He has a couple of friends who are trying to convince him to file a police report. And his reasoning [not to] has a lot to do with his race, and how his particular race has been treated by the police for a very long time, and also the kind of discrimination that happens in courts when there’s a white kid and a black kid. And what happens there is usually that the black kid suffers. So he has been very suspicious about that process. Basically all he wanted was an apology.”

Keytar Bear himself has alluded to this theme before. In an interview with Boston Magazine published on April 4, he pointed out that when he wears the costume, his race is not a factor in how people perceive him: “I’m trying to kill racism in my own little way, you know what I mean? You don’t know if [I'm] black or white, you just see a little bear. He’s playing music and he’s having fun.”

Though Keytar Bear initially took some time off after the attacks, Taylor says that he is planning to return to busking, though it is unclear if that will happen in the spring or the fall. (Keytar Bear says it is too hot to play outside in a bear suit in the summer.) In the past, he has been spotted at Faneuil Hall and the Downtown Crossing and Harvard Square T stations.

“He thinks — and I think this too — that after all the media attention, he’s going to be feeling a lot safer on the streets,” Taylor notes, pointing to the many sentiments of solidarity expressed by Keytar Bear fans online.

Yet according to Taylor, the incognito keytarist doesn’t feel secure enough to jettison the bear costume, even at the fundraiser.

“I don’t know what will happen that night, as far as if he’ll say anything official. You know, if he’ll want to say any words,” she says. “But I don’t think he’s going to take the bear costume off. As far as I can tell, right now he wants to stay pretty anonymous.”

Amelia Mason is a writer, musician, and bartender living in Somerville. She is a regular contributor to The ARTery. You can follow her on Twitter @shmabelia and Tumblr.

This article was originally published on May 07, 2014.