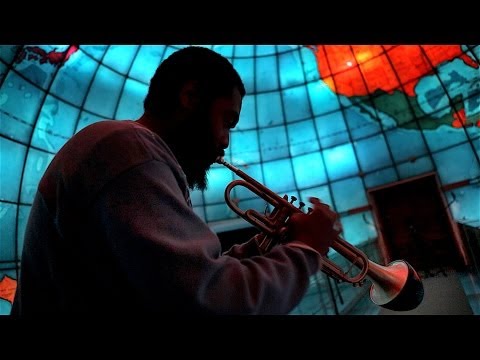 Ask Forbes Graham about how he describes his music and you’ll know right away, he wasn’t born to do PR.

“It depends on how much time I have,” says Graham, “sometimes I’m just like, ‘It’s weird-ass music.’”

A web developer by day, by night—and in spirit—Graham is a 37-year-old trumpet player, laptop musician and a composer. Yes, his music is weird. But “weird” doesn’t capture the whole reality of his sound; it’s simply a starting point for his rich, experience-driven music—one that resists confining itself to the cage of a genre.

Thick and episodic, fat with streams of electronically-twisted recordings, his sound can mimic a Debussy symphonic sketch more than Urban Outfitters electro-pop. It’s the kind of music that goes best with a deep breath as it waits—begs you to wait—before revealing itself in small, satisfying chunks of punkish noise, jazz riffs and guttural trumpet growls.

Somehow, Graham is able to roll this scattered diversity into a meditating sum.

For the Off The Record recording, Graham—a native of Silver Spring, Maryland, now making his home in Roslindale—stood out on the thin bridge that cuts through the center of Boston’s Mapparium at the Mary Baker Eddy Library, under the technicolor wash inside the hollow stained-glass globe. He stood unassuming and seemingly unmoved by our bulk of cameras and microphones as we prepared to film him at work—his attention, even undistracted by the majesty of the Mapparium’s glowing oceans and deserts. His eyes fixated on his laptop; ears on the sound.

Graham’s motions are measured. He listens, smiles (sometimes) and speaks slowly, only when it seems he has something worth saying. His half-foot-long beard is one that, in words, could easily be mistaken for token hipsterism, but, in truth, reaches back to that same Old World of the globe that surrounds us. Add in the Bill Cosby-like sweater and you may not have a clue what kind of music this guys actually plays.

And what does he play? It’s a good question.

“I was always interested in things that were different,” says the trumpeter, who spent more than a decade gigging with free jazz, experimental and heavy metal bands in and around Boston, Providence and Washington, D.C. “Sometimes when you’re in an ensemble ... even when you’re the leader, you have to understand the things that work for [others],” notes Graham. “That’s part of why it’s a diverse range of stuff.”

Graham began with classical and concert music on the cornet when he was 9 years old. He picked up the trumpet, and when he was in the ninth grade, dipped his toes into jazz. “I never took lessons for jazz,” Graham admits. “I just played jazz.”

In his teens, Graham remembers rock and death metal. “There was this band called Atheist,” he recalled. In an interview, “the lead singer ... he was like, ‘We’re death jazz’, and I was like, ‘Woah, that’s kind of crazy.’” Graham had drunk the Kool-Aid, or rather, many Kool-Aids.

Death jazz is not exactly what we heard, standing there under the light of the Mapparium, but after years playing equal parts jazz and heavy metal, it shares the same sentiment. The music of Forbes Graham is gritty and tense, yet it never hammers you with that tension. It warps with freedom and improvisation. It cools, relaxed over ice in that terrifying way where you’re not sure if it’s given you frostbite.

His piece, “Going In,” for example, forms out of the dust of nowhere. Noisy whispers lurk in chambers, reverberating off of the spherical walls. His trumpet weaves in and out of the unidentifiable computer sounds, like a duet. The horn floats down, grounding the story with melodic flutters, while the laptop curls like a piano of vibrating tin.

“I thought of it on my way home,” Graham says.

The piece uses the noise of the MBTA that Graham recorded on his commute to work. Bits of train sound loop and refract as the trumpet plays against it, like a busker lost in the bowels of lower Boston.

With ease, Graham breaks down the musicality of the MBTA as if he were analyzing Igor Stravinsky or Ornette Coleman. His trumpet plays off of the tone of train bells and moves with the rhythm of the motor. It ends with a final call like the last train through, far away before you even reach the platform.

His greatest strength as a creator is that he is not pretentious about making music that normally comes with an air of pretension. He has the gift of creating complex sound, using human vernacular elements. It is intellectual without being academic.

Graham is not always channeling the abstract. “I hang out with my wife and son. And I go to work. I go to class or whatever.” He says that he’s not much of a socialite, shaking hands just to get that great big break. But he does like playing the scene.

“That’s a lot of how I relate to people for better or worse,” says Graham, “playing music and doing rehearsals and stuff like that.”

Today, you can usually find Forbes Graham at local clubs like the Lilypad or Charlie’s Kitchen in Cambridge. But don’t always expect the full-blown “weird” experience.

“Every now and then I’ve done a gig live and I’ve done that and the results are varied,” recalling a night at Charlie’s Kitchen. “I had some recording of streams and I distorted them … and there were people yelling in the back to turn it off and I don’t blame them!” he laughs. “But, hey, I was there and that was what was going to happen that evening.”

After what feels like hours of filming—after the sound cascades away and the trumpet signals its good-bye—we ask him if he could try it again.

“Try it again?!” The outburst is strained and exhausted. As if the music cannot be repeated. It’s already lived and died. Like jazz, but not. It could never be the same twice.

We’re still staring at him. His calm returns. Graham takes a deep breath. “Ok, I’m ready.” He’ll do it again. He’s just that kind of guy.

WBUR's Off The Record records video performances and radio interviews with local and national musical acts in the wilds of Greater Boston. Follow us on Twitter @OTRwbur and on Tumblr at http://offtherecordwbur.tumblr.com