Jeremy Denk lives in another world. Or at least in another time. A time when facile expertise, in a variety of the arts, made perfect sense. When writing and music-making mattered. When the arts provided illumination, but also humor, frustration, desire and inspiration. A time when music could change things.

Jeremy Denk changes things. His explorations at the piano keyboard, with in-depth performance and recording projects tackling the difficult works of Ligeti, Beethoven, Ives and Bach, are one way. His scholarly writing, profound essays of quality and insight about the same composers, and Think Denk blog about life as a musician, are another.

And with yet another facet, an alternate artistic side, his libretto to the new opera, “The Classical Style,” a collaboration with composer Steven Stucky, creates a one-of-a-kind experience: a comic opera inspired by a musicological treatise. Don’t look for that to become a thriving genre anytime soon.

Denk’s upcoming area appearances (Aug. 11 in Rockport at the Shalin Liu Performance Center, and two evenings later in Ozawa Hall at Tanglewood) are as outsized as his other projects. The recital — same program both nights — includes the entire Bach Goldberg Variations and Charles Ives’ lengthy “Concord” sonata. He’s performed the program before “five or six times,” he says, but each presentation creates a concert challenge for audience and performer. 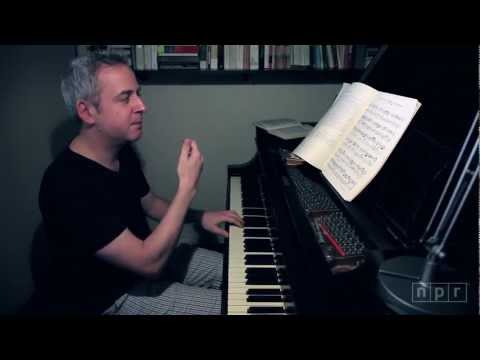 “Both are kind of happening pieces,” Denk says on the phone from his home in New York. “Neither one wants to inhabit the frame that the concert format allows. They are two different statements, both considered a magnum opus.

“In a way, though, it’s a natural pairing, for me at least. I tend to like programs with music you would never expect. Where different worlds meet. That are hard to imagine.”

There can be no real summing up of either piece, as Denk’s own lengthy liner notes to his Ives’ recording (Think Denk Media, 2010) and his accompanying DVD performance notes to his Bach recording (Nonesuch) show. Ives pays tribute to the Transcendentalists in his own way, and the four movements, diverse in character and mood, touch imaginatively on the composer’s impressions of Emerson, Hawthorne, the Alcotts and Thoreau, in that order.

Bach’s Goldberg Variations “present a weird paradox,” he says. “Someone who is thought of as the most universal composer turns out to be the most controversial. Of course it’s much less notated, in terms of tempo and dynamics. So a lot more is left to the performer's imagination. And most of it is very learned; whatever style Bach can grab from, he does.

“I think it is important to remember that Bach would have been mystified that the Goldbergs would be performed in public. I think he assumed they would only be heard by the person performing them.”

Denk says that he may say a few words “only about the Ives” during the performance. It leads to a discussion about his own music writing, and his quite successful career as an essayist.

Denk’s work has appeared in The New Yorker, The New York Times and The New York Review of Books — a publication that his mentor and friend, Charles Rosen, who was also the inspiration for his opera, contributed to for decades.

“I write because it gives me pleasure,” Denk says, after some thought. “I think maybe that it breaks down that sense of distance between audience and performer. Let’s face it, the Internet did me a great favor” — referring to the popularity of his Think Denk blog — “by allowing me to write about some things that could not be brought up in performance. It certainly increased the audience.

“The thing that classical music suffers from is the difference in time period, the music in one era and us living in another. Resolving that cultural difference in a recital is impossible. But for me there is no difference. Playing Bach, and going to see a terrible movie at the Metroplex, they are part of the same thing. Writing about that helps break down that sense of difference.

“Nabokov said that the true reading is re-reading. And it’s just not the same thing as playing a recording over and over again. Writing helps capture that. We talk about falling in love, we talk about eating dinner. Why can’t I write about music? I think there is this weird assumption that music exists beyond words. In my case, I think that I manage to draw some people to concerts because of what I write.”

It’s been a prodigiously busy summer for Denk, which really is not out of the norm. He was the artistic director of California’s Ojai Festival, where “The Classical Style: An Opera (of Sorts)” made its debut in June. There were solo recitals as well — at Ojai and at Aspen — and an appearance this week with the Philadelphia Orchestra in its summer home.

“The Classical Style” creates a world apart, not only for audiences but for Denk himself. He conceived of the project, wrote the comic libretto, and collaborated with Stucky on the score. The cast features conductor Robert Spano, the versatile orchestra The Knights, and eight singers who share roles.

The opera is based, improbably, on Rosen’s treatise on Beethoven, Mozart and Haydn, which won an equally improbable National Book Award in 1971 and has stayed in print ever since. The book challenges the previous relationships between those composers and the assumed progression from “classical” ideas to “romantic” ones.

The opera imagines all three composers (and others) in heaven, joined by unlikely characters named Tonic, Dominant and Subdominant, and by Rosen himself, all of them woven together in a humorous exploration of music and life.“It turned out to be really funny, and touching, in the end,” Denk says. “I think Steven and I were relatively happy, with certain reservations. After the New York performance in December we may do some revising.“We loved the cast for espousing the work. I tried to write a libretto that would be really fun, and they clearly did have a lot of fun."

“Rosen was a mentor and a colleague,” Denk says about the pianist and scholar, who died in 2012. “We had many dinners, and many lessons, together. For me, he was capable of some beautiful feelings, a mixture of wonder and erudition. In ways that sort of feeling for classical music is dead."

“But I definitely don’t think classical music is dead,” Denk adds quickly, as if to summarize. “There are problems, for sure. But like Ives and Bach, there are works that are ambitious outside of themselves. They are lovers of chaos, and the unexpected. My Ives always changes, and my Goldbergs always change. That depends on the times. That depends on where you are.”

Keith Powers, former music critic at the Boston Herald, now freelances for a number of newspapers and magazines. Follow him on Twitter @PowersKeith.