MIT neuroscience professor Pawan Sinha still gets goosebumps when he thinks about it, he says: "Things just happened so perfectly, so well-timed."

Back in 2002, Sinha was grappling with a deep scientific question: How do we learn to recognize the objects we see? How do our brains know, "That’s a face"? Or "That’s a table"?

A fateful taxi ride set his research — and his life — onto a new road.

He was back visiting New Delhi, where he grew up on the elite campus of the Indian Institute of Technology before coming to America for graduate school. He was on his way to see a friend one evening, when the taxi he was riding in stopped at a traffic light.

"I noticed, by the side of the road was this little family, a mother and her two children," he says. "And it felt really terrible to see these two children, who were barely wearing any clothes, very young children on this cold winter day. So I called over the mother to give her a little bit of change."

When she approached, Sinha noticed that both of the children holding on to her sari had cataracts clouding their eyes.

It was the first time that he had seen children with cataracts. When he looked into childhood blindness in India, he learned that it is a widespread problem, often caused by rubella during the mother's pregnancy. Blind children in the developing world suffer so much abuse and neglect that more than half don’t survive to age 5, he says. 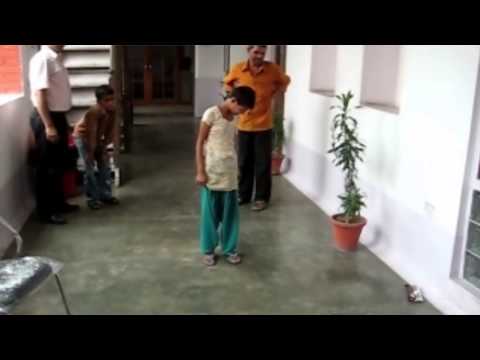 Sinha wanted to help, but he figured that what he could contribute on his academic salary would be just a drop in the ocean.

"And that’s when the realization struck me that in providing treatment to those children, I would have exactly the approach that I had been looking for in my scientific work," he says.

"If you have a child, say, a 10-year-old child who has not seen from birth, has only seen light and dark, and in a matter of half an hour you’re able to initiate sight in this child, then from the very next day, when the bandages are removed, you have a ringside seat into the process of visual development."

Sinha applied for a federal grant to pay for cataract operations, which are relatively simple, and for studying the children who got them. Usually, American research money stays in America, "but I took a chance because I completely, honestly believed, and believe, that in providing that surgery, we are benefiting science that belongs to all of mankind, it’s not just specifically India."

That grant eventually came though and to continue the work, Sinha founded a nonprofit based in New Delhi. He named it Project Prakash; Prakash means "light" in Sanskrit. Since 2005, he says, nearly 500 Indian children have gained sight through the project.

Now, at 48, Sinha is planning a major expansion of Project Prakash, to create a center that includes a hospital, a school and a research facility. The goal is to serve many more children than the current 40 to 50 a year.

"So far over the past nine to 10 years we have treated 472 children surgically," he says. "It feels nice to say that, but in the grand scheme of things it’s a minuscule number, if you put it next to the number of children who actually need treatment."

That number, he says, is on the order of 300,000 Indian children with treatable or preventable blindness.

Fifteen-year-old Hemvati had surgery to treat her cataracts through Project Prakash; in a Project Prakash video, she tells Sinha that when she grows up, she wants to be a doctor like him. “Just as you helped me," she says, "I want to help others.”

Some Project Prakash children like Hemvati are already helping others — by volunteering as research subjects, on visual tests and brain scans.

The findings on the Project Prakash children help cast light on basic but crucial questions about how the brain is organized, Sinha says, and about plasticity — the brain’s remarkable ability to change, even in later life.

Researchers from MIT and around the world have published 15 scientific papers on data from Project Prakash children, and five more papers are in the pipeline.

A note about ethics: An ethical review board oversees the project, and Sinha emphasizes that "treatment is never conditioned on agreement to participate in the scientific studies. "Treatment will be offered to the child, and if they choose" — and they and their parents consent — "they can participate."

Some say that the Project Prakash research challenges the famous "blind kittens," the subjects of Nobel Prize-winning neuroscience research from the 1960s. It found that if kittens’ eyes are sewn shut for a critical period after they’re born, they’ll never be able to learn to see, even after their eyes open.

But almost all Project Prakash children generally do learn to see — at least, far better than they did before. Before surgery, a child may barely see well enough to tell night from day; within days afterward, such children can often walk around using just visual guidance instead of feeling their ways along the walls. And within weeks, Sinha says, they may be able to recognize people and pick up small items of food from their plates

There clearly are critical periods in the brain when vision develops, he says, and the earlier a child’s vision can be improved, the better.

"But putting a threshold, that if the child is older than X years then it’s not going to be worth intervening, that’s what we’re trying to challenge," he says. "In every case, we find significant improvement in these children."

Overall, Sinha says, if there’s a central finding from all his work, it’s the importance of motion in helping us learn to make sense of what we see.

"So just showing a child static images of this or that object seems not to cut it," he says. "However when the child sees the world in motion — motion seems to almost hold the key for organizing the early visual experience."

Sinha has data on that early visual experience from a source that’s especially close to him: his son, Darius, who is now 8. When Darius was a baby, Sinha mounted a very light Webcam to his forehead, with the optics altered to have the poor vision of a typical newborn. Sinha’s wife, Pam, also a scientist, was not enthusiastic.

"But I didn’t want to let this opportunity pass," he recalls. "After all, this is quite literally a once-in-a -lifetime opportunity, that I have this little baby and I can observe how this baby learns, but even more significantly, perhaps, I can observe the world from that baby’s point of view.”

Sinha and his colleagues use such babycam footage as raw material for computational algorithms aimed at figuring out and simulating how babies learn to recognize faces and other objects. That work has found that even when it comes to recognizing faces, motion is key.

Research by Project Prakash has also provided an answer to a 300-year-old philosophical debate.

MIT professor emeritus Richard Held, a Project Prakash collaborator, proposed trying to solve the Molyneux question, "and sure enough, we did — in India!" he says. "At least, we made a heroic effort at it and found some interesting result, which we published."

Project Prakash researchers turned that old debate into an experiment. They followed five blind children who got corrective eye surgery.

"And what we found," Sinha says, "to our surprise, is that immediately after the bandages are removed, even though the children are perfectly capable of recognizing objects by touch, they cannot make the connection between what they are feeling and what they are seeing."

So the answer to Molyneux’s question was no: No, there isn’t an immediate transfer of knowledge from touch to vision.

But within a few days, Sinha adds, the children could make that connection. His conclusion: "We’re ready and wired to learn. We don’t come pre-wired with this mapping, but we learn it very, very quickly."

It's still more evidence, he says, that "Our brains are very plastic, very changeable.  Even in a child who’s 10 or 15 years old, this mapping can be learned very quickly. So the brain doesn’t entirely lose its ability to learn despite many years."

Held, at 92, calculates that he's been studying vision and the brain for six decades. "And I'm still working on it," he says, "still trying to gouge out secrets and understand how the brain works."

Understanding how we learn to see, he says, could prove useful for medical treatment, and as basic science, "it's potentially a test of theories of the origin: Is it all built in? And just unrolls over time? Or does it involve interaction with the world to develop itself? That's perennial questions of nature/nurture."

Project Prakash, Held says, is helping to illuminate some of those questions. The project, he says, combines Sinha’s “acumen for science with his kindness and concern for people.”

"He is a very interesting fellow as well as a very kind person, a very concerned individual. He’s really a prince among men.”