On Dmitri Shostakovich’s gravestone in Novodevichy Cemetery in St. Petersburg, under his name, is a musical staff with a treble clef and his musical signature: DSCH.

Even in death he asserts his musical identity.

With a recording of Shostakovich’s Tenth Symphony, the first of series of releases on Deutsche Grammophon, the Boston Symphony Orchestra also asserts its identity, this time in its rebirth under young maestro Andris Nelsons.

The recording, made this past April in Symphony Hall, also includes the Passacaglia interlude from Shostakovich’s opera “Lady Macbeth of Mtsensk.” In addition to the performances at Symphony Hall, Nelsons conducted Symphony No. 10 at Carnegie Hall in May, part of a trifecta of BSO appearances in New York that brought widespread critical acclaim.

Nelsons will also be conducting it Saturday night at Tanglewood, along with Beethoven's Triple Concerto for Piano, Violin and Cello. 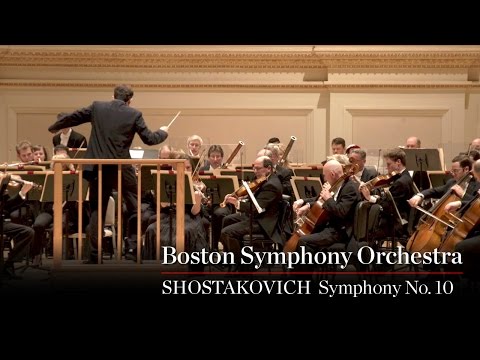 That Nelsons, born in Latvia in 1978 when it was still part of the Soviet Union, should feel a special affinity for the music of Shostakovich comes as no surprise. “I can’t entirely explain why I have such an intimate relationship with his music, but I feel like I know him, in a mystical way,” he says in the liner notes.

Such a feeling should prove fortuitous for all concerned. The BSO, unmoored after the long search for a director to replace Seiji Ozawa, and the subsequent unfulfilled tenure of James Levine, has found its image. Young, photogenic, disarming in person, emotional and accessible on the podium, Andris Nelsons brings life to organization. And as someone who has seen both old and new Russia, Nelsons is perfectly suited to bring genuine ideas to this music.

All that probably resonates with Deutsche Grammophon, which seems to be betting — given this five-album deal with the BSO — that there still is a market for orchestral music recordings. Just to be sure we’re getting the point though, Nelsons’ image and name take prominence not only on this recording but on the final two releases planned in this series, which is called Under Stalin’s Shadow.

The ominous marketing title delineates the timeframe of these works: Symphonies 5 through 10, and some incidental music, all composed between the years 1936-1953. The beginning date marks the start of Shostakovich's long nightmare with the authorities, when a damning review, assumed to be written by Stalin, of “Lady Macbeth of Mtsensk” was entitled “Muddle Instead of Music.”

From that point until 1953 — when Stalin died — Shostakovich lived in real fear for his life. Close relatives were arrested, his friends shunned him out of necessity and everything he wrote became the subject of scrutiny. His compositions, their reception and subsequent interpretations, were shadowed by Stalin’s presence.

Much of the conjecture about Shostakovich’s intentions while composing during this period is just that — conjecture. Does this passage refer to Stalin? Does this symphony mean Shostakovich was kowtowing the autocratic regime? Nothing can be trusted in this regard. Shostakovich’s music is personal, referential and self-referential, always emotional. The profound music has been done an injustice by its affiliation with the murderous dictator, so here’s hoping that these recordings, and the live interpretations that will precede them in Symphony Hall, bring a fresh, more appropriate focus to the works.

It’s easy to believe they will, listening to this recording. The scope of the Tenth is daunting — almost too much to experience in a recording, outside the confines of a performance hall that helps focus attention. The first movement alone is nearly half an hour long. Nelsons drives the movement — as he does the entire work — with a sense that it has a beginning and an end, and is not simply of a series of musical anecdotes.

The middle movements fascinate. The short scherzo catches fire, which, for its four minutes, never extinguishes. The third movement gets woven with Shostakovich’s musical signature (the DSCH, a clipped version of his initials, taken from German musical notation). But it also includes another musical signature, a reference to Elmira Nazirova, a student he had become infatuated with. The references are important musically: the Elmira motif (E-La-Mi-Re-A), sounded a dozen times in a solo horn, comes off touchingly, but with a foreshadowing, or an uncertainty. His own signature — ominous, downward turning — repeats here and throughout the finale.

That final movement, sounding part Mahler with its dance rhythms, part Bartók with its quirky, angry dissonances — but in the end all Shostakovich — gets frantic. Nelsons conducts at his best here, shaping the ungainly movement into a coherent story.

The inclusion of the Passacaglia interlude from "Lady Macbeth" makes marketing sense — this was the opera that began Shostakovich’s entanglement with Soviet authorities, after all — and the performance here is shattering. It’s challenging music though. Coupled with an hour’s worth of equally challenging symphony, this disc will never be easy listening.

The BSO already has a marvelous history with Shostakovich’s music. Serge Koussevitzky programmed the symphonies repeatedly in the 1930s and '40s, including the American premiere in 1942 of the "Leningrad" Symphony. The BSO was also the first American orchestra to perform in the Soviet Union, in 1956. And on Aug. 9, 1975, after intermission of a concert at Tanglewood, where he was conducting the the composer’s Fifth Symphony, Mstislav Rostropovich dramatically announced Shostakovich’s death earlier that day.

This begins a new era. Shostakovich will serve as one focus, among many, during Nelsons’ tenure at the BSO; the music of Mahler, Bruckner, Strauss and others seem to be predilections as well. But these recordings could serve as a benchmark for the relationship, and for a new look at this fantastic music, music that needs to grow out of its historical restrictions.

The upcoming releases from Deutsche Grammophon include double-album sets in May 2016 and in the summer of 2017. The first will have symphonies 5, 8 and 9, along with the incidental music to “Hamlet.” The last will include the monumental Symphony No. 7 (“Leningrad”) and No. 6, as well as the suite from “King Lear.”