The teens at the heart of “Milk Like Sugar” are hung up on two must-have accessories — a top-of-the-line cellphone and a baby.

Kirsten Greenidge’s Obie Award-winning 2011 play was inspired by a so-called “pregnancy pact” among Gloucester girls that turned out not to exist. (There was a spate of concurrent teen pregnancies in the town, but it turns out they weren’t planned like some group outing). Still, the seed was planted and Greenidge grew it into a spirited, poignant play that’s less about teen pregnancy than hard-pressed urban youth staring simultaneously at limited options and a bright cornucopia of desirable stuff.

“Milk Like Sugar” — seen here in a cocky Boston premiere by the Huntington Theatre Company (at the Roberts Studio in the Calderwood Pavilion through Feb. 27) — takes its name from over-sweetened powdered milk that’s longer on shelf life than on nutrition. It’s a staple in the lives of Annie, Talisha and Margie, girls of color who’ve been tight since seventh grade and are now cooking up a plot to get knocked up and have a giant three-way baby shower yielding Coach diaper bags and strollers just like Beyoncé’s. Best of all: “Tiny little babies made just for us, right?”

Margie has already been made pregnant by boyfriend Jerome, whose only liability is “his mom’s old push-button phone.” But Margie looks toward “the future: When he gonna get a touch-screen. These the kinds of thing pop into your head when you pass one of them [pregnancy] tests, you all: the future.”

Regardless of how naïve that sounds, Greenidge does not condescend to her spiky teen characters. It is, in fact, surprising how infectiously entertaining “Milk Like Sugar,” with its hip-hop transitions and joyful noises, can be when you want to weep for its feisty if misinformed young characters, whose opportunities are as stunted as their facts can be.

Not that this stops them from a bravura sort of confidence: Talisha is as sure of herself, and the pregnancy plan, as Margie is. It is only Annie (the only character specified in the script as African-American) who is caught between loyalty to her friends and her bond and inklings of a way out. These yearnings certainly don’t come from a home dominated by an unsentimental, puffing chimney of a mom, who got pregnant before she was out of junior high and regards any aspiration higher than putting food on the table as a put-down. But Annie finds her amorphous dreams — of college, a “Leave It to Beaver” family — encouraged by Malik, the very guy she’s been eyeing as a potential baby daddy. 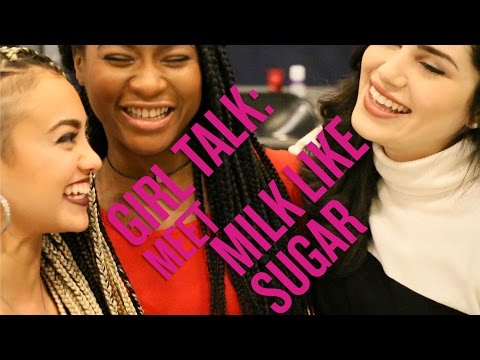 In this saucy yet lyrical piece that deftly mixes contemporary speech and attitude with metaphor, it is telescope-wielding Malik, eyeing the folks flying overhead in planes, who first throws the book at that powdered milk. “I don’t like those people up in that plane laughing at me. Cause the way I imagine it, they see me from my window, Annie,” he tells our mixed-up heroine. “They see into my window, they see the paint curling off the walls, they see my mom ain’t done the washing in weeks, they see there ain’t more than two packages of macaroni and cheese in the cupboard. They see that and they mouths crimp up into smiles and I wanna crush those smiles. ‘Cause all they see is some bone head baby daddy don’t know enough to use a rubber and end up stuck — paint curling, milk like sugar on the shelf.”

The Waltham-based, nationally produced Greenidge has been a Huntington Playwriting Fellow, and the theater presented the world premiere of her “Luck of the Irish” in 2012. I love that the Huntington is following up with this smaller-scale production, boldly and fluidly staged by associate producer M. Bevin O’Gara and featuring a terrific cast. Cristina Todesco’s blinking, utilitarian set suggests both a prison and a dance hall, and lighting designer Wen-Ling Liao tops it with a twinkling firmament for Malik to aim his ‘scope at.

Jasmine Carmichael is a convincingly young Annie, as thoughtful (and yet as callow) as Claire Danes’ Angela in “My So-Called Life.” Pakistani-American Shazi Raja is an aggressive yet vulnerable Talisha, Cuban-American Carolina Sanchez a bubbling spitfire of a Margie. Marc Pierre is all quiet hustle as Malik, and Ramona Lisa Alexander is all grudging responsibility as Annie’s overtaxed mom, Myrna. Matthew J. Harris is sensitive yet stoic as the tattoo artist who finds Annie “special” (at least for a night), and Shanae Burch is terrific as Keera, a frumpy yet sensuous teen trying to mend a tattered life with the Church.

There is nothing saccharine about either this sweet-tart cast or Greenidge’s tenderly funny, tough-as-lacquered-nails play.

An earlier version of this story stated that no cast members belong to Actors' Equity, the actors' union. In fact, several are indeed Actors' Equity members. We regret the error.