The GPS chirps out instructions as Tony Loftis pulls onto the highway in Acton: "Continue on Massachusetts 2 East for nine miles."

Loftis always leaves early — around 6:30 or 6:45 — to beat the worst of traffic, but sets the GPS anyway. Once or twice a week, he says, Google Maps will take him a different route than the one we travel this day.

Loftis grew in up New York City and lived in Somerville for years, but moved farther away from Boston for more space and better schools.

He says his commute now to his communications job in Cambridge usually takes about 45 minutes -- depending on the weather and when he leaves the house. By now, he's been commuting long enough that he knows where the usual backups are.

"When we get over the crest of this hill, we're going to see how much traffic there is," Loftis says, as I ride with him on a rainy Wednesday.

Sure enough, just over the hill the cars slow — down to 20 miles an hour, then 10, until finally, to a complete stop.

A bad sign, but actually far less so than expected. Within five minutes, traffic is back to moving near the speed limit. Except for a few other bottlenecks, that's where it stays for most of the ride.

If you drive to work, you probably know exactly where the bottlenecks are. The Leverett down ramp in Boston. The 495/Mass Pike connection in Hopkinton. Places where a lot of cars need to funnel through one road.

That's the key finding of a 2012 MIT study, which found that during rush hour, most roads in the Boston area are actually under capacity.

"We have enough space, in theory, but we are all filling up a few streets that get congested and give you the heart attack," she says.

That heart attack, Gonzalez says, is usually on connective roads, from which traffic spills out to the rest of the grid. A "spillbox," as she calls it.

"We have enough space, in theory, but we are all filling up a few streets that get congested and give you the heart attack."

But Gonzalez also looked at where the cars that fill up those roads come from. Her team found that if you cut 1 percent of drivers from the 15 Massachusetts communities that are the largest sources of commuters, the remaining drivers would have an 18 percent shorter commute.

But if you lowered the overall driving population by 1 percent — a non-targeted reduction -- you would see just 3 percent shorter commutes.

That's because, as Gonzalez says, traffic is non-linear. Doubling the number of cars on the road does not equate to a doubling in travel times.

Sometimes, those bottlenecks, or "spillboxes," are caused by lane drops.

Whether by an accident or construction, when the roadway decreases from two lanes to one, that is a recipe for a jam.

Merge Late! (If You're Going Slow) 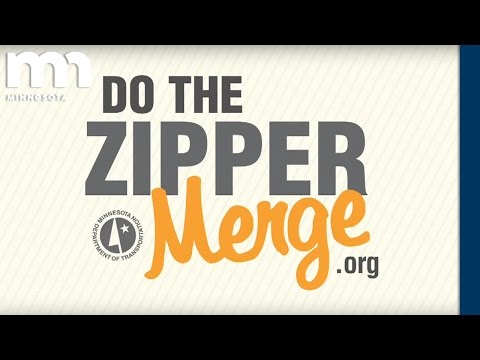 But traffic engineers in Minnesota have a theory about how to alleviate that problem — a theory that has been tested in practice.

A few years ago, the state aggressively encouraged drivers to merge late — that is, use both lanes for as long as possible and merge at the last second.

"Instead of everyone being in one single lane, they're actually split up between the two lanes on the approach. And when you do that, it ends up being a 40 percent reduction in the overall length of the queue," says Ken Johnson, a traffic engineer with the state's Department of Transportation.

When you merge early, you waste a free lane. You force traffic to squeeze into one lane earlier than need be — and you make the line of stopped cars even longer.

Further, when there's a less-used lane going 20 mph faster than the one next to it, that encourages what Johnson calls "negative behaviors."

"You've got queue-jumping, where people are in the lane that's slow and they see other people getting ahead," he says. "So they end up doing just a quick movement out and there's a chance of a collision with that."

Johnson stresses, though, that there are two caveats to this policy.

First: Zipper merging only works at slower speeds. If traffic is moving at highway speeds, it's not safe to merge at the last second, and you should merge as soon as you can safely.

Second: It doesn't cut down the time of the traffic jam by 40 percent; it cuts down the length. So instead of a five-mile backup, you would have a three-mile backup. But that can still cut down travel times for others — for example, those who want to exit the highway before the lane merge.

But what about the phantom traffic jams? When there's no lane drop or bottleneck. Traffic just suddenly, and inexplicably, stops — and then starts moving again.

"All it takes is one quick step on the brake and then the next person and the next person, and it just filters back and goes upstream," Neil Boudreau, a traffic engineer with the Massachusetts Department of Transportation, says in an interview.

"Inattentiveness, lane changing maneuvers, following too closely are some of the key causes. Basically, there's a headway," Boudreau explains. "You should have so much room in the car in front of you."

This happens even when there are zero obstructions.

In 2008, researchers at Nagoya University in Japan set up a circular track and had people drive in a circle, with instructions to leave a safe headway between them and not to slow down. In just a few minutes, cars were stuck together in an endless loop of bumper-to-bumper traffic. Watch: 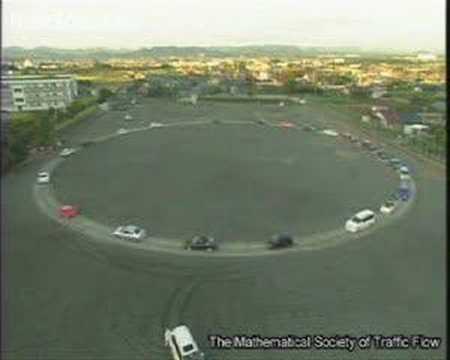 For more on the shockwave effect, see this interactive from KQED's Lowdown.

In this case, he says, aggressive drivers can actually cause more traffic.

But as for what to do about that, Boudreau is unsure. The state is planning a pilot program like what Minnesota did to encourage zipper merging. But he is unsure whether a simple PSA campaign will yield tangible benefits when it comes to not driving aggressively.

"I wish there was a nice pill we could give folks," he jokes. "[I'm not sure what can be done], aside from the future of transportation — if we ever get to the connected vehicle and having the vehicles maintain a headway."

Still, Boudreau admits that just making drivers more polite won't solve the problem of traffic. To do that, you need to get cars off the roads.

That's not happening anytime soon for our Acton-to-Cambridge commuter Loftis, who used to take commuter rail, but went back to the car amid the massive MBTA delays of the winter of 2015.

On this day, he pulls into his Cambridge office just before 8 a.m., about an hour after leaving the house. Not bad, by his estimation.

But Loftis has long since taken a zen approach to driving.

"What I like about commuting is there's a real divide between where I work and being home," he says. "And then it's also in a car by yourself, it's the only time that I have for any personal time. When you're by yourself, you control your own environment, which really the thing you don't get to do when you're on the T."

It's for that reason that Loftis gets up earlier than he needs to to battle traffic into the Boston area every day.