Question 2 on the November ballot will ask voters if they support giving Massachusetts the authority to lift the cap on charter schools. As it stands, no more than 120 charter schools are allowed to operate in the state; there are currently 78 active charters.

A "Yes" vote on Question 2 would give the Massachusetts Department of Elementary and Secondary Education the authority to lift the cap, allowing up to 12 new charter schools or expansions of existing charters each year.

Priority would be given to charters that open in lower-performing districts. New charters and charter expansions approved under this law would be exempt from existing limits on the number of charter schools, the number of students enrolled in them and the amount of local school districts' spending allocated to them.

A "No" vote would leave the cap as it stands today. If passed, the proposed law would take effect Jan. 1, 2017. 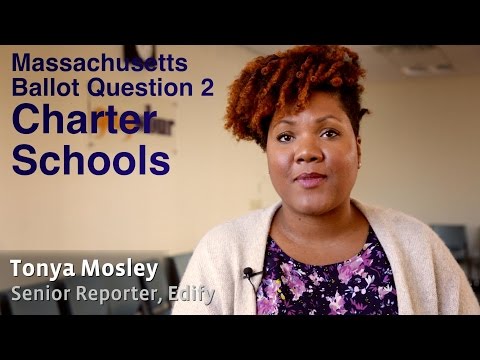 The poll, conducted for WBUR by The MassINC Polling Group, has a margin of error of 4.4 percentage points.

Currently, about 40,000 students, or a little more than 4 percent of Massachusetts elementary and secondary students, attend charter schools. More are on wait lists: Although the numbers have been disputed, the education department cites a figure of 33,903 for the 2015-'16 school year.

For some parents, it's a complicated issue.

As the front desk manager of a charter school in Boston, 38-year-old Sandra Marques spends her days helping others. When she’s not dealing with sick students or helping out teachers and staff, Marques is on the phone -- answering calls from nervous parents who are desperate to find a good school.

"You know, a lot of them call and they say, 'Can I transfer in the middle of the year?' Or 'Can I just sign up for your school?' " Marques said. "And I say unfortunately no, it’s a lottery process."

But Marques is dealing with the same dilemma at home. Her oldest, now in college, went to public school in Cambridge. Her middle daughter just received a full scholarship to a prep school. But now she lives in Lynn -- and she’s already worried about where her 19-month-old son will go to school.

"I’m just really, really, really concerned," Marques said. "I’ve lost a little sleep. And people tell me it’s early and anything can happen, but, you know, you’re not a mom if you’re not worrying."

Marques has done research on both the public schools and the one charter school in her town -- but she said none of them were a good fit for her older children.

"I know people who have sold their homes to get their kids into the better school districts," she said. "I don’t have that luxury."

Eileen O'Connor has heard from parents like Marques. O'Connor works with Great Schools Massachusetts, an organization that is pushing to lift the cap.

"I feel very strongly that parents should be given the right to choose where to send their kids to school," O'Connor said, "and that should not depend on the ZIP code or the city or town that they live in."

Steve Crawford -- with Save Our Public Schools, a group pushing for a "No" vote on Question 2 -- says this idea is ridiculous.

"It’s a reckless proposal that will seriously damage the schools that educate 96 percent of the students in Massachusetts," Crawford said.

Students who choose charter schools take public funding with them for their charter tuition. Save Our Public Schools argues that, while charters take money from the state and from local districts, there is no uniform oversight, and the performance levels of charter schools vary.

"It’s not just about a per-student cost," he said. "It’s all of those fixed costs that the local taxpayers have voted to commit to their local schools, and these privately run charters are just draining it out of communities all across the state."

In a perfect world, Marques said, parents wouldn’t have to make these choices.

"What I wish is that the charter schools, and the traditional public schools, I wish they would partner," she said, "because all of us just want the best for these kids."

Radio Boston, along with UMass Boston and The Boston Globe, host a debate Tuesday, at 3 p.m., on the charter school ballot question.

Update: We talked with Sandra Marques after she responded to our callout for experiences with charter and district schools. The deadline for responding to that callout is Sept. 16, but if you have an experience or information to share, please be in touch by email or in the comments. Subramaniam Vincent, a 2016 John S. Knight Journalism Fellow who tweets @subbuvincent, helped Edify create and manage this project, which we will continue to use to inform our education coverage.

This article was originally published on September 13, 2016.