When Jo Boaler arrives in Massachusetts to teach her new approach to math instruction, she's received as something close to a rock star.

Boaler — who teaches at Stanford — travels the country with a message of hope for teachers. There are obvious flaws, she says, in a system that uses stressful tests to decide who's got a brain for math and counts on rote memorization to build mathematical curiosity. With her talks, her research, and a website full of videos about mathematics, her mission is not to build memories — but mindsets.

I spoke with Boaler as part of Edify's series on math education in Massachusetts. Our conversation, condensed and edited for clarity, follows.

Tonya Mosley: I'd love for you to go into a bit of detail on the growth mindset as it relates to math instruction, and how you foster it.

Jo Boaler: With a growth mindset, people really believe they can do anything and they can learn anything. And people with a fixed mindset really think their intelligence is fixed — so they can change things only a little bit. I teach undergrads at Stanford, and they come with a very fixed mindset!

So we have a few big messages we give. First of all, we say there's no such thing as a math person. Everybody can grow and change their brains and learn any level of math. And this myth that people are born with the math brain is very important to get rid of.

Then we tell them that mistakes actually do amazing things in your brain and when you make a mistake, synapses fire in the brain — more than if you get it right. There's brain strengthening, brain growth — all sorts of good things are happening when you make mistakes in the brain. So mistakes are very important.

That goes against so much of what maybe the parents of students today have learned — that getting everything right is how you know you're learning.

Yes, exactly. I mean, in maths — we say “maths” in England! — I think what people believe about math is pretty wrong. And everything that goes on in math class is pretty wrong. We know that when you're making mistakes — when you’re challenged — those are the best times of brain growth.

And then we also know the speed and time pressure is damaging for the brain. So when we give kids timed tests, it shuts down the part of the brain that we need to use when they are taking timed tests.

That's really interesting, because we get our data on how students do in math class, or in classes in general, from timed tests. How do you suggest educators measure their progress instead?

Teachers always know how well kids are doing, so you really don't need to test them. You really easily have teachers write down what kids know and can do. The kids themselves can also self-assess and tell if things are strong or not. They do that with extreme reliability. You can ask kids make a project, if you want, that tells us about what they know and can do.

And most tests used do not assess what's important anymore. They might assess whether you are computationally fast — but that's the one thing computers do and we don't need humans for.

We just saw the international scores of how math students were doing nationwide and in the state of Massachusetts. For instance, we're number one in the United States and then in the world we're further behind. What's your first reaction to that, because it's all about standardized testing?

PISA tests are definitely better because they rely on problem solving. It's not one of the rote, multiple-choice, procedural tests that go on in the United States all the time. I have an article about the PISA assessments in the current edition of Scientific American Mind magazine, and I worked with the PISA analyst. And one thing that the last PISA did was as well as test kids mathematically, they also assessed their approach to learning.

So this article reveals what we found, which is that, when we divide kids by their learning approaches we put them into different classes by the learning approach. Some kids are "memorizers." They think that in math, you just have to memorize lots of methods — every step. And the U.S. has a very large number of "memorizers" — it's in the top third of countries in the world [by that measure].

Andrew Hacker at Queens College wrote the book, "Math Myths and Other STEM Delusions." He believes that teaching higher-level math concepts is scary for many kids, and a waste of time after a certain point. I'd love to know what you think.

Here's my response to Andrew Hacker. I totally sympathize, and I would say algebra as it's currently taught is not needed — because it is taught in a terrible way. It’s used to traumatize kids. It crushes their confidence and it makes them feel they can't do math.

But I do think the good algebra that kids should be getting is really important for their future, and that it would be really good if we actually taught math in the ways it should be taught.

We brought 81 kids onto campus last summer and we taught them algebra for 18 days. They were all kids who had had bad experiences. And we taught them algebra through visual creative math. That's how you understand algebra best: you see it. At the end of 18 days, these kids improved their standardized test scores by an average of 50 percent. That's equivalent to 1.6 years of school growth. And they spent 18 lessons with us.

So why aren't more districts pursing that course?

That's a really hard question. We know what works. It's not rocket science. We've had decades of research on it. So that's the million-dollar question: Why isn't that happening in schools?

I would say many teachers don't have access to research, so they don't know that there are better ways than how they were taught. Then, even if teachers do get access to good ideas, they're often given really awful books and pacing guides by their school district.

We try to tackle that with our YouTube site. [YouCubed]. We have over 100,000 subscribers. What teachers will say is, "It's really hard for us to do this, because we have all these... district tests on procedural math." They really want [more], and this is why we have so many people on our side. They're so excited by the ideas.

For a look at YouCubed, the online hub for Jo Boaler's math instruction, see this video on mathematical mindsets Boaler made with some of her students: 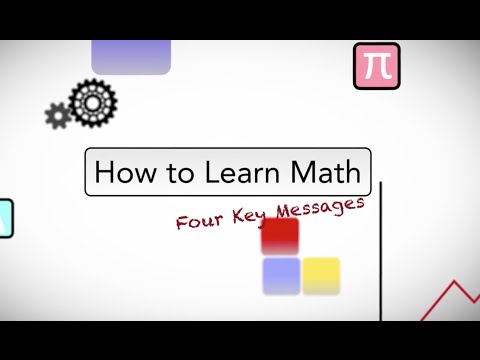