Many of you may remember the debacle caused by Mattel in 1992 when it was forced to recall Teen Talk Barbie after parent and teacher groups complained.

Alongside phrases like, “Let’s go shopping!” and “Do you have a crush on anyone?,” Barbie was heard to say, “Math class is tough!” (Understandably, the National Council of Teachers of Mathematics was not pleased.)

I had left the Barbie demographic by then, and I was never much of a Barbie girl anyway. I was the girl who nearly burned my bathroom down trying to replicate an experiment I’d seen on Nickelodeon’s “Mr. Wizard’s World”.

I now have two elementary-aged daughters, and the appearance of STEM toys for girls has created a firestorm of internal debate for me.

On one hand, I’m thrilled that entrepreneurs and toymakers are beginning to recognize the diversity of childhood interests and leaving behind the stereotype that girls just want to shop and date and be pretty.

On the other hand, there’s Project Mc2.

Last year my five-year-old, having seen the commercials on Cartoon Network, asked for anything Project Mc2- related for the holidays. On Christmas morning, when she ran over and opened McKeyla’s Glitter Light Bulb Experiment, I finally got a good look at what I had bought.

Project Mc2 began in 2015 as a three-episode series for Netflix, produced by Dreamworks, about a teenaged super-spy named McKeyla who befriends some of the “smart girls” at her new school.

The toy company MGA Entertainment released dolls of each of the main characters, along with “experiments.” The dolls are your standard fantastical fare, with unrealistic proportions and heavy make-up. Also included are combs for their hair and accessories for the outfits. What accessories, you ask? Glasses, of course.

The glitter light-bulb “experiment” was a very small plastic bulb that came ready to screw into a base with an LED light. (Battery not included.) Our job as “engineers” was to fill the plastic bulb with our own water, glycerine and glitter (“household ingredients,” not included) and screw the base onto the bulb. Eureka! Just like Thomas Edison.

While the five-year-old moved on to something Shopkin-related, I sat and stewed.

How was this being marketed as a STEM toy? Where was the engineering? What could my child possibly learn by screwing in a light bulb? And why did the doll look like a hyper-sexualized, hipster Mean Girl?

When I started digging into Project Mc2, I found a name I recognized. Danica McKellar plays the head of the spy agency and McKeyla’s mother in the web series.

McKellar played Winnie Cooper, the ultimate girl next door on “The Wonder Years.” But she left acting to go to college and received a Ph.D. in mathematics in 2005. There’s even a mathematical theorem that bears her name. Winnie Cooper is involved! She’s even credited as a co-creator!

I tried to contact McKellar, who recently released a children’s book called Goodnight Numbers, but she was unavailable for comment. The titles of some of her other books, meant to engage girls in math concepts, shed some light on to why she might have been attracted to Project Mc2. The covers of Kiss My Math and Girls Get Curves: Geometry Takes Shape feature McKellar with full make-up and a coy smile.

While her goal of making math accessible to teenage girls is noble, do girls’ toys need exaggerated stereotypes to hold their interest? Do all STEM toys for girls need to feature characters that look like Harajuku girls to be successful?

The answer is no. And the proof is GoldieBlox.

I talked to Debbie Sterling, CEO of GoldieBlox, Inc. Sterling graduated from Stanford with an engineering degree in 2005. After seeing what the toy store had to offer for girls, she found her mission.

“I looked down the pink aisle, and I was just shocked,” she said. “I realized there is such an opportunity to do right by our girls.”

Sterling’s first prototype introduced the toy’s main character, Goldie, as an 11-year-old girl who likes to tinker and build things. In an accompanying storybook, Goldie wants to help her dog chase its tail.

“One of the things I observed early on was that girls really love narrative-based play,” Sterling said. “My first ‘aha moment’ was to integrate narrative and story-telling into construction play.”

Following along with the story, girls use the materials in the toy to build the belt drive and spin a plastic dog.

“I could have had her build a nail salon or a spa,” Sterling said. Instead, she asked herself, “What would Goldie build?” 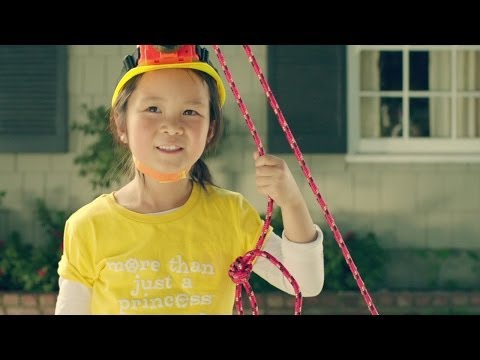 In 2014, the final product, GoldieBlox and the Spinning Machine, won two TOTYs (Toy of the Year Awards from the Toy Industry Association). Multiple action figures and play sets followed — and when it came time to design a doll, Sterling was careful to retain the realism.

Dr. Lynn Liben, professor of child studies at Pennsylvania State University, has conducted research with GoldieBlox toys, as well as Barbie products. She applauds the mission of GoldieBlox to engage girls with science and math.

But she sees limits to the very idea of STEM toys made especially for girls. “It’s not just what they play with,” she said. “It’s how they play with things.”

With toys like Project Mc2, “you’re labeling it as ‘boys stay away,’” she said. “This is not a toy that’s going to encourage co-educational play.” Liben says gender-isolated play means missing out on the benefits of observing and mimicking other styles.

A rule-breaking play style, Liben says, tends to be encouraged more in young boys. As a result, they can be less afraid of failure and more likely to search for creative solutions to problems.

Failure is an important part of STEM learning, and Sterling incorporated it into the original Goldie engineering story. Then came beta testing for GoldieBlox and the Spinning Machine.

Young girls seemed to love working through the activity in the story. But when building the belt drive, Goldie fails the first time. That meant, while following along, the play-testers would fail too.

“They got so frustrated that they wouldn’t turn to the next page,” she said. “Some of them pounded their fists on the floor… and stormed out of the room.” Sterling remembers feeling crushed at the idea of damaging girls’ confidence. After the test, she changed the story so that Goldie still makes a mistake — but the real-life experimenters don’t.

“We want to encourage tinkering and open-ended play,” she said. “But many girls are not familiar with building yet because they’ve been so conditioned down the doll aisle. We don’t want to set them up to fail.”

After all these conversations, I wanted to know if my girls would face the same frustration. I asked my eight-year-old if she felt like not getting something right would keep her from playing with a toy.

“Getting things wrong creates synapses. It’s how the brain grows.”

“Right,” I said, immediately reaching for my phone to look up "growth mindset."