If Romeo were to be cut into little stars, as Juliet envisions in the iconic tragedy bearing her and her paramour’s names, we’d be looking right up at him in Commonwealth Shakespeare Company’s staging of “Romeo and Juliet” (through Aug. 6) on Boston Common.

This year’s alfresco offering of free Shakespeare in the heart of the city, the Bard’s 420-year-old account of star-crossed teen passion and very unfortunate timing, features twinklers both literal and metaphoric. It also takes a play that has had its Verona scooted around the globe from Italy to Manhattan to Louisiana to California to Twitter and renders it much as it might have looked in Elizabethan times — except, of course, that Juliet is a young woman and not a boy in drag. And not everyone is Anglo-Saxon.

For the first time in 22 years of Shakespeare on the Common, founding artistic director Steve Maler has relinquished the reins for this production. Here, American Repertory Theater resident director Allegra Libonati helms a “Romeo and Juliet” that is straightforward, fast-moving and just plain moving. Scenic designer Julia Noulin-Mérat sets it in a stony, flower and vine-strewn Verona over which Juliet’s famed balcony hovers prettily. And costume designer Neil Fortin drapes the citizenry in flattering, flexible duds that suggest both the 16th century and rival sports teams. (On opening night, he was abetted by a breeze that blew Juliet’s sheath so artfully you’d swear the effect was planned.)

In the title roles, both massive and lyrical, the gutsy Juliet of Gracyn Mix (despite looking uncomfortably like a Disney princess) is an apt combination of swelling emotion and quick thinking: You can see the rushed hormonal and synaptic connections produced by every untimely event. And John Zdrojeski’s Romeo is alternately melancholy, goofy and giddy, with a refreshingly natural delivery. Eventually this man-boy regresses and throws an adolescent tantrum — just before finally getting his adult act together. (Juliet, you might say, was born great; Romeo has greatness thrust upon him.)

OK, does anyone not know the plot of “Romeo and Juliet”? Romeo is a Montague, Juliet a Capulet — two families separated by an “ancient grudge.” When the adolescent scions of these provincial enemies meet by chance and spark, wildfire rages, burning both their houses to cinders of pained reconciliation. Along the way, blood and tears are spilled as pheromones and violence erupt in equal measure.

But should audience members be experiencing Shakespeare’s play for the first time, its plot is dizzyingly recounted in Libonati’s breakneck staging. The first act is even recapped as a speedy prologue to the second (perhaps for drop-ins who have come upon the pageant in its middle). After all, this is the marvel of the civilizing civic phenomenon that is Shakespeare on the Common: You need not plan ahead and buy a ticket, but can just wander by and be captivated.

As the literary critic Harold Bloom remarks, Shakespeare “shied away from depicting the death of love rather than the death of lovers.” (Only Hamlet, he observes, falls out of love.) The implication is that Romeo and Juliet are fated to their sacrificial end, all for the greater good. Indeed, in Libonati’s production, the gorgeously matched young lovers begin and end their twinned journey on pedestals — the production’s final image a living recreation of the statue promised by the repentant Montague and Capulet to commemorate their “glooming peace.” (Here Mrs. Montague, who dies of grief in Shakespeare’s play, is left standing to do the honors.)

“Romeo and Juliet” is a play well suited to the expanse of Boston Common (this is CSC’s second staging of the work). Its emotions, whether loosed from wellsprings of love or hate, are larger than life. There’s lots of sword fighting and verbal sparring in the streets (the fight choreography is by Angie Jepson). And the play encompasses not just the lovers, but an entire town. As Romeo says, “There is no world without Verona’s walls.” Indeed, in this production, both revelers and combatants spill off the stage and into the crowd. Equiano Mosieri’s imposing Friar Laurence even prompts the spectators to finish a few of his choicer sentences (and they do).

There are also some showboating secondary characters to root for when the ill-fated passion of the titular two seems to contain more poetry and emotion than we can bear. Here, though Romeo and Juliet are white, thus freeing the Montague/Capulet enmity from racial implications, their community of relatives and cohorts is unselfconsciously and refreshingly diverse.

Among the supporting players, Kario Marcel is a nimble Mercutio, cocky and jesting pal to Romeo and kinsman to Escalus, the Prince of Verona (played by Kaci Hamilton, who arms her formidable female royal with excellent diction and a good bark). Modern audiences may not catch all the erotic implications of the glorious set piece that is Mercutio’s Queen Mab speech, but that’s not because Marcel isn’t putting them there. Even at the brink of death, the clever character makes a joke, but, in Marcel’s rendering, he also turns on a dime to condemn his warring compatriots in terms both guttural and powerful.

As Juliet’s Nurse, Ramona Lisa Alexander exudes warmth and a lusty irrepressibility without ever being coarse. CSC vet Fred Sullivan Jr. is a Capulet exuding an arresting mix of bonhomie and tyranny. And Mosieri’s Friar, his dreads piled atop his head, his medicine bag full of ominous flora, is a strong if somewhat exotic voice of reason.

As for Mix and Zdrojeski’s relentlessly swooning lovers, there must be crack in their saliva because they simply cannot keep their lips off each other. From first kiss to last breaths, the two exhibit a passion that is sudden, overwhelming and credible. And Mix, though her impatient Juliet can oft be found wrapped like a Bedouin in her bedclothes, acquits herself beautifully by the Bard’s rapturous verse.

Of course, Juliet, as resolute as she is impetuous, is the most magnificent creation of this early tragedy (written when the Bard was about 30), Romeo the more callow courter. That said, Zdrojeski, once slapped into manhood by the Friar, matches Mix in faith and resolve. The two keep their mutual, aching ecstasy in the air for what seems an impossibly long time, floating it like a big, doomed balloon over Boston Common. 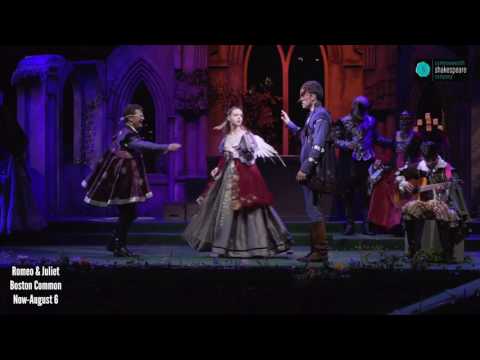