One of last year’s very best films makes its belated Boston debut at the Brattle Theatre this week (through Feb. 8). Writer-director Robin Campillo’s electrifying “BPM (Beats Per Minute)” is a pungent piece of social history, chronicling the early days of the ACT UP movement in Paris with bawdy humor, bottomless compassion and a rebel yell.

It’s the early 1990s — a time when more than a few self-proclaimed moral arbiters happily turned a blind eye to a mysterious disease killing drug addicts and homosexuals. So resourceful young folks took to the streets of cities all over the world, employing confrontational guerrilla theater tactics to raise awareness of an epidemic that was deemed by many as inappropriate for discussion in polite company. As ACT UP’s pink triangle T-shirts angrily announced: “Silence = Mort.”

If you were around at the time, the movie brings it all back in a rush that will get your blood up. And even if you weren’t, there might be a familiar ring to arguments made by many elders in the picture during their attempts to dictate what are “appropriate” and “respectful” times and places for protests. (The more things change…) At 140 minutes, Campillo’s film throbs with urgency, the nimble editing constantly interrupting dialogue-heavy scenes with antsy fragments and flickers of action. We in the audience may have the benefit of historical perspective, but the characters onscreen are running out of time.

Our viewer surrogate is Nathan (played by Arnaud Valois), and it is through his gentle eyes we are introduced to this motley crew of activists holding their meetings in a classroom at night. The Paris chapter is run by Thibault (Antoine Reinartz) — a cool-headed centrist hoping to win over reasonable hearts and minds. But our affections (and young Nathan’s) are quickly captured by the irascible Sean, brought vividly to life in a star-making performance by Nahuel Pérez Biscayart. With an impish charisma and mordant humor, Sean leads the pack of mouthy radicals who sit in the back of the classroom every week, eventually embarking on a cautious affair with the HIV-negative Nathan by asking, “Am I your first poz?”

“Poz” (for “positive”) is the group’s slang for those infected, and Campillo’s screenplay (penned with Philippe Mangeot) delivers a crash course on AZT, DDI, protease inhibitors and all sorts of antiviral minutiae. As in director David France’s marvelous 2012 ACT UP documentary, "How to Survive a Plague" — which would make a terrific, if traumatizing, double feature with "BPM" — we see a generation of young men and women forced to self-educate in street-level DIY med schools, by tragic necessity sometimes becoming more knowledgeable than physicians twice their age. 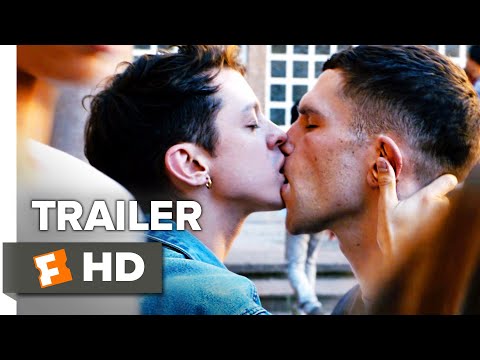 But “BPM” reminded me most of a war movie, with our platoon plotting disruptions at medical conferences and pharmaceutical offices, storming the premises blasting air horns and tossing balloons full of fake blood. There’s a powerful visceral thrill to these protest sequences, a dynamic sensation of fighting to be seen and heard by a crew whose rowdy spirits begin to sink as our beloved characters inevitably grow sicker. The explicit, lusty sex scenes between Nathan and Sean give way to tender scenes of clinical care-taking, the latter’s advancing illness seemingly snuffing out the movie’s pilot light.

Campillo frequently cuts to his characters dancing in a darkened disco, one where we can’t see the walls so they appear somehow suspended in limbo. It’s a visual release valve that on one hand counters the film’s talkiness and sterile settings, but perhaps more importantly asks us to take time and appreciate these people’s bodies in full beauty and good health, before the ravages we know are to come. He often ends these interludes with the camera zooming all the way down into a microscopic vision of germs and microbes drifting through the air, the harmless-looking specks of dust now ominous and potentially deadly.

Of course “BPM (Beats Per Minute)” is a terribly sad movie, but its kinetically cathartic epilogue sent me out soaring. Campillo comes up with a glorious final act of defiance for Sean, and in sync with the air horns, whistles and electronic drum machines conjures a thrilling, impressionistic collage of dancing, screwing, crying and, most importantly, fighting on. Even though it takes place 25 years ago “BPM” just might be the movie we need right now because you’ll say goodbye to these characters wanting nothing more than to hit the streets and follow their example -- to live, to resist.