I had a friend years ago who was the seventh sibling in a sprawling family. Making small talk, someone asked him once what it was like to have so many brothers and sisters.

Annoyed, he waited a beat, shrugged, and said truthfully: "I don't know."

He grew up in the family he grew up in. How could he say what made it different from someone else's? If asked about being an only child, I could give the same answer.

This country allows white people like me to walk around all day without ever considering that question. Historically, white supremacy is so ingrained into its fabric that many white people don't even see it there. Many even take personal offense when urged to acknowledge a systemic reality.

That's what the brilliant title of Claudia Rankine's "The White Card" refers to. It's an intense and achingly relevant play making its world premiere at the Paramount in a co-production between ArtsEmerson and the American Repertory Theater. Think of how often African-Americans are dismissed as simply "playing the black card" when explicitly identifying the ways that white supremacy operates in their lives.

So what does it mean to play the white card?

As Rankine (who also wrote the well-received poetry collection "Citizen: An American Lyric") hammers home in this intellectually rigorous but dramatically shaky piece, white people are rarely challenged to think about what it means to be white in America. What if they were instead compelled to think of themselves not as society's supposed norm but as a particular clan with an instinct to protect its position?

But as taut and intense as this one-act is — and it ends with a thunderbolt — its five characters feel more like mouthpieces for a point of view than fully-formed people. And what little action affects the play's progress occurs offstage. Charlotte undergoes a change in mind-set between scenes, but we merely get to hear her describe this after the fact; there are several details that would have made for compelling onstage moments.

"The White Card" is divided into two scenes. The setting for the first is a posh Manhattan apartment whose wealthy white residents are hosting a dinner party for a celebrated African-American photographer. Charles (Daniel Gerroll) and Virginia (Patricia Kalember) are art collectors who specialize in politically relevant work. When bringing up the new series by their guest of honor, Charlotte (Karen Pittman), Charles confirms with art dealer Eric (Jim Poulos) that it's still on-topic: "Still with a focus on racial injustice?" 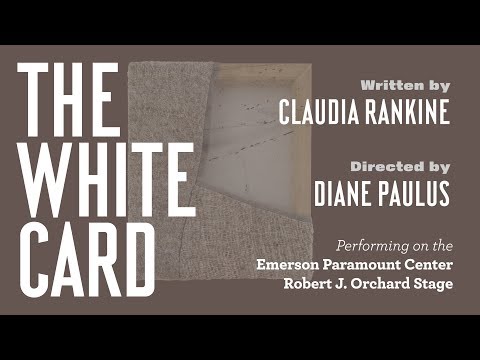 Charles and Virginia's college-aged son, Alex (Colton Ryan, who is excellent), is an activist who correctly identifies the paternalism embedded in his parents' advocacy of African-American artists. Even when amplifying the voices of the disenfranchised, they're still curating the narrative, using the depiction of brutalized black bodies to shake their fists at a racist system without interrogating their own place in that system, or showing any curiosity about the varieties of black experience.

As Charlotte pushes back at this attitude throughout an increasingly heated evening, the proceedings resemble an Agatha Christie story in which we wait for each well-intentioned white person to be revealed, in turn, as fatally misguided. Though he has a cogent grip on the dynamic here, even Alex seems to view Charlotte as a representative for all black people, speaking on their behalf.

The second act, set in Charlotte's studio in the present day (a between-scene video montage includes footage related to the Parkland school shooting), tightens the focus to the artist and Charles. It's about a year after the initial confrontation, and Charles feels wounded by Charlotte's decision to donate her recent series to a Harlem museum rather than selling it to him. She makes one more attempt to broaden his outlook.

The A.R.T.'s Diane Paulus directs the show, in a white-walled black-box environment built on top of the Paramount's main stage. (Scenic design is by Riccardo Hernandez.) It's a stylish staging, and the audience is compelled to look at itself, as the playwright intended. Peter Nigrini's projection design is also key, whether showing us the works of arts discussed in the show or delivering a searing final image.

The cast navigates the wordy material well, and Rankine observes the details of white complacency with piercing vision. No white audience member can depart the experience able to say he or she has never been challenged to confront the meaning of white privilege, and in that sense the play is clearly successful.

Yet Rankine seems more focused on prosecuting a case than forging something fully theatrical. We learn precious little about these people. Like Alex, the play itself places Charlotte in the role of the seen-it-all African-American who is there to provide all the correct answers and straighten the white folks out. And in stacking the deck heavily against chief antagonist Charles — his fortune comes in part from building private prisons, and, just to seal the deal, he even physically pushes Charlotte in anger -- Rankine makes it too easy for the audience to simply judge him rather than to be confronted with an urge to empathize.

There are ways to root timely political debate in a more three-dimensional, theatrical context. Anna Ziegler's "Actually" drills down into the issue of campus sexual assault by dwelling in ambiguity, challenging assumptions on all sides. Ayad Akhtar's "Disgraced" (which Pittman starred in on Broadway) depicts characters who come to difficult realizations about their racial attitudes as a direct result of the action unfolding onstage. I'm not advocating imposing false equivalence on a political argument. I'm just talking about storytelling technique. If "The White Card" can jettison three of its five characters for half its run time, as it does, how vital were they in the first place?

This is a play about the extent to which well-intentioned white people just don't get it. The sin that everyone but Charlotte keeps repeating is that they never listen. They hear Charlotte speak the truth of her experience and then they disagree with it. They mouth the right buzzwords but can't examine their own privilege because they just can't see it.

It may be that the playwright's chief intent here is to get a bunch of people into a room and simply deliver some truth. My job, not just as a theater critic but as a white American, is to listen to her. And there's much in this play that a lot of people really need to hear. Maybe the crucial interrogation in "The White Card" happens not between characters onstage but between them and members of the audience, or even among audience members.

This play ably achieves the objective of provoking conversation, and a facilitated one follows each performance. But to succeed more fully as a work of theater, it'll need to be more than the sum of its talkback.

"The White Card" continues at the Paramount Center through April 1.