Productions by the reliably inventive New York theater company Bedlam have the tendency to jolt you awake to the possibilities of theater. Bedlam was founded in 2012 by director-actor Eric Tucker and actor Andrus Nichols as just another troupe with a few very talented people and little money. The special effect it adds is inspiration.

Can't afford to pay a large cast? Try stripping down a couple of long, talky plays into showcases for a quartet of actors who busily switch from role to role at a rate of a couple per scene. Can't get the rights to the play you want to do? When Bedlam couldn't get its hands on the Clifford Odets selection it wanted to stage in repertory with Shakespeare's "Twelfth Night" a few years ago, Tucker instead staged two separately conceived versions of the Shakespeare, with the same five actors playing different combinations of roles.

George Bernard Shaw's 1923 play about Joan of Arc, "Saint Joan," was Bedlam's founding text. A bare-bones, four-actor production proved a revelation when Underground Railway Theater brought the troupe to Central Square Theatre in 2015 after it had become the toast of New York.

Now Bedlam's "Saint Joan" is at the Cutler Majestic Theatre, in repertory with a similarly streamlined "Hamlet," for the sixth stop in a nine-city tour. Director Tucker has re-created the distinctive Bedlam staging, but with a cast of four young actors who are newly deputized to represent the company: Aundria Brown, Kahlil Garcia, Sam Massaro and Aubie Merrylees. 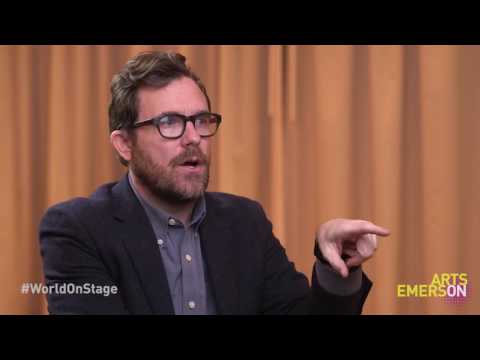 Audience members for the company's earlier productions of "Saint Joan" were compelled to visit the theater lobby during each of the show's two intermissions so the performance space could be completely refigured. That's not the case with this production. But working in the larger, less flexible environment of the Majestic, Tucker has taken pains to make the space feel more intimate.

Much of the action is played with actors moving about the orchestra section of the theater, whether shouting out questions to an on-trial Joan seated on the stage lip or frantically searching out the ghost of Hamlet's father. (Stretches of both those sequences were illuminated only by flashlights held by the actors.)

The audience is invited to move to onstage seating for most acts, and patrons who take advantage of this discover an expanded world of stage pictures, with the ornate interior of the Majestic now standing in as backdrop. John McDermott's elegantly spare scenic design exposes the upstage wall of the theater, and at times does much with four simple chairs.

It's not fair to these particular actors that it took me a while to stop missing Tucker's endlessly detailed characterizations in the host of roles he tackled in "Saint Joan" (he could spark a laugh by simply sipping some imaginary tea) or the joyfully reverberating energy that animated Nichols' performance of the title figure.

Yet it was still a bit of a jolt to see a production that had once felt like the fruit of the singular imagination of a specific group of artists turned into a portable version with a new cast. The inspiration in the concept and direction is still apparent, and a double-header of both shows on a Saturday showed this quartet of actors to be in fine, shape-shifting form.

Massaro is the biggest revelation as an eminently sympathetic Claudius, a man overly impressed with himself but also possessing a clear vision that invests his plotting with the patina of good governance. (Massaro and Brown are hilarious together as a popped-collar dude of a Rosencrantz paired with a Valley-girl Guildenstern.) The usurping king takes his rightful place in this production as a mover of events.

I've never before heard the same actor play Gertrude and Ophelia (as Brown does) or Polonius and Laertes (Garcia). Throughout both "Saint Joan" and "Hamlet" there's a thrill in watching these actors change roles with the tiniest of wardrobe adjustments and a physical shorthand that aids for quick and easy identification.

This cut of "Hamlet" is longer in some places than we're used to hearing and shorter in others — it's not clear, for instance, whether this production feels there truly is a ghostly incarnation of the murdered King Hamlet pulling the strings. One would think this opens up a fresh interpretation of young Hamlet's motivations, but Merrylees plays things at such an even keel that I never got a firm sense of the character's famous indecision or changes in mood. He's at wit's end, perhaps, but seems to sit within that state the whole time.

Everybody gallops through text here, particularly in "Hamlet," though the verse sometimes sits uneasily in these actors' mouths. This makes for a quick-paced presentation that feels casual but not necessarily natural. The emphasis on pace leaves little room for the psychology that's typically foregrounded in "Hamlet." Tucker's direction downplays the text's best-known moments, which is understandable with such familiar material, but after the fact I actually found myself questioning whether certain key soliloquies were indeed included in the cut. There's a fine line between admirably casual and just tossed-off.

Shaw doesn't write a ton of dramatic intrigue into "Saint Joan" — it's an episodic tale in which the country maid wins over a series of progressively more-powerful people. They all doubt her at the start but she impresses with battlefield heroics and a headstrong nature they feel compelled to try to stifle. It's a quietly terrifying arc, though, as Shaw explores the seeming paradox of the Catholic Church applying all of its good-faith practices and procedures in service of persecuting a woman who would later be canonized as a saint. Brown seems most at home in the character during an epilogue that revisits Joan's spirit on the occasion of her 20th century canonization.

There is a large amount of ingenious stage business throughout both shows. "Hamlet" includes two beatbox interludes and a visually arresting sequence in which the four actors grapple with each other, in slow motion, in the dirt of Ophelia's grave. When Merrylees and Massarro bring to life a roomful of tittering aristocrats in "Saint Joan" you wonder for a moment why anybody ever thought a separate actor was necessary for each role. It's very fine stuff.

After attending a doubleheader (each show has three acts and lasts about three hours), I was glad to applaud the director's vision and the technical achievement of these actors. But I rarely found pause to feel anything very strongly along the way. To borrow from Gertrude's pithy rebuke of Polonius, I think I would have appreciated a bit more matter and a touch less art.